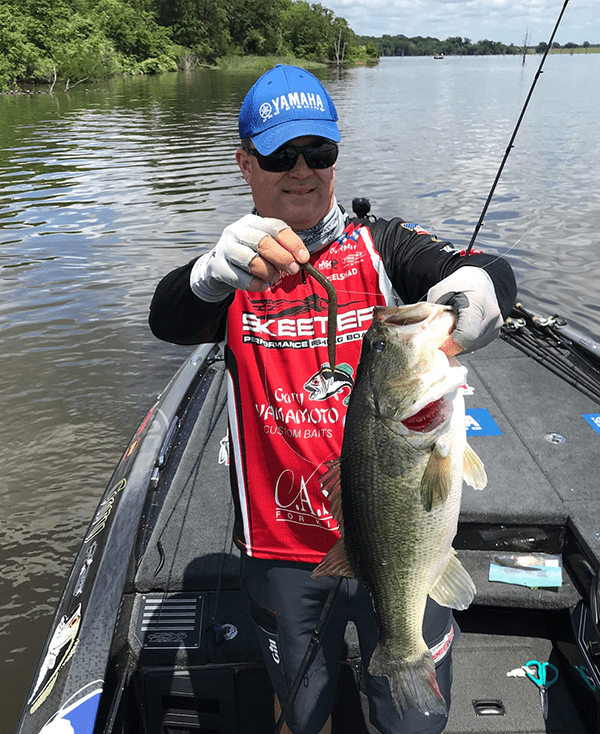 Miscues always become magnified when they’re seen by contemporaries who never seem to forget them. It’s as true in professional bass fishing as it is in everyday life, as veteran Yamaha Pro Jay Yelas can attest. Not long ago he was reminded once again of a little mistake he and his wife Jill made early one morning while launching at a boat ramp at Lake Norman more than 15 years ago.

“We were both really, really tired that morning,” remembers Yelas, “so after Jill launched me for a day of practice, she planned to go back to the motel and sleep several more hours. I’d flown in late the night before and was wondering how I’d stay awake on the lake.

Without checking to see that the boat was free, Jill drove back up the ramp and started across the parking lot. She was planning to unhook the trailer so she’d have the vehicle if she needed it.

“There I was, still sitting in the boat as she drove back into the parking lot,” laughs Yelas, “and all the other pros in the launch line were looking at me and laughing. They knew exactly what had happened. When Jill finally stopped and got out to unhook the trailer, she was totally surprised to see the boat – and me – still there. She had never looked to see if the boat had launched. I’m just glad she didn’t go all the way back to the motel.

“All of this would have been forgotten long ago if other pros hadn’t been there and seen what happened. Mark Menendez, another Yamaha Pro who was at the ramp that morning and saw it, reminded me of it while we were launching for a tournament earlier this season.”

Sometimes funny things happen off the water, too, notes the Yamaha Pro, such as his trip to Hollywood in 1993 when he was one of five nominees for an ESPY® Award as the Outdoorsman of the Year. He bought a new suit for the event, but he and Jill could not agree on which color his new dress shirt should be. Yelas wanted a lavender shirt but Jill insisted on a pale pink one.

“I finally bought a lavender one, because I was the one who would be wearing it,” points out the Yamaha Pro. “We were flown to Hollywood where a limousine was scheduled to pick us up at our hotel at 4 p.m. to take us to the awards ceremony. At about 3:30 p.m. I started dressing and when I opened my suitcase, my new shirt wasn’t there. I had forgotten to pack it, and I didn’t have any other shirt to wear with the suit.

“In a panic I called the hotel’s front desk and was directed to two men’s clothing shops just down the street about two blocks away. I trotted down the sidewalk to the first one. When I asked for a lavender shirt, they politely directed me to the second men’s shop. By then it was about 3:45 p.m. and I ran to that shop.

“Panting and sweating in the Southern California heat, I asked if they had any lavender dress shirts. They said no, but asked if I would be interested in a pale pink shirt they had in my size. I didn’t have any choice, or any time to think about it. I bought the pink one, and ran back to the hotel, where Jill started laughing at my predicament. She had that ‘I told you so’ look on her face, too.”

Despite having to wear the pink shirt, the Yamaha Pro won the ESPY® Award that night, beating an Olympic marksman, a snowboarder, and two Labrador Retriever dogs that had also been nominate