2 Terry Catch- Swinging a crappie into the boat is part of the fun of any crappie trip. Here, Saldeen gets in on the fun.

Crappie Tips from a Special Guide 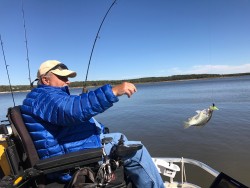 Things many fishermen take for granted – something as simple as getting into a boat – are a bit complicated for Terry Saldeen.

Saldeen, a partial quadriplegic, spends his life in a motorized wheelchair. But that doesn’t stop him from going crappie fishing on Truman Lake in west-central Missouri. It’s just … well, complicated.

While able-bodied fishermen just hop into a boat, Saldeen relies on a high-tech lift to remove his heavy wheelchair from the back of his truck. Then after his wife or another able-bodied helper backs his pontoon boat into the water, he uses a ramp he designed to get on board.

By now, though, that’s routine for Saldeen, 57, who lives in Warsaw, Mo. He has been paralyzed since he was 14, when he was injured in a diving accident on the Mississippi River. At the time, he said, “I was too ornery to let it slow me down.”

Today, he follows the same mantra. He is an avid crappie fisherman and even runs the Fat Slabs Guide Service. He caters to other disabled fishermen, striving to show them that they can do many things they never envisioned. Like reeling in a slab crappie.

“I took a woman who was a full quad out fishing,” Saldeen recalled. “I had her use an electric reel, and she just had a great time. She had a smile that was ear to ear.

Saldeen has shown many disabled people that they indeed can accomplish big things in a fishing boat.

“I try to instill in people that if you want something bad enough, you can do it,” he said. “You can’t wallow around in self-pity.

“I’ve taken a lot of disabled people fishing and we’ve had a great time.”

But Saldeen’s clientele is made up of more than just the disabled. He also guides able-bodied fishermen, many of whom stay at the Reel and Trigger Resort that Saldeen’s wife manages.

“Some of them are a little skeptical at first,” he said with a laugh. “They think that just because I’m in a chair, I can’t get around.

“But I change their mind on a hurry when we start catching fish.”

Saldeen requires the assistance of an able-bodied person, usually his wife, Lisa. While she is recovering from rotator cuff surgery, his friend, Mike Piers, has been assisting.

But make no mistake, Saldeen does the guiding. He sits in his wheelchair at the bow of his pontoon boat, with his fish locator and trolling motor in front of him. He uses a remote control to run the motor and get customers over brush where he is marking fish.

Even in a wheelchair, he is remarkably mobile in the boat. “This wheelchair will spin on a dime,” he said.

Saldeen has caught a lot of big crappies out of that chair. Consider a trip in mid-October.

After Piers steered the boat to a bluff where he and Saldeen had caught fish the day before, Saldeen glanced at the fish finder and announced, “They’re still here.”