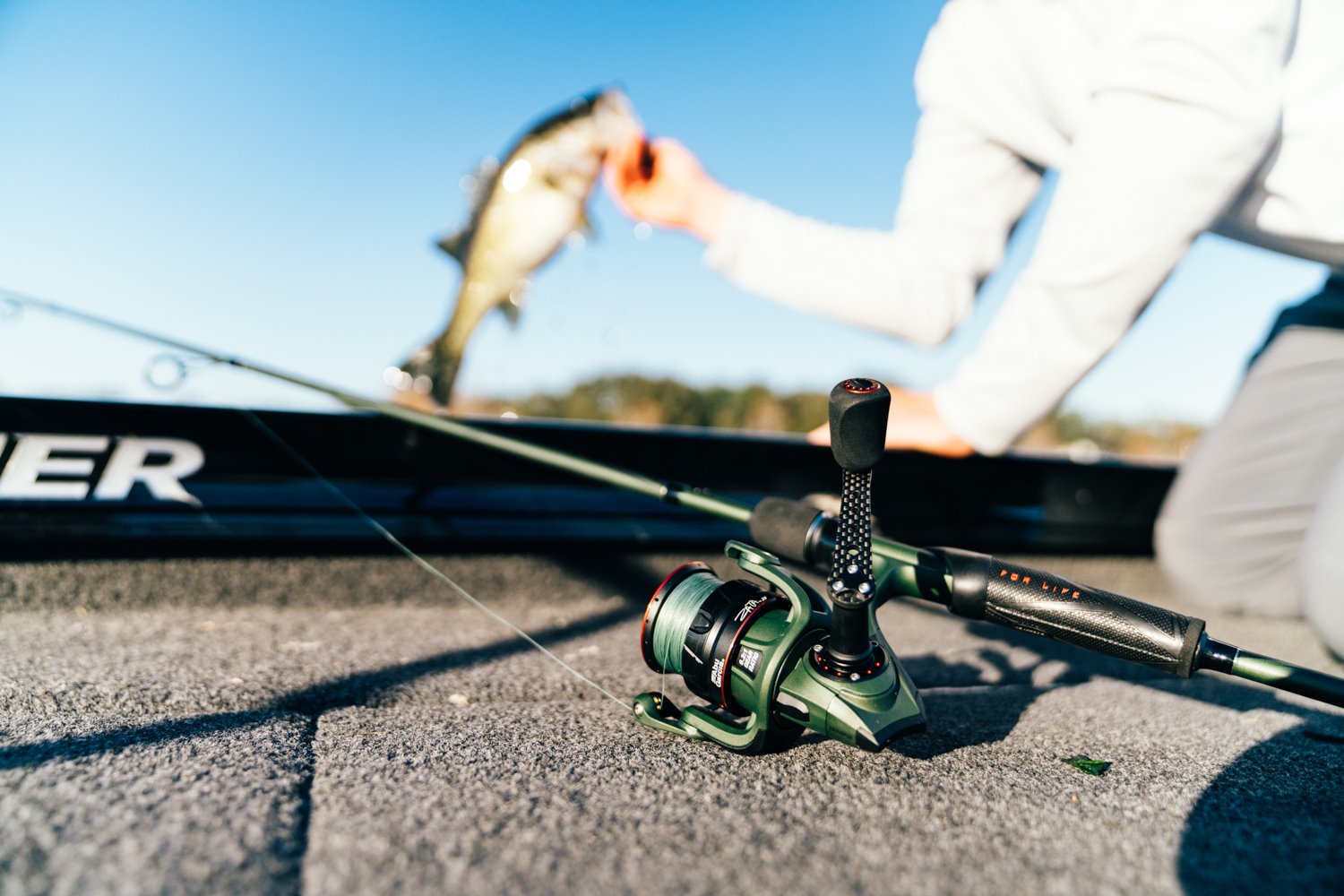 Uncertainty about the weather and water conditions on Lake Guntersville have Abu Garcia pros fishing the 50th Bassmaster Classic looking to lower gear ratios on their reels and slower-action rods in order to stay connected to what could be sluggish, pressured fish.

The 2020 Bassmaster Classic runs March 6-8 on Alabama’s famed Lake Guntersville. The lake is known for producing big bass and the fishery receives its fair share of fishing pressure throughout the year. On the heels of higher-than-normal rainfall totals in the area over the weeks leading up to the Classic, coupled with the varying daily high temperatures in Alabama during late winter, most pros are expecting the water temperatures to be cooler and the water to be dirtier than normal.

“With the weather they are calling for, I expect a lot of dirty water. Not really high water but dirty from all the rain,” said Abu Garcia Pro Hank Cherry. “But that should put the fish up where they need to be in order to catch them.”

If there is any clear water to be had, Cherry hopes to get on a jerk bait bite, throwing it on a 6-10 medium Abu Garcia prototype Winch rod paired with an Abu Garcia STX baitcasting reel, which offers varying gear ratios (6.6:1 to 8.0:1) from which he can select based on bass behavior and water temperature. But given the predicted lake conditions, Cherry expects to spend a lot of time casting a Berkley Squarebull crankbait on a 7-0 medium-heavy Abu Garcia Veracity rod paired with an Abu Garcia STX reel.

“With the Veracity rod lineup, I just prefer the action; it feels good in my hand and I want to feel the same familiar thing whenever I pick up a rod — regardless of what kind of rod it is,” Cherry said. “Every rod, every power, I can pick up whatever rod I want and I know exactly what to expect.”

Crankbaits figure to play a big role in the Classic for John Cox, who recently won an FLW Pro Circuit event on Sam Rayburn using a Berkley Frittside. Coming out of that tournament, Cox said he identified his ultimate crankbait set up, which has sent his confidence with the bait skyrocketing. For this particular crankbait, Cox prefers a 7-6 medium-heavy Abu Garcia Veritas rod paired with an Abu Garcia EXD (5.4:1) reel.

“The Veritas rod can make the farthest casts I’ve ever made. The parabolic bend of the rod loads up just right and absolutely launches the bait, even the smaller Frittside crankbait,” said Cox, who said he expects to throw the 3/4-ounce Berkley Warpig if it’s really cold. “The farther it gets out there, the more it stays in contact with the bottom and hits all of those contact points all the way back to the boat. And because it stays down better, I can be more efficient and cover more water.”

Fellow Abu Garcia Pro Hunter Shryock will throw both the Berkley lipless crankbait, the Warpig, and the Frittside on the same 7-6 medium-heavy Veritas rod paired with an Abu Garcia EXD reel.

“The Veritas is my favorite cranking rod and it’s going to be major player for me in the Classic,” Shryock said. “I can make long casts and get the most out of the EXD with this rod plus it has more than enough backbone to keep the treble hooks in the fish.”

Abu Garcia pros all agreed the new Revo EXD would play a major role in their presentations during the Classic. The new reel is designed to deliver significant increases to casting distances, allowing pros to keep more distance between themselves and the fish. In addition to reducing the chances of spooking fish, which always plays in a role in the Bassmaster Classic, anglers throwing baits like crankbaits can cover more water per cast, with those longer casts leading the bait to spend more time at depths where it’s more likely to induce strikes.

Abu Garcia Pro Shane Lehew said he will definitely be skewing to lower gear ratios on his reels in order to slow down in what he predicts will be cool water. Like Cherry, Cox and Shryock, Lehew will also be relying heavily on the Frittside and Warpig. Lehew said he is hoping for some sunshine during the tournament, which should find some bass moving up towards spawning coves, typically a flat area with some grass or even rock.

“If the water is cold like I expect it to be, you need a rod that allows a fish to get the bait in its mouth a little better,” said Lehew, who prefers the 7-6 medium-heavy Abu Garcia Veracity rod for covering lots of water with large crankbaits like the Warpig. “Guntersville has a lot of grass and with this rod I can make long casts and efficiently cover more water. The Veracity just has the right bend to throw heavier or lighter baits plus it fights fish extremely well. The rod loads towards the bottom and has a softer tip with enough backbone to get fish out of the grass.”

Like his fellow Abu Garcia Pros, Mike Huff said he plans to use crankbaits like the Berkley Squarebull on a Veracity rod. His reel selections will vary from the low-geared Abu Garcia Winch to a slightly faster Abu Garcia STX (6.4:1). But Huff is also prepared to deploy soft plastics on the bass in Lake Guntersville.

“I’m thinking Berkley’s PowerBait MaxScent The General, rigged weightless, in black blue fleck will be great for getting through the grass and targeting pressured fish,” Huff said. “I’ll use a 7-0 medium Abu Garcia Fantasista rod paired with a Revo Rocket spinning reel spooled with braid for the mainline and a fluorocarbon leader.”

For more information about the Abu Garcia rods and reels being used in the Bassmaster Classic, go to abugarcia.com.