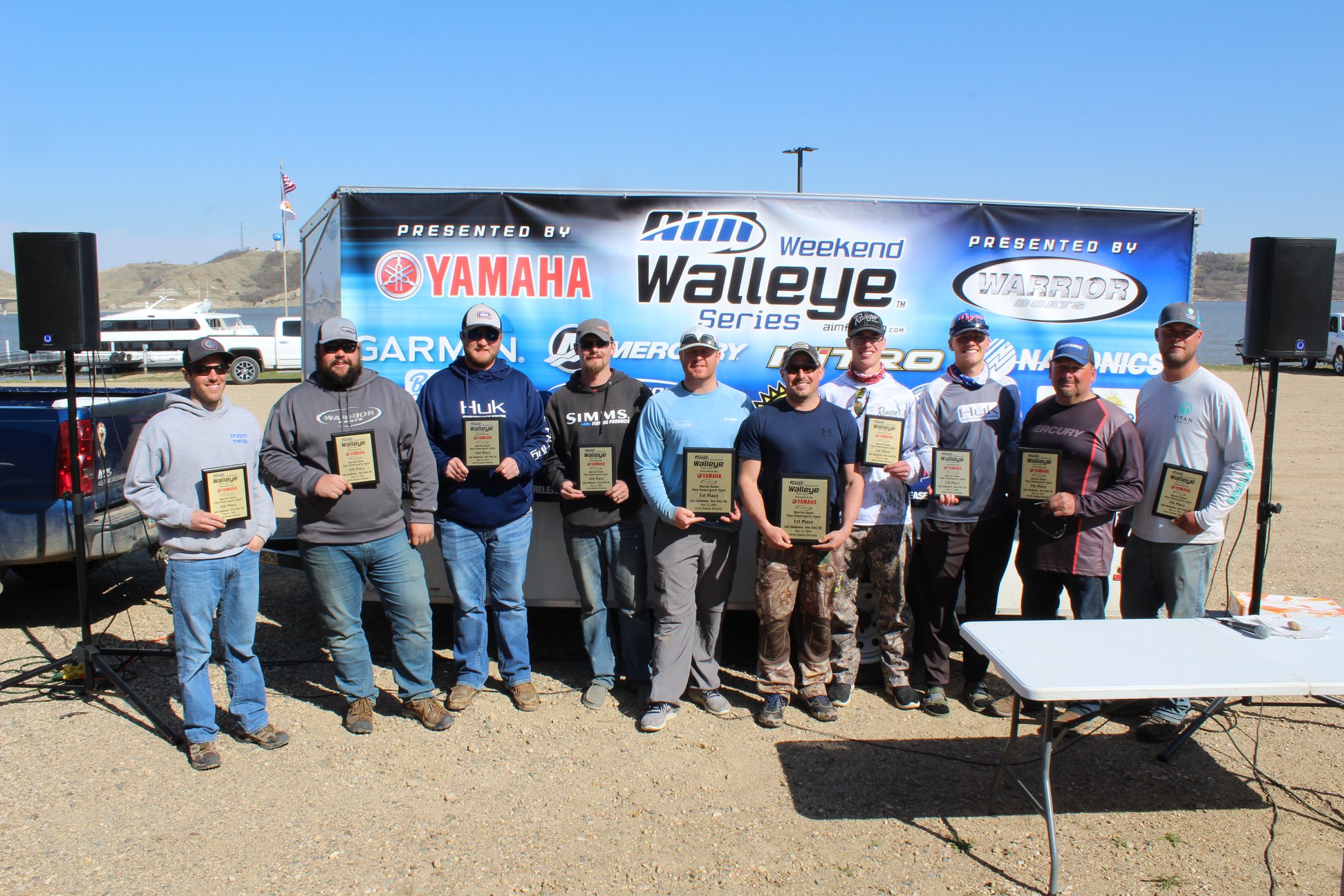 You can’t do better than win your first time out, and in this year’s AIM Weekend Walleye Series Warrior Boats/Pure Powersports Open, first-time AWWS entrants swept the top three positions to net a grand total of $7,600 for a day on the water. 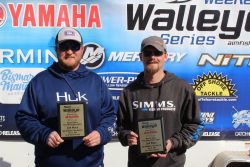 “This is exactly why we do this at AIM,” said Denny Fox, AIM National Tournament Director. “Anyone can win. The fact that the top three were first-time entrants in an AIM tournament is absolutely fantastic. AIM is all about having fun on the water. It’s an inexpensive way to let everyday anglers compete basically against themselves, and possibly bring home some money at the same time. We have a lot of fun putting this on, and I know the anglers do too.”

Not only did winners Grant Miller, from Dickinson, and partner Tyson Decker, from Bismarck, win the first AIM tourney they ever entered; it was Miller’s first win in any tournament. Their massive weight of 38.85 pounds netted them $4,000, and with their biggest fish, a great chance to pick up a new Navionics chip as well on Big Fish Thursday.

The pair ran west, as was predicted, in their 225 Mercury Pro XS-powered boat about 25 or so miles to do it, using the simplest method there is to catch fish: a jig, and a minnow. 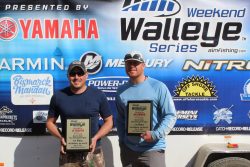 “It went about as well as it could have,” Miller said, using a phrase that could be the definition of a truism. First time out, a first-time win. Yup, we agree.

Miller said he decided to enter an AIM tournament this year after watching what AIM’s unique Catch-Record-Release™ format was all about for a season or two, and then took the plunge this season.

“I absolutely love the format. It’s great for the fishery. I know a couple of buddies who have done AIM and we figured we might have a shot at cashing a check, and with that said we pulled the trigger.  I’m glad we did this year, and we’re planning to be in all four now.”

He said that before getting on the water, they were nervous about doing the C-R-R procedure correctly, but once they did it once, so to speak, not a problem. “As long as you get that nose to touch on the board, it’s pretty simple. I love seeing those 24- to 29-inch fish go back in the water. There’s no reason to keep them.

“Lake Sak is kinda my home water, so I do fish it quite a bit. We ran west, not as far as a lot of boats did, about 20 or 25 miles. We had some spots we pre-fished on Thursday and Friday, and on Saturday, we fished another tournament and couldn’t get to them because of conditions.”

Sunday, however, dawned just about glass calm, allowing them and other boats to get where they needed to go.

“We probably caught 15 or 20 fish but we caught four of our scorable fish before 10, and I popped that 29-1/4 between 1 and 2 p.m. We got back to the boat ramp early. We were so paranoid, we wanted to get in. We thought we had a good chance, but I was a little nervous that we didn’t have enough.

“At that point, a 22-1/4 was our smallest fish and my partner and I were deciding what to do. We ended up running back to a different spot. In an hour we hadn’t caught a scorable fish. We were pitching, and nothing, nothing, and I brought it back and the big one ended up hitting it vertical in 6 to 8 feet of water. With 32 pounds before that, we didn’t know if that would be enough. But that fish (weighed in at 10.45 pounds) bumped us up from 32 to almost 39, and we felt comfortable enough to go in early.”

Almost 40 pounds for five fish is generally a great bag, but Miller said he wanted to be sure. It was. “There were three spots we hit that had some amazing fish. It’s a tribute to that fishery. It’s second to none. If this wasn’t my best day on the water it was dang close.”

He said there was no particular mystery about what kind of minnows they used. “They were whatever we got in New Town. All our fish came in shallower than 10 feet. We did pitch up shallow. I’d say a handful came there. The rest were either vertical under the boat, and even on our dead stick.”

One thing he missed in the excitement of catching that big hawg, however, is a photo, Miller said. Not a problem, Grant. Luckily, it’s on your photo card. Another plus for AIM’s C-R-R format. We’ll be sure to get it to you.

In second place, and another first-timer to fish AIM, were Lucas Bruns and Andrew Keller, both of Minot, scoring 27.25 pounds of fish, and $2,000.

And to show you anyone can win this thing, they did it in a 17-1/2-foot tiller boat powered by a Yamaha 90. They ended up leaving the launch at 4 Bears Casino & Lodge and traveling 28 miles each way, about an hour west.

“This was our first AIM tournament and I loved it. It’s so nice to see the big fish get let go. It’s a great concept.” Bruns said that he’s hoping to do at least two more North Dakota AIM events.

“We were pitching jigs into the shallows, and also caught one of their fish on a dead rod with a jig on it. They spent most of their time on one point of scoria rock (look that one up if you don’t know).

“My fiance’s family has a place near there and I know the fish were biting there and we’d pre-fished at that spot,” Bruns said. “Lake Sak is pretty focused on the ledges in the upper part. I think we landed nine fish and had eight on the card.

“We didn’t hammer’em, but just had the right bites. We started with a 20-1/2-incher, then an 18, and had a dry spell, then caught like a 26, and our last fish was a 22, and they call came off that same point. They kinda came in waves so they were definitely traveling. There were more fish there in pre-fishing than on the day of the tournament. It just so happened these were the right ones.”

Because it was so great to have the top three places taken by newbies, we also connected with the third-place team of Kade Lynch, Bismarck, and Tanner Ouelette, from Dickinson. They finished with 25.73 pounds, good for $1,600.

And, adopting the contrarian view, they burned about five gallons of gas the entire day because they went south of the bridge instead of north, Lynch said. And if they’d a boated a few of the big fish they lost, he said, they might of taken it. Their biggest fish was 27-1/4 inches.

They tried AIM because their friends who fish the series encouraged them, so they decided, why not? “I have a bunch of buddies and some of my dad’s buddies fish it. I’ve always been interested in fishing a tournament and I love fishing that area this time of year, so we said, why not roll the dice,” Lynch said.

He also said that AIM’s C-R-R format played a big part in their decision to enter, which has turned into a commitment to do all four North Dakota tournaments this season. “We entered this one to basically judge whether to do the whole circuit. We’ll now do the rest of the tournaments and shoot for the state and hopefully national championship.

“I do like the conservation part of it. The fish still can swim and see another day,” he said. “We did lose a lot of fish where we were, plus we had no one fishing near us the entire day.

Listen up, qualifiers for this month’s Warrior Boats National Championship Shootout: third-place finisher Lynch also provided some info for you.

“The river’s come up about three to four feet and that will make things more challenging. Lake Sakakawea is up about eight feet over normal,” so the flow at Garrison Dam and how well teams deal with that flow may tell the name of that tune.

Next up, tune those cranks and corner that bait, Wisconsin teams, because Green Bay off Marinette is waiting for you this Sunday, May 19. We’ll have a preview for you later this week.

For updates Sunday and every tournament day via Garmin Fish & Hunt, go to our Facebook page, and for information on all AIM tournaments and how to register for all AIM events, including the next three in North Dakota, go to our website.