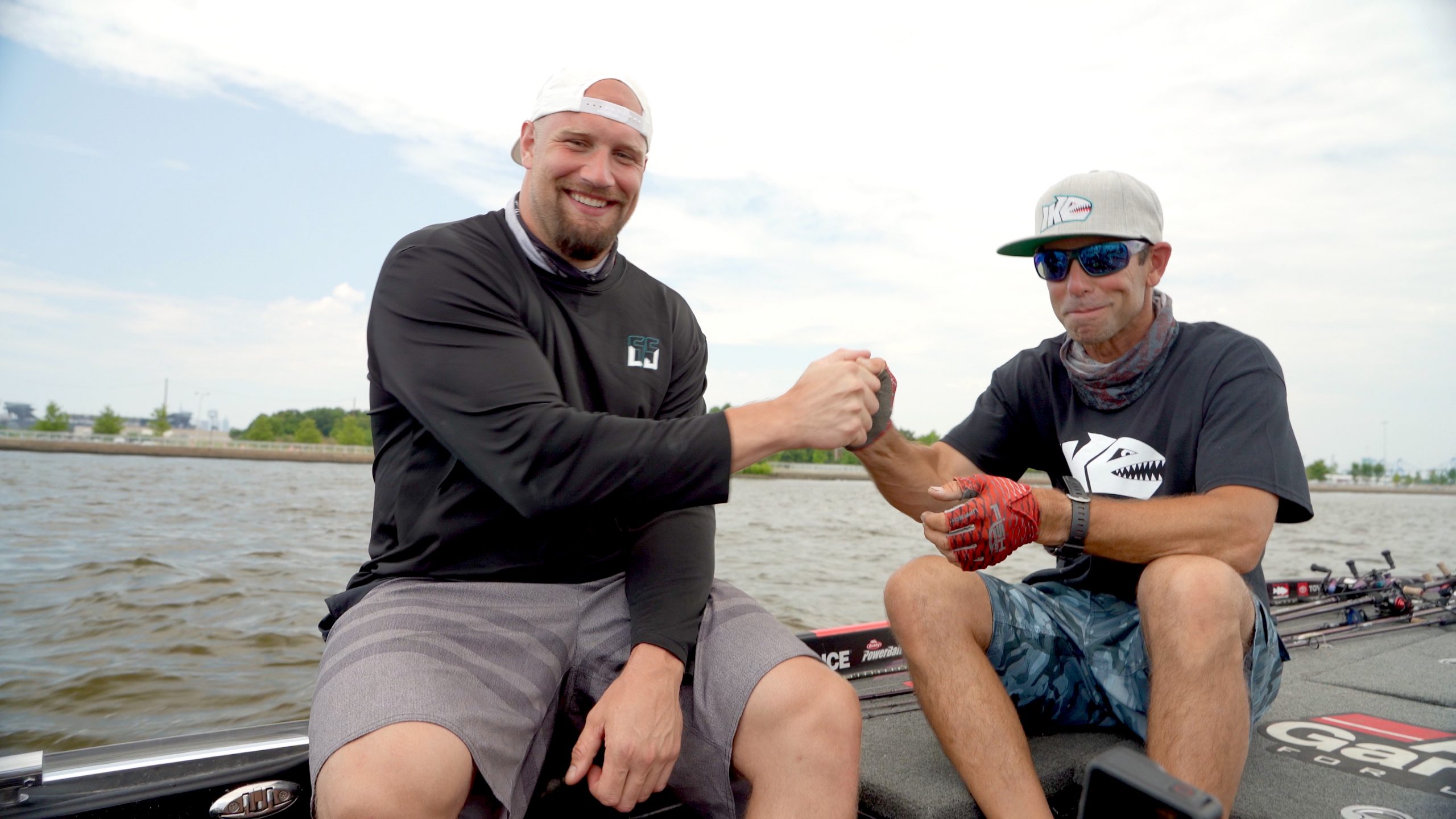 Have you ever wondered what it would be like to train like an NFL Super Bowl Champion or drive at crazy high speeds in a NASCAR race?  Mike Iaconelli is going to take you along for the ride as he steps into those worlds and then swaps places with athletes and celebrities and brings them into his world as a professional bass fisherman. This new six-part series MY WORLD WITH MIKE IACONELLI, premieres Monday, August 30th at 9/8c on CBS Sports Network.

Each episode follows award-winning professional bass fisherman and TV personality Mike “Ike” Iaconelli (@mike_Iaconelli) on his adventures into the lives of other athletes and then fishes a species or weight limit challenge with those same athletes in Mike’s world of fishing. Competitive juices are flowing as these athletes take each other on in this action-packed entertaining series. 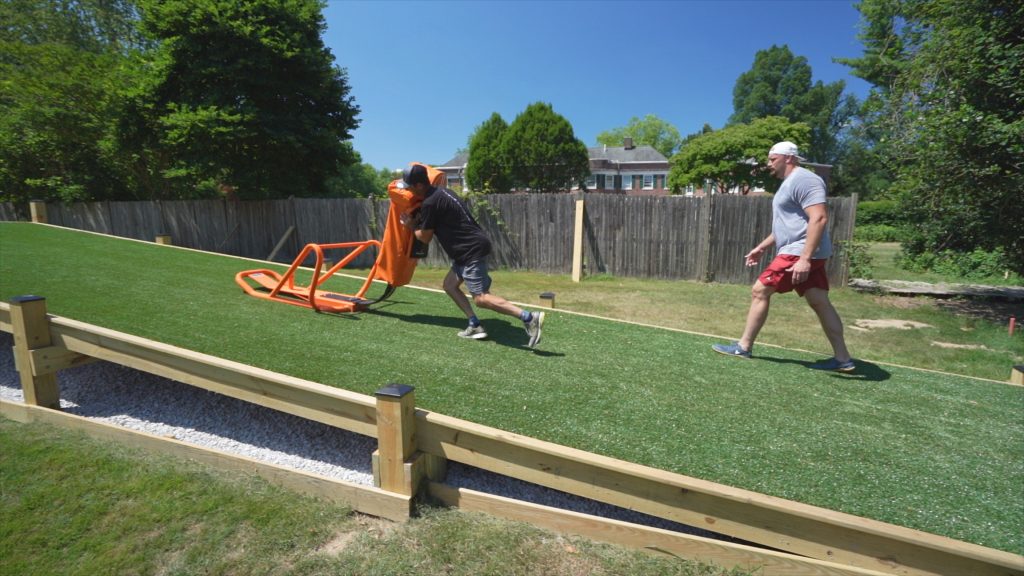 During each episode, Iaconelli takes viewers along with him as he gets a first-hand look at what it’s like to train and compete in the extremely physical world of professional football, bull riding, MMA fighting and more. An entertaining look at the rigor, the passion and the sheer grit it takes to succeed at the top levels of any sport. Iaconelli finds himself beat up and muddy in some cases but lives to see another day as he takes each of these athletes into his world on the water. With various fishing challenges in place in freshwater and saltwater situations, the athletes learn what it takes to be one of the most accomplished anglers in the world.

“I’m excited to partner with CBS Sports Network and this team of amazing professional athletes from so many different sports!” says Iaconelli. “Each one of them brings a passion and unique skill set to their sport just like I bring to the sport of fishing! We’re all fierce competitors, but can they fish? Can I hold my own in their sport? MY WORLD WITH MIKE IACONELLI is really special and I hope everyone loves it as much as I do!”

Mike Iaconelli, an icon in the world of professional bass fishing, is a South Philadelphia native who now lives in New Jersey. He’s had a passion for fishing since childhood and has been competing in fishing tournaments since high school. Iaconelli has won, or come close to winning, almost every major award in tournament bass fishing, most notably the 2003 Bassmaster Classic and 2006 Angler of the Year awards.

MY WORLD WITH MIKE IACONELLI episodes include:

Mike Iaconelli heads to the ‘Bro Barn’ for a rigorous training session with offensive tackle Lane Johnson of the 2018 NFL Super Bowl Champion team, the Philadelphia Eagles. The day is filled with a grueling pre-season workout with Lane and his NFL training partners and fellow players. Will Ike make it through the day with all his body parts intact enough to challenge Lane to a day two fishing encounter where they fish a ‘Philly Philly Philly with a Bonus’? This was a challenge to catch a largemouth, striped bass and channel catfish with the bonus snakehead from the waters of the Delaware River…will they get it done?

Truex, the 2017 NASCAR Cup Series Champion and 2021 Darlington Raceway winner, introduces Ike to the basics of NASCAR racing on an old-fashioned go kart track, later graduating to a next level dirt track!  Is this kind of adrenaline rush too much for the thrill seeking Iaconelli? Switching gears from a Go Fast to a Big Bass challenge, the guys head to Maryland’s Upper Chesapeake Bay as Truex tries his hand in a real fish head challenge. Because Truex is not a newcomer to the sport of bass fishing, these two have a real test in a two 5-pound fish Big Bass Challenge. Who crosses the finish line first?

With Hurricane Elsa fast approaching off the Jersey shore, Kyle Troup, the 2021 Pro Bowling Players Championship winner, and Ike switch it up and set out on a saltwater, multi-species challenge in an attempt to beat the storm. The popular two-handed bowler with the big personality and bigger hair is a fishing newby. With a storm approaching, can the two get it done and complete the challenge? Day two is spent in Kyle’s territory, the bowling alley. Can Ike throw the bowling ball like he can cast a line?

UFC fighter Jim Miller, winningest UFC MMA lightweight division fighter trains Ike in his best moves to face off in the octagon. Any bets on who gets choked out? Will Ike remember the moves or run screaming from the fight? With an amazing fishery nearby, the two brave the wild to explore what was once one of Ike’s favorite childhood fishing holes…does it live up to his memory or do they leave empty handed?

Keyshawn Whitehorse, professional bull rider ranked 8th in the PBR world circuit teaches Ike the ropes in a quick training session before mounting a bull at the Cowtown Rodeo in Southern NJ. Does Ike have what it takes to last the eight seconds, or will he be fishing from a seated position the rest of his life? Day two is spent fishing a multi species challenge at a local lake. Does Keyshawn’s trout fishing experience give him a leg up in succeeding at this challenge?

With a break in her golf schedule, Marina Alex, an LPGA tour pro and New Jersey native, pairs up with Mike to see if she can get a fish in the boat as they navigate the waters of the Upper Delaware River. On day two, Marina and Mike head over to Harkers Hollow Golf Club for a Par 3 Challenge. Will he be able to stay on course or will he drift towards the pond?