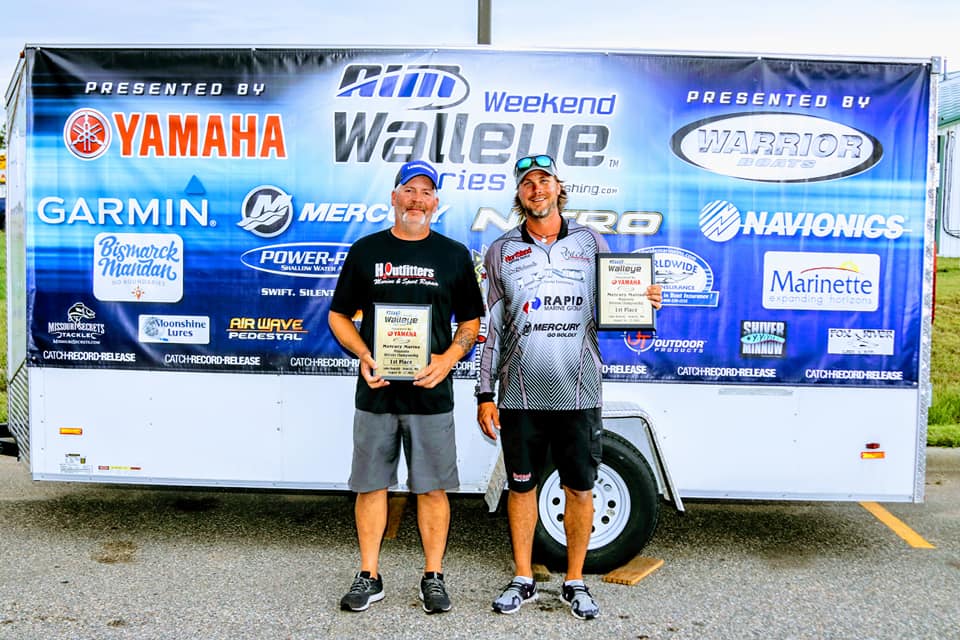 The team of Mitch Hackenmueller and Tim Schwartz, in second after Day One on Lake Bemidji, came in with just a walleye fin over two-thirds of a pound more than the leaders on Day Two to become the AIM Weekend Walleye Series  Mercury Marine 2019 Minnesota state champions, bringing home $8,000 and a spot in next year’s National Championship Shootout.

“We predicted that this would be a real shootout, and it sure was,” said Denny Fox, AIM national tournament director. “Hackenmueller and Schwartz were down by less than a pound with 17.20 pounds on Day One, and they went out and just had fun, and ground it out to bring in 16.30 pounds to take it all on Day Two. The top five from each championship plus the top five in Team Of The Year from Minnesota also qualify for the AIM National Championship. Congrats!”

And in a repeat of so many other stories heard this season, the winners had never put a boat in Lake Bemidji in their lives.

“We went into this saying we’re just going to go fish. We went out and just went fishing, and that’s kinda what helped us,” said Hackenmueller, who, with Schwartz, makes Zimmerman, MN, just northwest of Minneapolis, their hometown.

“They kinda laughed at us. ‘There’s no way you got your winning bag off that spot, they said,’” Hackenmueller said. But they didn’t know they couldn’t, so they did. “It helped not being familiar with the lake. We found lots of spots and caught fish in a lot of areas but they were eater fish, all in that 15- to 18-inch range.”

During pre-fishing in their Mercury 300 Verado-powered boat, however, they cruised the lake and found that spot—THE spot—at the north end that produced the win. No one else was there. No one else apparently knew about the “there again, gone again” bite that did it.

And, they found it just before Thursday’s rules meeting. A half-hour before they had to be off the water. Rigging with creek chubs.

“Rigging nice and slow, putting the minnow right in their face. From .2 to .5 mph, working up and down the breaks on a little reef,” he said. “We came through and got a couple bites and we probably marked only one of the fish we got bit by. They were cruising around a lot. We had minnow bait all the way up to the surface, and they were actually using us as cover. We knew it was a good spot when we started seeing that. They were from the top of the water column down.” And the birds that signaled the spot to them, knew. The minnows did. And the fish did. And, they did, because they were just fishing.

But on Day One, they didn’t even start there. “We had more consistent fish in others. We didn’t think anyone was going to fish up there. There are known spots on this lake and had a lot of boats fishing them over and over. We got to those and the fish and been worked over so hard, we saw one fish get caught in an hour and knew it was time to boogie,” he continued.

“From there we ran to the spot and around 10 a.m. got there and caught two over 18, and there was a little lull and we caught our 25, which is a big fish on this lake. We probably caught 14 or 15, and left by 1:30. We thought, it’s two days and we don’t think anyone knows about this. Let’s go check our other spots, and it was the same, catching smalls,” Hackenmueller said. Two or three fish later, it was time to head in. They sat in second. All they needed was to repeat.

Day Two, head to THE spot. Uh-oh. “We started there and the minnows were gone. The fish were gone, and we’re like ‘oh no!’” he said. But they waited. “We said let’s give it until 10,” he said, the magic hour when things hit on Day one. They chose wisely.

“All of a sudden, here come the birds and the minnows showed up, and my partner did a 23 right away. And we caught two, went another hour, got one, another, got one, and the last fish we recorded was at 1:30, and we didn’t get another. We probably got 10 bites and five dropped it and the five we caught, those fish were on the card.  The fish were coming in and out. We kind of camped there and it tests you mentally to grind it out, but it worked out,” Hackenmueller said.

Coming back, they didn’t know whether someone, like the first-place team, had done better. “We just don’t know. On this lake if you get that one big fish, you’re in the running.

“Once we knew we hit that 16 mark, we were pretty pumped. Not totally celebrating but pretty confident,” he continued. And, just because, like so many other times this year in each of the three states AIM presents tournaments, they just went fishing.

This was the first year they also qualified for the 2020 National Championship Shootout. They missed it two years ago, he said, by something close to a quarter-inch on any fish in any tournament. “We’re pretty excited,” he added.

Day One leaders Chris Biermaier and Chuck Eggert, both from the legendary walleye waters of Merrifield, knew they needed one more decent fish to bring it home, but just couldn’t put it in their Mercury 225-four-stroke-powered 2090 Warrior tiller ride Saturday. They ended up with 32.87 pounds, and at least $4,000 richer. Biermaier said they also may be eligible for Warrior Boats incentive cash.

“On Day One we went run and gun, catching a fish here and there and at the end of the day, we found a pretty decent pod where we decided we would start the next day,” Biermaier said, sticking with rigging medium to large creek chubs both days.

They hit six different spots and caught fish in all but that last spot produced the Day One leader, a 25-3/4-incher. And as the adage goes, don’t leave fish to find fish, they headed back to that spot on Day Two.

“We knew we needed to get the same weight. We assumed if we had another 17 pounds, we could win,” he said. And it seemed like it at first.

“We had five fish in the boat in the first 25 minutes. We did two upgrades, and by 10:45 a.m., we didn’t catch another walleye the rest of the day. We ended up sitting in the same spot for four hours and just couldn’t find one,” he said. “There were four boats fishing the same structure we were fishing. All the boats were catching fish, 20s and 19s. We just needed one more of those and we would have had it.”

That second place finish however means they’re going to the National Championship Shootout for the second straight year. The other top Minnesota championship finishers who also qualified are, in third, and earning $3,000 with 29.01 pounds, Justin Schneider, Forest Lake, MN, and Aaron Sands, Lino Lakes.

The team of hometown Bemidji boy Chaz Dobias, and Ryan Hylla, Moorehead, earned $2,000 for fourth place, with their two-day total of 28.64 pounds, but the sweet got sweeter. They also were crowned the 2019 AIM Minnesota Team Of The Year, and took home that beautiful 9.9 Yamaha four-stroke kicker. More on that in another post.

What a great finish, Minnesota. Now, long-suffering Wisconsin, wakee wakee! You’ve been on the sidelines watching the big shows here in Minnesota and North Dakota since late June. That’s long enough! Time to sharpen those hooks, true up those cranks, fuel up, top off the batteries and come to beautiful Marinette on the shore of northern Green Bay for your 2019 Nitro Boats Wisconsin Championship, Friday and Saturday, Aug. 23 and 24. We’ll be waitin’ for ya!

Stay with us too, later this week, for Big Fish Thursday presented by Navionics, and also this week, the official 2019 Minnesota Team Of The Year announcement. Thanks Minnesota teams and Fan Nation, for a fantastic season.

Follow the upcoming AIM Weekend Walleye Series Wisconsin State Championship via Garmin Fish & Hunt on our Facebook page. Visit our website for information on all AIM tournaments and soon, how to register for any AIM event in 2020. 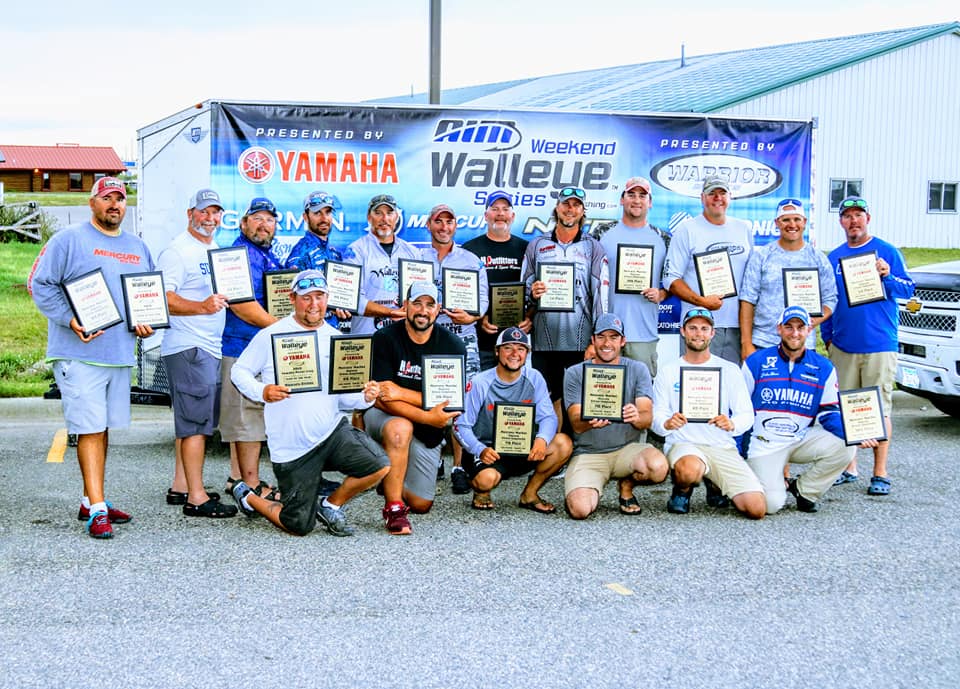