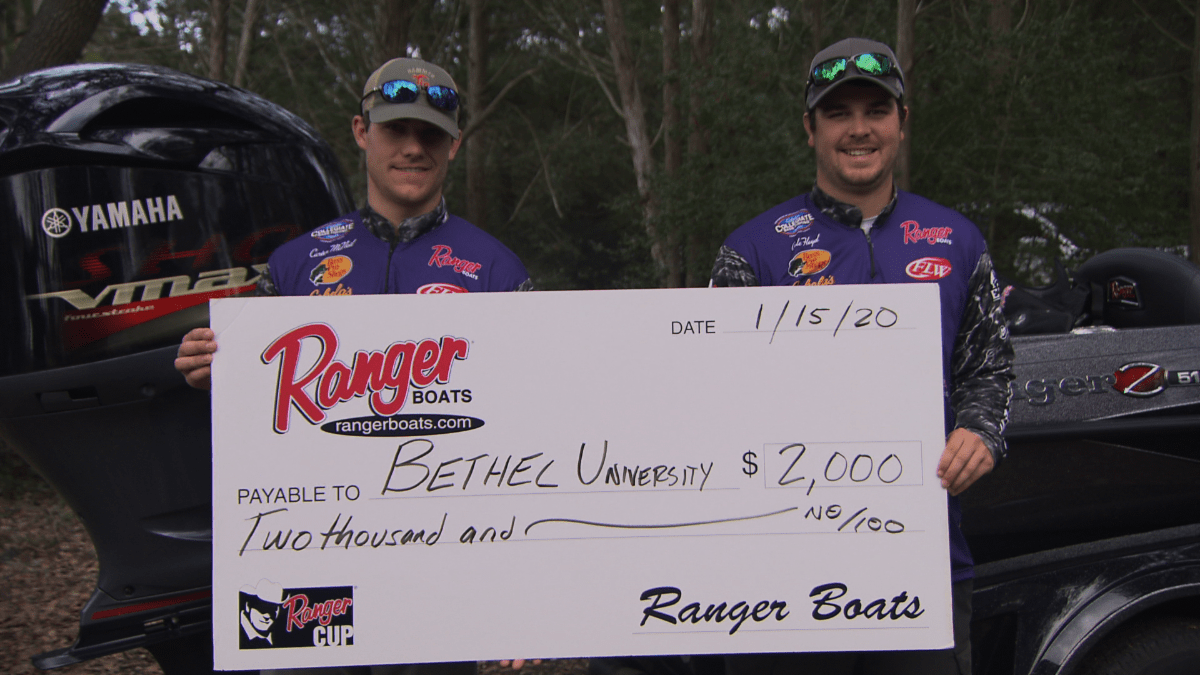 Collegiate anglers take home $2,000 and other prizes in winner-take-all challenge

Cole Floyd and Carter McNeil, collegiate anglers from Bethel University, won the Ranger Cup University Team of the Year Challenge in a winner-take-all, made-for-TV event on Texas’ Fayette County Lake, a power plant lake located in south central Texas. The tournament, which utilized a rules format where all legal fish are weighed and released from the boat, pitted the Bethel University anglers against Adam Puckett and Blake Albertson from Murray State University.

Both teams faced the challenge of landing as many legal fish (over 14 inches) as possible in a single day to take the title. The teams went into the event with only one hour of pre-fishing the night before the start of the competition.  Although the Bethel anglers competed in last year’s event on the same lake, both teams were initially confined to fish certain zones before being cut loose on the whole lake.

“Being there the year before, we were able to locate the better spawning areas,” said Floyd. “It’s a power plant lake so you have real warm water. We caught them while they were moving up to spawn.”

Low water conditions changed up the team’s initial plan of flipping their way to a win. Once they discovered the lake was down two feet, they opted to try for the offshore bite. After receiving the second overall weight update, the anglers stood approximately seven pounds back from Murray State. The team switched tactics and leaned on their experience from last year’s event to find fish they could reliably flip to and gain back the lead.

“The water was two feet lower than last year,” said Floyd. “From our experience last year, we knew there were a couple of stretches of reeds in deeper water. They still had enough water to hold fish. We were able to capitalize on those stretches.”

The team targeted specific stretches of reeds near channel swings for more depth. The change paid off with the anglers boating seven keepers along with a near five-pounder. The Murray State anglers fished a lot of water but struggled to find quality bites late in the day. At the end of the day, the Bethel University anglers weighed in 40 pounds, more than nine pounds ahead of Murray State.

With the win, the team took home won $2,000 as well as bragging rights for their university. For competing in the challenge, both participating teams received a grand-prize package that included travel, lodging and meals.

The made-for-TV fish off will be televised nationally on future episodes of “Americana Outdoors” and the “Cabela’s Collegiate Bass Fishing Series.”

Modeled after Ranger Cup, the most lucrative contingency rewards in the industry, Ranger Cup University is the first program designed exclusively for collegiate anglers and is open to those fishing Bass Pro Shops Collegiate Bass Fishing Series-affiliated competitions in 2020. Signup is free, regardless of which brand of boat the anglers own. To remain qualified in the program, anglers need only adhere to clothing and logo requirements. As part of the Ranger Cup University program, participants will be able to receive specially discounted tournament gear through Gemini Custom Apparel, with no artwork or set-up fees. Through this partnership, Ranger Cup University anglers can purchase fully customized tournament jerseys for as low as $48.

About Ranger Boats
Headquartered in Flippin, Ark., Ranger Boats is the nation’s premier manufacturer of legendary fiberglass and aluminum fishing boats, with acclaimed models and series in the bass, multi-species, fish ‘n play, saltwater, waterfowl utility and pontoon boat segments. Founded in 1968 by Forrest L. Wood, Ranger Boats continues its commitment to building the highest-quality, strongest-performing boats on the water. For more information, go to RangerBoats.com.