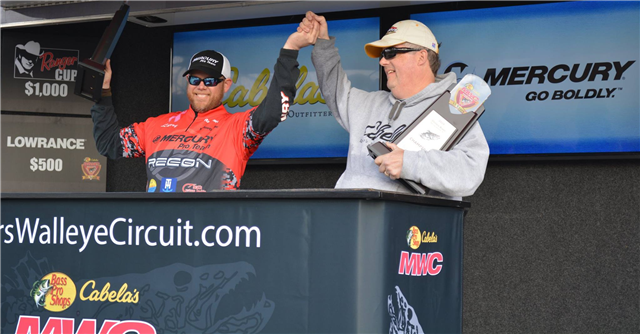 Ponca City, Okla.—March 26, 2019 —The 2019 stop at the Detroit River, launching from Elizabeth Park in Trenton, MI, will provide the MWC anglers with another quality opportunity for big, pre-spawn bites and they won’t have to leave the river to do so.

Presented by Ranger Boats, the “Toughest Walleye Anglers on Planet Earth” will see a small change to the boundary locations for this event. The BPS/Cabela’s MWC fishermen will be kept in the river for the duration of the event. This change is, in large part, due in response from anglers polled over the course of
previous MWC seasons.

Long-time MWC angler and 3-time Detroit River champion Steve Bodinger is excited for the change. “Yeah, I like it, Dan and I won all three of our events from the river, one trolling, one jigging and one doing a mix of both. The river gives everyone the chance to fish just about any way they want, live rigging, trolling or jigging. You can catch in so many places and in so many ways, it really can give you lots of confidence in your plan, confidence is key.”

And finally, this event will serve as our “Last Chance” qualifying events for the 2019 Bass Pro Shops/Cabela’s NTC at Sault Ste Marie, MI. in May 30-June 1, 2019. The top 10 teams at the Detroit River not already qualified can earn a spot in the 2019 NTC!

Daily live weigh-ins at Elizabeth Park, Trenton, MI are free and open to the public beginning at 3:00pm both days April 12, 13.  If you can’t make it in person you can watch the weigh-ins live, online, at masterswalleyecircuit.com or on our Facebook page.

For the area youth, there is something for you immediately after the day-one weigh-in on Friday, we offer a Youth & Family Fishing

Clinic in conjunction with the National Professional Anglers Association (NPAA). The first 50 youth will receive a free rod-and-reel combo!

Under the umbrella of The Walleye Federation (TWF), the Bass Pro Shops and Cabela’s Masters Walleye Circuit is North America’s longest-running and undisputed leader in team walleye tournaments and as an inductee into the freshwater fishing hall of fame, has set the standard for competitive walleye fishing for 35 years and is open to avid walleye anglers from all walks of life. The 2019 schedule includes eight qualifiers in six states, plus the 2020 Bass Pro Shops and Cabela’s MWC World Walleye Championship. Registration is now open for all events, and the registration deadline for the Detroit River tournament is close of business Monday,  April 8. Visit masterswalleyecircuit.com for full details.