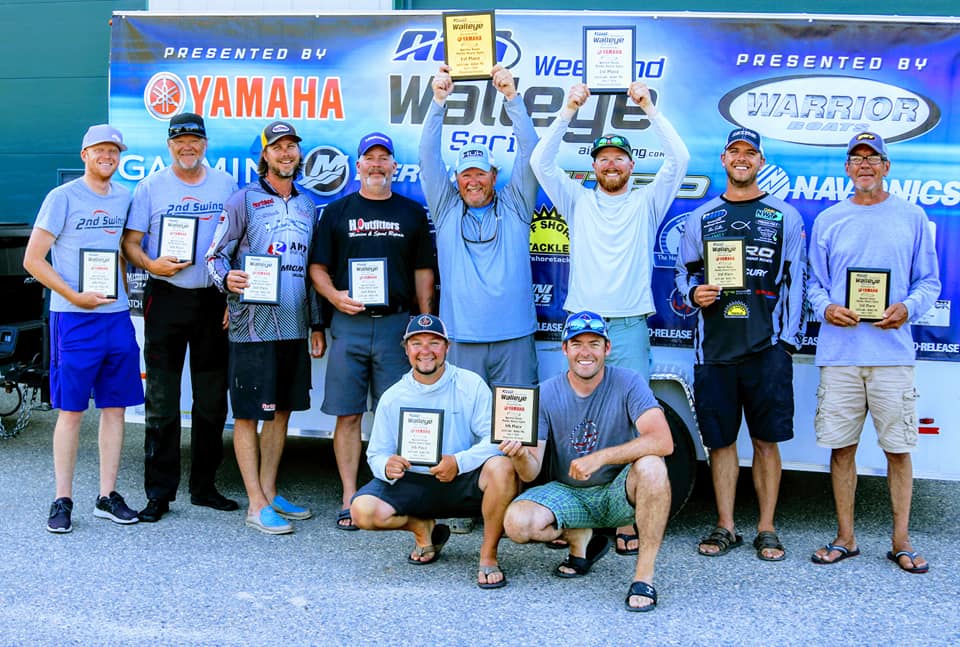 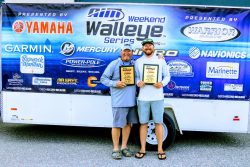 With just over a half-pound separating first and second, the son-father team of Luke and Mark Bollum took home $7,800 and first-place Team Of The Year (TOY) points Sunday (July 7) in the AIM Weekend Walleye Series Warrior Boats/Musky House Marine Open, putting them within striking distance of that honor, with one qualifier left before the Minnesota State Championship.

“Leech gave it up just about everywhere our 99-boat field went,” said Denny Fox, AIM national tournament director. “And the beautiful parts to this were first, three of the top five teams were fathers and sons enjoying a special time on the water, and second, all those hundreds of pounds of fish our teams landed are still swimming, ready for the next anglers to give’em a try, thanks to our Catch-Record-Release™ format.

“Once you try C-R-R, you’re totally hooked,” Fox said. “We’re proud of developing our ground-breaking, resource-saving path to win, because it’s the way more and more tournaments are run, whether you’re after Midwest walleye, or Pacific marlin.”

The Bollum clan, both from St. Peter, MN, used C-R-R in a by-guess-and-by-golly way along a break line in mid-lake to record 38.01 pounds, and because of Leech’s reputation, they actually thought they didn’t have enough poundage to make the cut. At last season’s “Dual Duel” back-to-back AIM qualifiers here, they finished fourth and fifth, and they thought they were looking at the same situation Sunday, until they found one key spot.

“We really didn’t know what was going to happen, if we had won it or not,” Luke said. “There are spots in Walker Bay, that, if they fire, can put out 40 or 45 pounds easily.”

During pre-fishing, they covered the lake, he said, and the bite got tougher as Sunday approached.

“We found them on Wednesday, but what we found were mostly 23- or 24-inch fish that we could go get pretty easily,” Luke said. In other words, not the ones they figured they needed to win on Leech, where, on the right break in say, Walker Bay, one of the lake’s go-to walleye spots, you could win it all in just one pass.

Instead of Walker, however, they headed to the main lake, and a break line that runs down the central part. Trolling spinners and crawlers in a variety of colors, they started building their winning score card.

“We were fortunate enough to find a spot on that spot that held better fish Sunday,” Luke continued. “We had three to get in the morning, and by about 10, they had really shut down. Catching a fish from 10 to 1 p.m. was almost non-existent.”

In fact, when the few boats around them picked up when things got tough, they stayed despite being sorely tempted to head out, too. But sticking it out paid off big time.

“At 1:30 it fired up. We upgraded four fish, including a 27-1/4-incher that literally came at the last minute. That one replaced a 24-incher for us,” and sealed the deal on their win. But even after they pulled the plug and fired up their Mercury 300 Verado for the 10- to 15-mile run back to check in, they had no clue whether they’d done well or not, because of that Walker Bay question mark.

Their win will bump them up in the Minnesota TOY standings from 10th, where they sat before Leech.

“We should be sitting really good.  We have Vermillion in a couple weeks (July 28 at Fortune Bay Casino) and then the championship at Bemidji (Aug. 16-17). We literally didn’t see it coming. We were shooting for around 28 to 30 pounds, and stumbled on these better fish. It was a matter of, when it’s your time, it’s your time,” Luke said.

Only .64 pounds behind with 37.37 pounds, and taking home $2,400 were Mitch Hackenmueller and Tim Schwartz, both of Zimmerman, MN.

Hackenmueller was one of the anglers AIM interviewed during pre-fishing, and he said that with the luck it brought, we could call him anytime. Especially during a bite on Leech that like the rest of the field, grew tougher as pre-fishing progressed.

“We had a good game plan. We were averaging 27- and 28-inch fish every day, but Sunday it shut down,” he said. With the way the lake produces, he also had no clue they’d done so well.

“We walked in there and no way did we think we’d be in the money,” he said.

Hackenmueller and Schwartz went with the averages, staying in Walker Bay, rigging big minnows. And we mean big. “We never left. I think I had nine good spots. With the way Leech is, it’s the deepest part so you get a lot of bigger fish hanging there. They like the deeper water. You can’t get consistency with them on the main lake.  We were using minnows from three inches up, and our 28-1/2 came on a seven-inch creek chub.”

While he had good pre-fishing, Sunday changed all that, he said. “It was a grind. Pre-fishing, I checked a couple spots Saturday and I had around 40 pounds in an hour. Sunday, we honestly caught five fish all day, but they were just the right ones. You weren’t going to catch minnows when you’re running that size minnow.”

One community hole they went to last, he said, could have won it for them. “We went there for one bite and had the fish on and up to the boat, about a 27- to 30-incher, and it came unbuttoned. We knew that was the one we needed to get into that 40-pound range, but it all worked out in the end.”

Hackenmueller said he and Schwartz will have their work cut out on Vermillion, even with second here, for TOY.

“On Mille Lacs, we did terrible, and got stuck out there in the big waves. That put us smack in the middle and we’ll really have to make some ground up. Vermillion’s my wife’s favorite lake and we go there every year for her birthday. The event’s close to that weekend, so hopefully we’re set up,” Hackenmueller said.

AIM’s final North Dakota qualifier of the year takes off on Lake Oahe at Hazelton, southeast of Bismarck, next Sunday, July 14, from the Hazelton Recreation Area. We’ll preview. Minnesota, you’re on vacay until July 28 at Vermillion, while Wisconsin cools its heels until the state championship in Marinette Aug. 23-24. Follow it all via Garmin Fish & Hunt with updates at our Facebook page. Visit our website for information on all AIM tournaments and how to register for all AIM events.