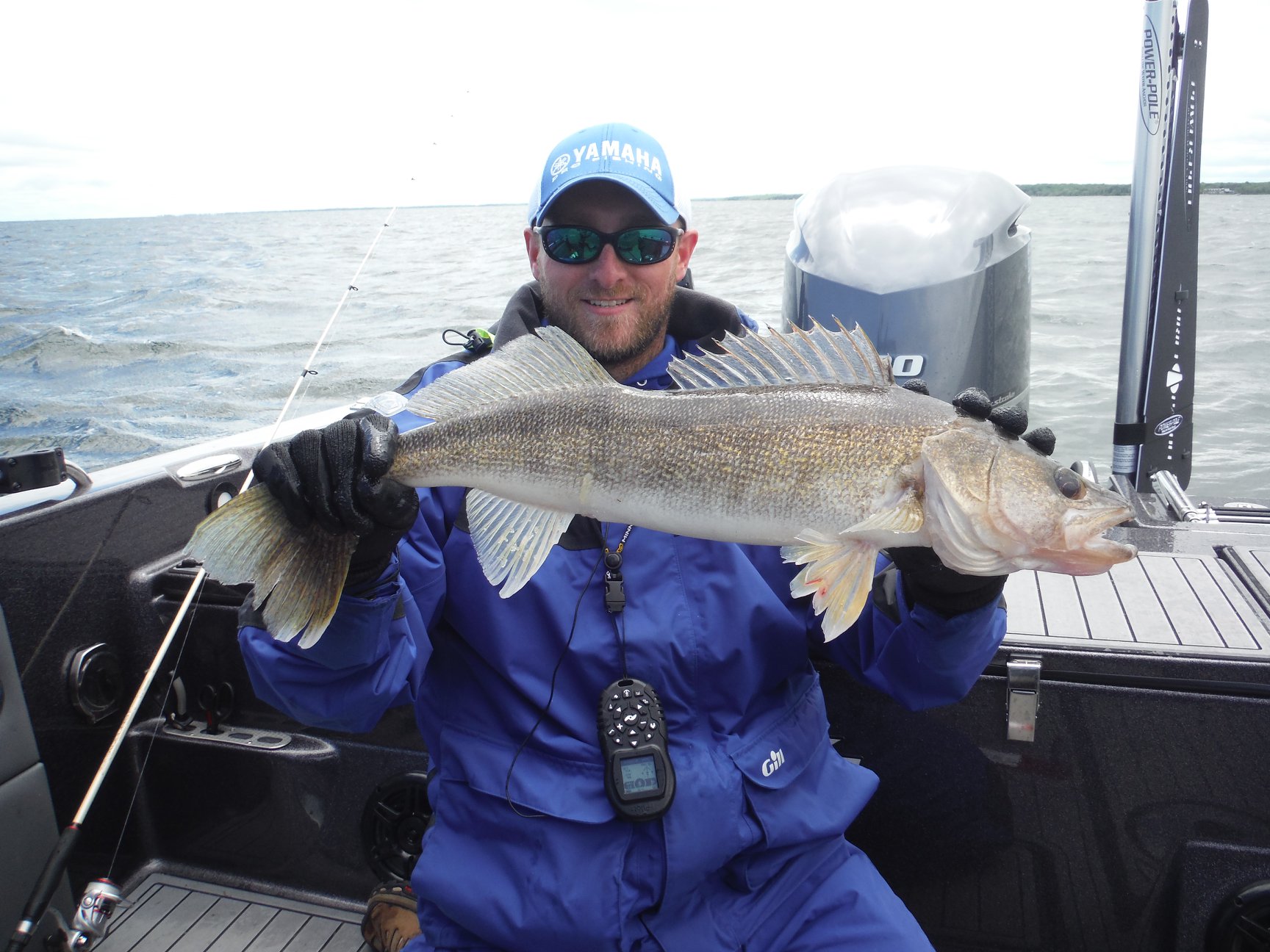 So, how’s it feel to win a new boat/motor/electronics combo worth a cool $55,000 by ¾ of a pound over two days? Ask the son-father team of Jake and Dave Bonsack, who squeaked by the second-place team to win the AIM Weekend Walleye Series/Warrior Boats National Championship Shootout on May 29 and 30 at Minnesota’s Lake Mille Lacs.

“It still hasn’t really sunk in, but it’s pretty incredible. Just an outstanding week of fishing,” son Jake, of Royalton, MN,  said Monday. His father Dave, is from nearby Gibbon.

Their two-day walleye slam brought in 80.09 pounds under AIM’s unique Catch-Record-Release™ format, besting Wisconsin’s Josh Blosser and Luke Johnson, with 79.35 pounds. That earned Team Bonsack the right to hitch up and haul home a new 1898DC Warrior, that 150 Yamaha four-stroke on the transom, and Garmin electronics on the dash.

And as a bonus, because the Bonsacks did it in their 2090 Warrior powered by a 250-hp Mercury Pro XS tiller, they’ll also be cashing a $1,000 Warrior Cash bonus check from Warrior. And, because they got the Navionics “Big Fish” of Day One, a 30.5-inch, 11.94-pounder, they each will receive a new Navionics chip.

Jake Bonsack also credited their team partners Chaz Dobias and Ryan Hylla, who eventually finished eighth, with doing what many do: “breaking down the water” to eliminate spots, and concentrate on four or five. The Bonsacks had five “go-to” spots, and Jake says, “we caught fish on all,” but visited maybe three. But that was enough. Their bait of choice for all: a jig and a shiner minnow pitched into the shallows, about six or seven feet deep. Pretty simple.

“On Day One, we pulled up to our first spot, and it was super windy, so we headed towards Indian Point (on the lake’s southwest side, nearly opposite the launch site, Mac’s Twin Bay Resort), and there were too many boats there,” he said. Bonsack said that the Indian Point area was “so-so” popular before but it might just be a bit more now.

“We headed to spot Number Three, and my dad got a 30.5 incher there. And, that wasn’t even our big fish spot. It was our card-filler spot.

“This time of the year, most of the time I would have said this would have been won on the mud flats, and those fish weren’t there yet. Everybody figured that out pretty quick that they were still post-spawn, near shoreline structure,” he continued. “They were thumpin’ it. On Day One, we probably caught 80 walleyes. It was truly unbelievable.”

They were in third place when Day Two dawned, off the lead by about six-tenths of a pound, and they knew that putting together two days of Warrior boat-winning fish would be tough.

“We were pretty consistent on Day One, and on Day Two, we thought we’d need one more better fish. When you’ve got the caliber of anglers in AIM, I wouldn’t have been surprised that on Day Two, someone would have figured out a crazy bite. The top 15 teams were still in the tournament,” Bonsack said. It was a rough ride again, but they chose their No. 1 spot and popped a 26-1/2 incher, then ran again to Indian Point. With two 27-inchers in an hour, they headed to that “card filler” spot and almost immediately caught successive 26-inchers. They once again used minnows and jigs, but in steeper breaks, used those great MoonShine lures Shiver Minnows.

As they rode back, that anticipation and wondering if someone had come upon a honey hole gnawed at them. It was only at the final moments of virtual awards ceremony that they knew. “We didn’t know it until we knew it,” was the way Bonsack described it.

Second place and two new 10-foot Power-Poles is the team of Josh Blosser and Luke Johnson, both of Lodi, WI. Blosser says he fishes Minnesota events because he likes the lake variety. Since he already uses Power-Poles on his 300-hp Yamaha-powered boat, along with a Power-Pole smart battery charge management system, he knows the quality of the product.

They headed for a sand flat with scattered weeds on the lake’s west side, casting a variety of jigs with plastic minnows, paddle tails, ring worms, you name it. “All our weight on Day One came out of there,” Blosser said. “We had two 28s on the card.”

Day Two arrived, and AIM teams knew a local tournament would be on the water with at least 100 boats. On Day One, Blosser said, many of them checked the spot they were on, so they knew it would get crowded on Day Two. It did. After only three AIM boats, including them, on Day One, the crowd grew to 30 or 40 on Day Two.

So, after nailing three fish there which they did not keep on their card, enter Plan B: They cruised to the lake’s east shore, changing tactics and pitching this time to rocks.

“It started off as a steady bite and we had confidence that we could pull that 40 pounds. Our smallest on the card was 23 from the first spot and the biggest from the second over 27 inches. All our fish from the second spot were over 26, all on plastics,” he said.

“We had about two hours to go and we were expecting to upgrade, but with two hours to try, we couldn’t get it done. We tried hard, though,” he said.

The rest of the top five places each dropped behind the leaders by about two pounds each. In third, Chad Bleeker, of Ellsworth, WI, and Jeremy Stoner, of Plum City, WI, won two eight-foot Power-Poles. They also won the guaranteed Garmin Cash of $500 for being the highest finishing boat with permanently mounted Garmin Electronics on board. Bleeker and Stoner were in first after Day One. What happened? It was a case of ‘you dance with the one that brung you,’ said Stoner.

“Basically, we stuck to the same plan on Day One and Two, pitching jigs with minnows on shallow rocks in the lake’s southeast corner, but we kept on joking that we got MTT’d (Minnesota Tournament Trail).” Meaning, too many boats spoil a good thing.

Our fish weren’t there. We had a full card in the first hour on Day One,” he said.

When boats from the other tournament crowded in, and they began scrambling, moving from the lake’s northwest corner to the east and then southeast side. “We did land a couple of good upgrades, but it wasn’t until the last hour. It was a good move, but we couldn’t get that last bite,” he said.

In Fifth, Michael and Cassidy Denis, of Krakow, WI, came in with 73.52 pounds, good for two Garmin 93SV electronics units.

Yamaha Power Pay program pays the highest placing Yamaha Powered rig that is registered a bonus. This event was schedule to have the largest pay out of the year in the AIM circuit at $2,000. The winner is Mike Klein of Hastings, MN.

Now it’s on to Wisconsin’s first tournaments of the year, a double-header, first, this Saturday, June 6, on the Wolf River and Lake Winnebago leaving from Winneconne, and then this Sunday, June 7, leaving from Menominee Park downstream in Oshkosh.

As we are doing, please follow government guidelines regarding COVID-19, and stay tuned to both our website and our Facebook page for those weekend updates from the water both days!