Brandon Palaniuk Following a Dream That Began 24 Years Ago 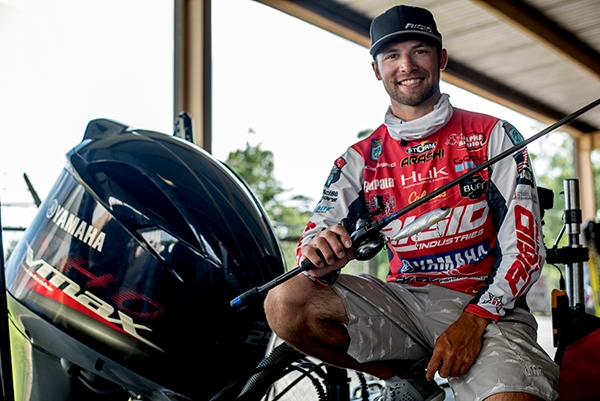 Brandon Palaniuk will never forget his first ride in a bass boat, because part of him was really scared at going so fast on the water. At the same time, another part of him was unbelievably excited for the opportunity. He also remembers that day for another reason. The future Yamaha Pro caught a four-pound bass on a tube lure by a fallen tree, and that’s when he decided he wanted to be a professional fisherman. He was eight years old.

“That’s all it took, one day in the first bass boat I’d ever seen, and then catching that single fish,” remembers Palaniuk. “My mom had started taking me fishing when I was two years old, and from her I learned to love the outdoors, but before that day, I didn’t know there was such a thing as bass tournaments and fulltime professional fishermen.

“After that day of fishing, I started reading everything I could to learn more about the sport and dreaming how I could become part of it. I never really had any doubts about what I wanted to do. I just didn’t know at what point
in my life I’d do it.”

That dream has continued now for more than two decades. The friend with the bass boat took his young protege out more and more, including to local tournaments. Then Palaniuk introduced some of his friends to bass fishing, and within a few years all of them were competing in local events.

“I remember winning my first club tournament,” Palaniuk continues. “The water was really, really cold, and I caught only one fish, but it was a 6 ½-pounder that hit a spinnerbait. The runner-up had caught four bass, but they only weighed 5 ½ pounds. I was about 14 and winning that event gave me more confidence than you can imagine. I was absolutely on top of the world.

“The next step up was the B.A.S.S.® Federation (today, it is the B.A.S.S.® Nation), but the minimum age to compete in their events was 16, so I had to wait two years just to be able to fish them, and that was a long, long wait. Believe me.”

In 2010, when he was 23, Palaniuk won an FLW event as a co-angler, pocketing $20,000, his biggest check by far at the time, and later that same year he won the B.A.S.S.® Federation championship on the Red River. That qualified him to fish in the 2011 Bassmaster Classic®, where he subsequently finished fourth. That, in turn, qualified him for the 2011 Bassmaster® Elite season.

“It sounds like a fairy tale,” he admits, “but I’ve had my share of hard times, too. I remember trying to get back from fishing tournaments and literally running out of money. I would call my mother and then wait at a gas station while she transferred money into my checking account so I could buy gas and keep driving just to get back home. Of course, I slept in my truck at every event to save the money I would have spent on motel rooms.”

“The lesson I tell youngsters who ask me about becoming a bass pro is that you have to keep your dreams in front of you,” emphasizes Palaniuk, now 32 and preparing for his 10th season as a fulltime tournament pro. “You have to remember them every day, and be willing to sacrifice to make them happen. You need to know the dream is not going to happen overnight, that it might take a while, but realize, also, that every day you can make progress toward that goal.

“The worst thing I have seen in my travels is people, not just young people, without any dreams for their future or to better themselves, at all.”

Over his relatively short career, the Yamaha Pro already has three Elite victories, and in 2017 he won the coveted B.A.S.S.® Angler of the Year title. Although he is considered a success by those who know him, Palaniuk has never stopped dreaming.

“Anytime you reach a goal, it comes with a new set of challenges that you have to overcome,” he says. “I’ve had some success in tournament competition, but my record won’t compare to those of some of the very anglers I compete against, so trying to reach their level becomes a brand new dream.

“Fishing-wise, I want to design new lures and develop the techniques needed to use them successfully. I want to spend more time with my family. I want to become a better businessman.

“I still have plenty of new dreams to keep me busy.” Y