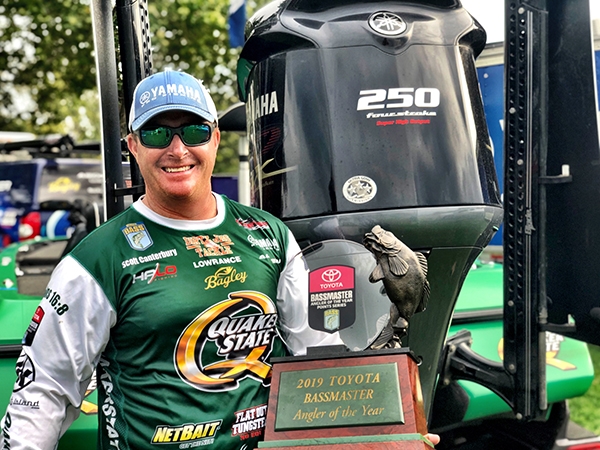 According to Scott Canterbury’s notes, he spent 33 days in competition on 10 different bodies of water during the 2019 Bassmaster® Elite season, but the most important part of his season really lasted just 20 minutes on the second day of fishing on Oklahoma’s Lake Tenkiller.

“I had never been on that lake before,” explains the Yamaha Pro, “but I found some offshore structure where I caught a bass on my first cast there during practice, so I left that spot without making another cast. I planned to start there the next morning when competition began, but when I did go back, I never caught a fish there the entire day.

“Tenkiller was our 9th and final regular season tournament, and I’d come in leading the Bassmaster® Angler of the Year race, but I lost the lead that first day. I was really struggling the second day, too, and with only an hour left for fishing, I had caught just four small bass that weighed less than four pounds. In desperation, I went back to that offshore structure and miraculously several big schools of baitfish had moved in. I started fishing and during the next 20 minutes I culled all four of my small bass and added five more that totaled about nine pounds, and that’s what saved my season.”

There is a little more to the story, of course, the most important being that with those fish, Canterbury qualified to fish the third day. He added 10 more pounds to his total, finishing 19th in the tournament and regaining the points lead in the Angler of the Year race.

Tenkiller was critical because it was the final regular season event, but the Yamaha Pro actually had several similar experiences throughout the season. At Winyah Bay, with just 40 minutes remaining the second day, he ran seven miles to catch a small bass he’d seen earlier on a spawning bed. He made one cast and caught the fish, which qualified him by ounces to fish the third day. He fished well that day and eventually finished second in the event.

Canterbury had still another magic moment in the season’s final event, the Angler of the Year Championship on Michigan’s Lake St. Clair. On the first competition day, he was forced to fish without any front depth finders, and once again he lost his lead in the AOY race. The second day he regained the lead when he weighed in around 22 pounds, but on the third day he was struggling again. At 12:30 he had just two small fish in his livewell.

“I ran to a spot I knew and the bass were there. From 12:40 to 1:20 p.m., I caught a fish between three and four pounds on every cast,” he remembers. “I weighed in more than 19 pounds that day, and won the title. On the ride back to the weigh-in, tears were running down my cheeks.”

The 2019 season was Canterbury’s first on the Bassmaster® Elite circuit but not his first in professional competition. He began fishing FLW® events in February 2008 (he zeroed on his first day of competition in his very first event) and went on to qualify for 10 Forrest Wood Cup® championships. This season in the Elites, he recorded two top 5’s and six top 15 finishes. He missed winning at Winyah Bay by about eight ounces.

“Winning the Bassmaster® Elite Angler of the Year title is probably one goal every fisherman sets for himself at the beginning of the season,” continues the Yamaha Pro. “I know it was for me, and to win the title is a dream come true. I did not actually take the lead in the points race until after the seventh tournament of the season on the St. Lawrence River where I finished 3rd, but I wouldn’t let myself think about it.

“After I finished 11th at Lake Cayuga, our next event, it was hard not to think about it. My close friend and fellow Yamaha Pro Jay Yelas, who had won the AOY title in 2003, told me to keep fishing as hard as I could.

“That’s what I was doing, but I still needed that special 20-minute flurry of action on Tenkiller. It saved the season for me and won the title.” Y