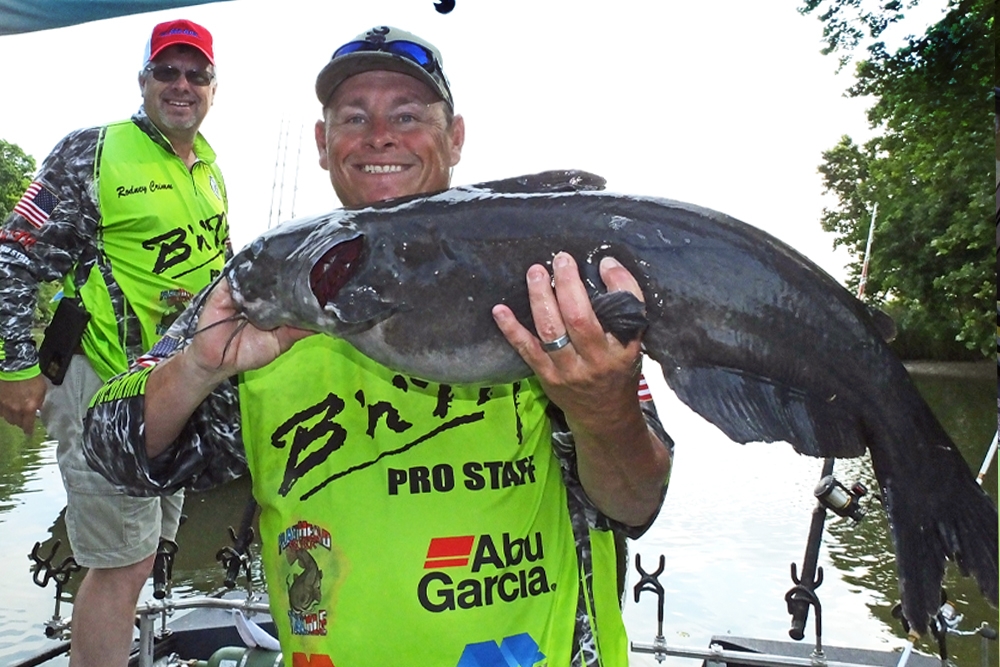 Catfish are still caught during the peak of the spawn, but tactics must change to compensate for the change in catfish behavior during this specific time of the year.

Some anglers even take a few weeks ‘vacation’ from catfishing because the spawn can dramatically change fishing success using standard tactics. It’s the singular time of the year when finding and consuming food sources isn’t the number-one priority for Mr. Whiskers.

Professional fishermen and highly successful partners in catfishing tournaments, Michael Haney and Rodney Crimm from Mississippi adapt their fishing strategies during the spawn to take advantage of the opportunities that now exist. 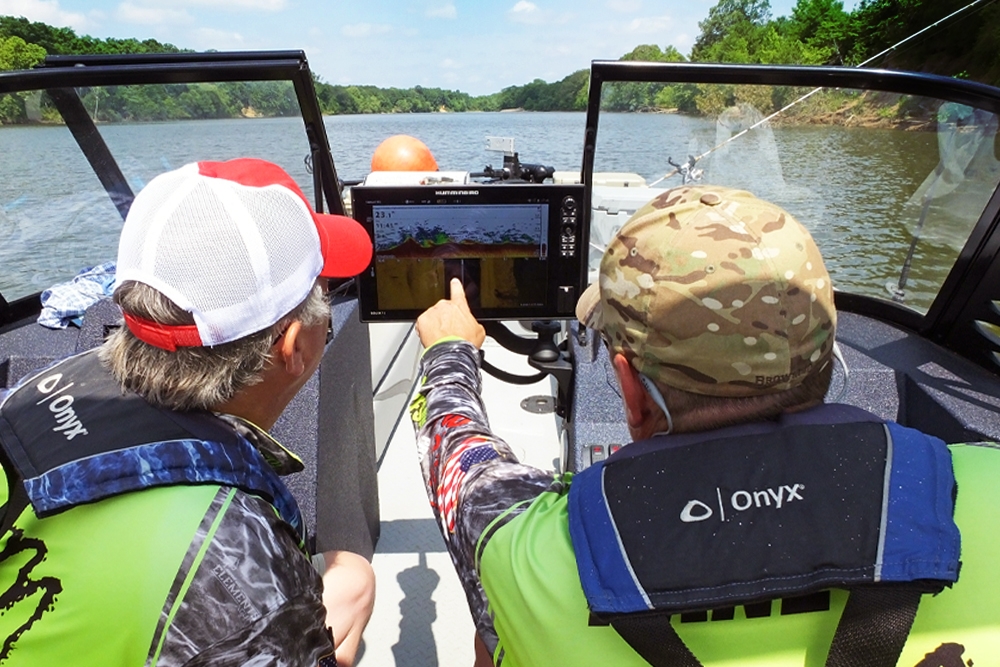 “Catfish are caught during the spawn but fish-catching does become more complex, especially for trophy-sized catfish,” Haney said. “But that doesn’t mean they can’t be caught.”

Crimm said that one problem is a function of perspective in terms of catch rate.

“We’d all love to catch lots of big catfish on every trip,” Crimm said. “But prior to the spawn, we do enjoy sensational fishing success. This awesome pre-spawn action makes the transition to the spawn slowdown seem more pronounced because fishing the spawn is tougher.”

“Transitioning from pre-spawn to spawn doesn’t occur overnight but it does evolve rapidly,” continued Crimm.  If a fisherman is off the water for several days the decreased feeding activity can seem dramatic.”

Haney (flatheadfevertackle.com) said one strategy they employ is fishing areas with both blue and flathead catfish available. This provides two species with different habitat and spawning requirements to target.

To maximize fishing options during the spawn Haney and Crimm select a fishery with both species so when one specie begins spawning, they can target the other in the productive, late-pre-spawn mode.

“We enjoy fishing the Alabama River in the Elmore Country area of Alabama for example, because this excellent fishery has blues and flatheads in a roughly 50-50 percent ratio,” explained Haney. “When blues get into spawning mode, we’ll focus on flatheads and put quality fish in the boat. As the flatheads get locked into the spawn, we look for blues again because they’re approaching post-spawn phase and ready to eat.”

Crimm said catfish don’t completely stop eating during the spawn. Also, not all catfish of the same species spawn at exactly the same time. Some individual fish begin spawning early and others a good bit later, so overlap exists. 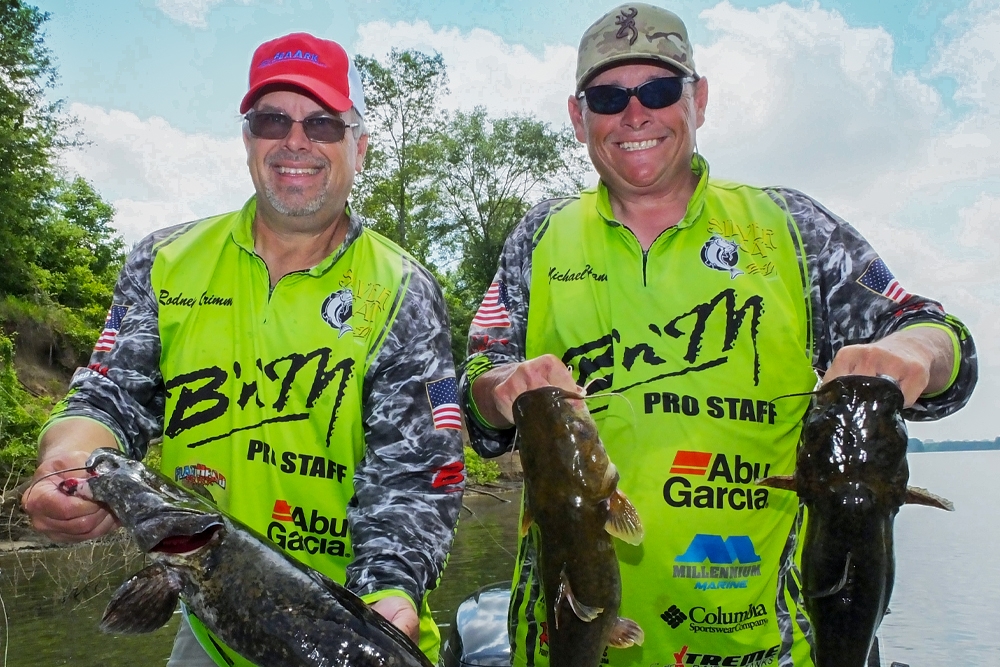 “Another factor that’s more prominent in lakes than in rivers is the water temperature from one portion of a large lake can be noticeably different than another area,” he said. “If the water temperature warms earlier in the upper end and spawning begins, we can often find biting catfish in the lower end. When fish in the lower end reach peak spawning mode, the upper end may be near post-spawn.”

Crimm said that in lakes, because of the sun angle and the relatively still water, the north shore of the lake can warm quicker versus the south shore because of more direct sunlight. They employ that information to their advantage when selecting the targeted species.

Haney said patience is certainly a virtue during the spawn and they’ll typically be willing to fish an area longer than normal to give a big cat an opportunity to bite.

“During non-spawning fishing, we’ll set up and give a place 15-to-30 minutes, but during the spawn, we’re a bit more patient,” he said.

“We rely on electronics throughout the year but even more during the spawn,” Haney said. “If we’re fishing a woody area targeting a big flathead, we’ll want to see images of fish snugged up against cover. If we’re drifting open water on a lake, or if fishing the middle of a river targeting blues, we’re also looking for areas with fish present.”

He said that different targets require different methods of fishing. When looking for a big flathead in a tangle of trees they’ll fish from an anchored position to pinpoint bait presentation to that specific catfish target.

“Catfish stick to a precise location during the spawn,” Haney said. “Fewer feeding fish may be present than normal so we want to target the specific fish we mark.”

“During the spawn, we’ll rely on drift fishing, or dragging, more than we normally would,” he said. “Dragging allows us to cover more water in an effective manner. We’ll use multiple planer boats to spread our baits to cover a larger area because we’re trying to get baits in front of as many fish as possible. We’re searching for fish in an eating mode during the spawn.”

Another tactic Haney and Crimm employ is fishing at night, particularly during the spawn. Crimm said the nocturnal hours favor vigorous feeding activity during warm weather and the spawning period is no exception.

“We’ll begin an hour before dark and do some scouting with the electronics to make a plan and then fish through the night,” Crimm said.

Bait is the final ingredient to their beating the spawn game-plan. Their go-to bait is often big chunks of skipjack if they’re targeting big catfish, as they certainly would during a tournament. 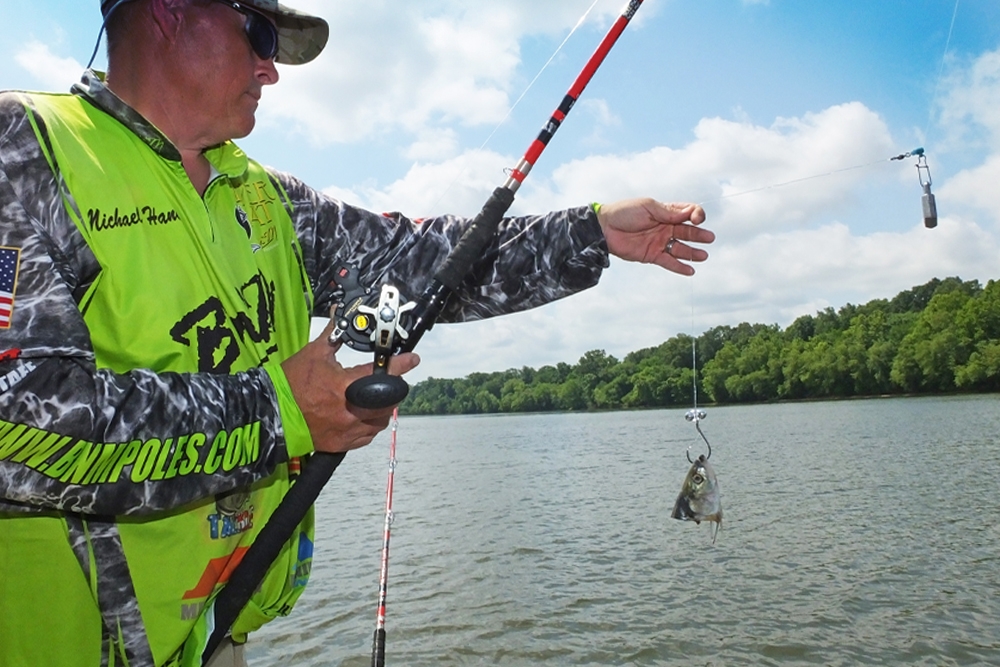 “Skipjack is hard to beat for big catfish during the spawn,” reflected Haney. “We’ll sometimes use a whole skipjack with a 2-hook rig to target a big fish, plus we’ll use large chunks of cut skipjack. This attracts big catfish via dispersing lots of scent while eliminating bites from smaller fish.”

But if the goal is to catch a number of fish, they’ll change the bait strategy.

“Live shad or bluegill are excellent baits for quality fish and smaller fish, depending on bait size,” he said. “During the spawn small chunks of cut bream or shad are excellent. Nightcrawlers, or catalpa worms if you can find them, typically produce plenty of action on smaller fish throughout the spawn.”

“The key to the best bait during the spawn is to determine the size of fish you’re targeting and plan your bait use accordingly,” he suggested.

Patience, perseverance, and planning are key components of the successful spawn-fishing strategy for Haney and Crimm. Catfish are caught in quality sizes and respectable numbers during the spawn by anglers who adapt their strategies to beat the catfish spawn.