Choosing the Rod that Leads You 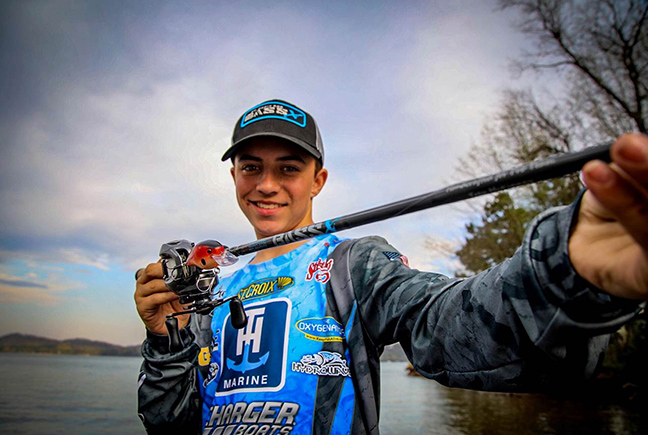 Park Falls, WI (March 26, 2019) – Most thirteen-year-old kids don’t have a clue what they want to do with their lives. Trey McKinney, however, isn’t like most kids.

As the first angler to ever win both the BASS and FLW Junior Championships in the same year, McKinney’s success comes as a direct result of dedication and hard work pursuing a lifelong goal to become a professional bass angler. And, together with his faith, family, and an ever-important coach, McKinney is on track to fulfill his dream rather quickly.

Not surprisingly, the story of Trey McKinney, tournament bass fisherman, begins early. At only eight years old, the youngster competed in his first organized event – a church tournament at Lake of Egypt, Illinois. Within a few years, it became apparent that Trey had a passion for competition, and he quickly advanced with the help of a close family member.

Trevor McKinney – Trey’s cousin – is a highly acclaimed college angler with McKendree University, and was a former Bassmaster High School All American. Trey credits Trevor with introducing him to tournament fishing, as well as helping to refine key techniques, like jig fishing. In time, Trey and Trevor competed together in a few local events, further adding to the young angler’s schooling.

However, as the older Trevor quickly developed his own path, it was apparent a close mentor would be needed for Trey to continue to progress. Here, the McKinney’s again relied on their faith to find guidance.

“We prayed for someone to come along and help Trey, because, as parents, we really didn’t now anything about tournament fishing” commented Trey’s mom, Kim.

The McKinney’s needs were met in the form of Trey’s new coach and mentor, Rick Cheatham. A former tournament angler himself, Cheatham was monumental in developing Trey’s skills on the water, and taking Trey to tournaments. “He’s been a true blessing to Trey” Kim added.

The Mckinneys’ dedication to Trey’s tournament focus is apparent through much of his upbringing, perhaps, most notably, his alternative schooling. “We home school Trey, and it’s really helped” commented Kim.

Trey agreed, stating “I couldn’t tournament fish like this if I wasn’t home schooled. I miss too many days.” The McKinney’s confirm that Trey’s advanced level of fishing often places great demands on his education. But, mom puts her foot down occasionally. “Believe me, he has things (schooling) he has to accomplish before he can fish” Kim chimed in.

Trey McKinney’s dedication to his goal includes a growing presence in the fishing industry, and the establishment of a support base. Included in his list of valued relationships is one with St. Croix Rods, the famous family-owned business from Park Falls, Wisconsin.

McKinney’s introduction to St. Croix was almost by accident. “My coach had a few St. Croix rods, and I tried them and quickly developed a favorite.”

“The product is amazing. Everything that St. Croix does is to make anglers like me, better on the water.  Since the first day I picked up a St. Croix, they’ve immediately helped me catch more fish.”​

Once McKinney was introduced to the St. Croix staff, his commitment grew even more. “It’s a family-based company, and they treat you like family. That’s a really big deal for me.”

Through continued dialog and passion for the brand, McKinney earned a place on the St. Croix youth program, and now exclusively relies on St. Croix Rods to compete across the country. Not surprisingly, McKinney’s favorite models today include the Mojo and Bass X Series, rods developed and priced with young anglers in mind.

While McKinney continues to find value in surrounding himself with the best equipment, his overall approach continues to stress the importance of developing lasting relationships in fishing. His point of view may seem mature for his age, but it’s rooted in a family history of conservative values, and one that will likely be an asset later. Far from caught up in the spotlight, McKinney’s plan meshes with the St. Croix business model.

“St. Croix has shown they believe in me.” he commented. “And I appreciate that as much as