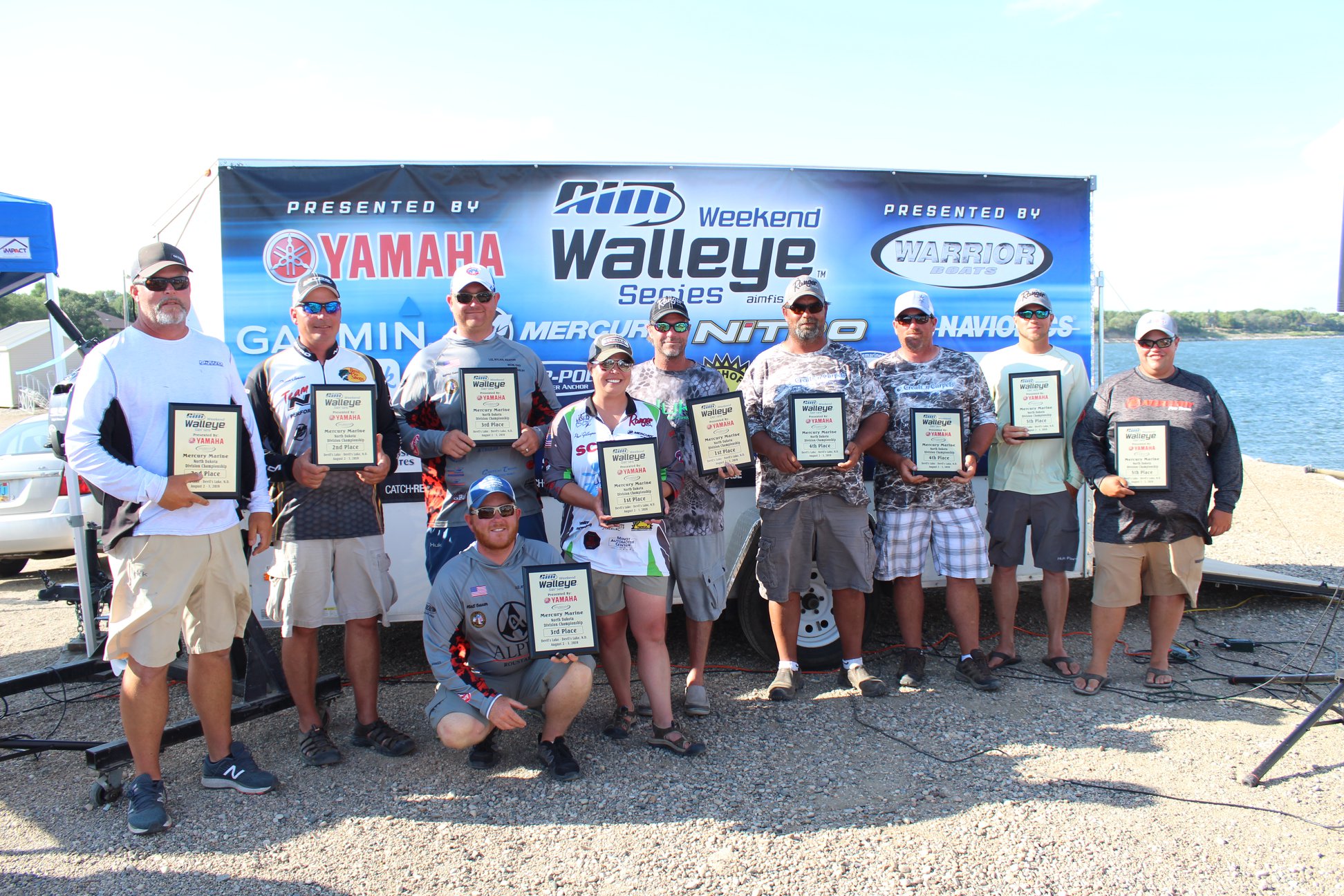 Sometimes in tournament fishing, you make the luck, and sometimes the luck comes to you in a seeming insignificant move that makes all the difference.  In an amazing reversal of fortune, Pearl and Scott Gillespie came back after a seven-pound Day One to take $4,500 for first place with 41.68 pounds and earn a berth in the next AWWS National Championship Shootout, during the AIM Weekend Walleye Series Yamaha Motor Corp. 2019 North Dakota state championship.

“It just shows, never, ever give up when it comes to walleye, and especially when it comes to fishing the championship,” said Denny Fox, AIM national tournament director. “Devils really showed its sides for our teams who competed for two days from Woodland Resort. 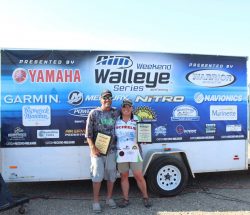 “And, wait, there’s more. The top five from each championship plus the top five in team of the year for each state go the Shootout. So congrats all qualifiers.”

In a second mini-reversal, the second place team of Travis Clemens of Velva, and Roger Schumann of Minot, hung on during Day Two to take $2,500 and a berth in next year’s championship, landing 38.59 pounds over two days, after the fish they were on in Day One disappeared on Day Two. Here are their stories:

Pearl Gillespie said she and Scott, of Minot, struggled all week during pre-fishing in their Mercury 350 Verado-powered boat.

“It was a tough bite, and we didn’t nail down a specific spot,” she said. “Come Day One we caught a bunch of little ones.” Their total Day One tally: 7.41 pounds. Not enough to win even a neighborhood tournament. That’s where that “never give up” attitude rises to the occasion. And, it did on Day Two for them.  How? They just decided to have fun.

“After Day One, we were disappointed, and we decided to just go out and go fishing. We ended up on a spot in East Devils Lake holding a lot of fish, and it was a pretty wild ride for about 90 minutes,” Gillespie said.

“The first was about a 26-incher, then we went for a long time without a fish, and then found this very small area that was big fish one after another. I don’t think we caught anything at the spot under 24. We had a couple of 24s on the card that we didn’t end up using. So that was a nice position to be in.

They claimed first using crank baits on lead core. She’s not ready to say what or colors, since they’ve got a second big tournament coming up on Devils soon, but she did say they were standard colors.

“The first day, everything came on crawlers and in hindsight that was a mistake. As soon as we put down cranks, we started catching bigger fish. They were looking for them and it was a reaction bite. The water is very stained, and that makes it a challenge to keep your baits clean and ready to eat,” she continued.

The win also moved them to third place in Team Of The Year standings. “We were in the middle of the pack all season and the beginning of this looked like we were going to be on the lower end, so it was a pretty surreal kind of thing, when it’s 1:20 p.m., when we realized we just put ourselves back in contention, and that’s such a fun feeling,” she added.

Team Gillespie will be there as well next season, to defend the title and take big time advantage of AIM’s Catch-Record-Release® format.

“It’s a fun format. We’ve never done a C-R-R type tournament and heard a lot of buzz about AIM. It’s not a lot of travel, and that makes it affordable, and getting to put the fish back is amazing,” she added.

While they were almost trying to fight off the fish, on Day Two the eventual second-place team of Clemens and Schumann were in the same area, trying to find’em in their Nitro ZV 21 powered by another 350 Verado.

“We fished in East Devils Lake and caught most of our fish casting Jigging Raps. The first day we caught about 80, and the fish were just gone the second,” Clemens said. “We went to casting cranks (Rapala Shad Raps and Original Floating Rapalas) along weed beds and got three fish. We could see them following our lures, but got bit a handful of times. We spent six hours catching three fish in shallow water, about four to five feet. Our go-to spot was deep but we needed some wind and it picked up about 1:30 or so, and we went shallow and that’s what helped us out pitching cranks.”

“I’m a veteran on Devils and occasionally you catch fish like that but occasionally they run deep. We kind of went back there on a whim and the water was 78 degrees. I didn’t expect them to be that way but sometimes that’s the way it works. When there’s food the fish will stay there,” he said.

“Our biggest fish was a 27 on a Jigging Rap, ripping’em as hard as you can. Really erratic. I bet we lost $300 worth of Jigging Raps the first day on deep trees. On this lake, once you sink one into a tree there is no way getting them out,” he said. Well, maybe one or two. He’ll be looking into a lure retrieval system.

In third place were the brothers Bauer, Robert and Matt, from Williston and Bismarck, respectively. They led the pack after Day One, and finished a fish nose behind Clemens and Schumann, with 38.41 pounds, good for $1,500.

Fourth went to Justin Krieger and Rick Ellingson, both of Williston, earning $1,250 with 32.28 pounds. In fifth and earning $600 for 31.03 pounds, were Kyle Clifton, Minnewaukan, and James Rusten, Devils Lake.

Congratulations to all teams who competed this year, even if you did not cash a check. You gained valuable information on lakes you perhaps never fished. You are leading the way in practicing AIM’s Catch-Record-Release® format, ensuring that the big spawning-age fish you released will still be there to produce coming generations of fish for all to enjoy, whether you catch and keep, or catch and release.

We’ll see you next year, when North Dakota’s rivers and lakes again warm, and the fish get hungry. Join in, and be on the leading edge of the C-R-R wave in your state. AIM IS the way of the future.

Follow it all via Garmin Fish & Hunt on our Facebook page. Visit our website for information on all AIM tournaments and how to register for any AIM event.