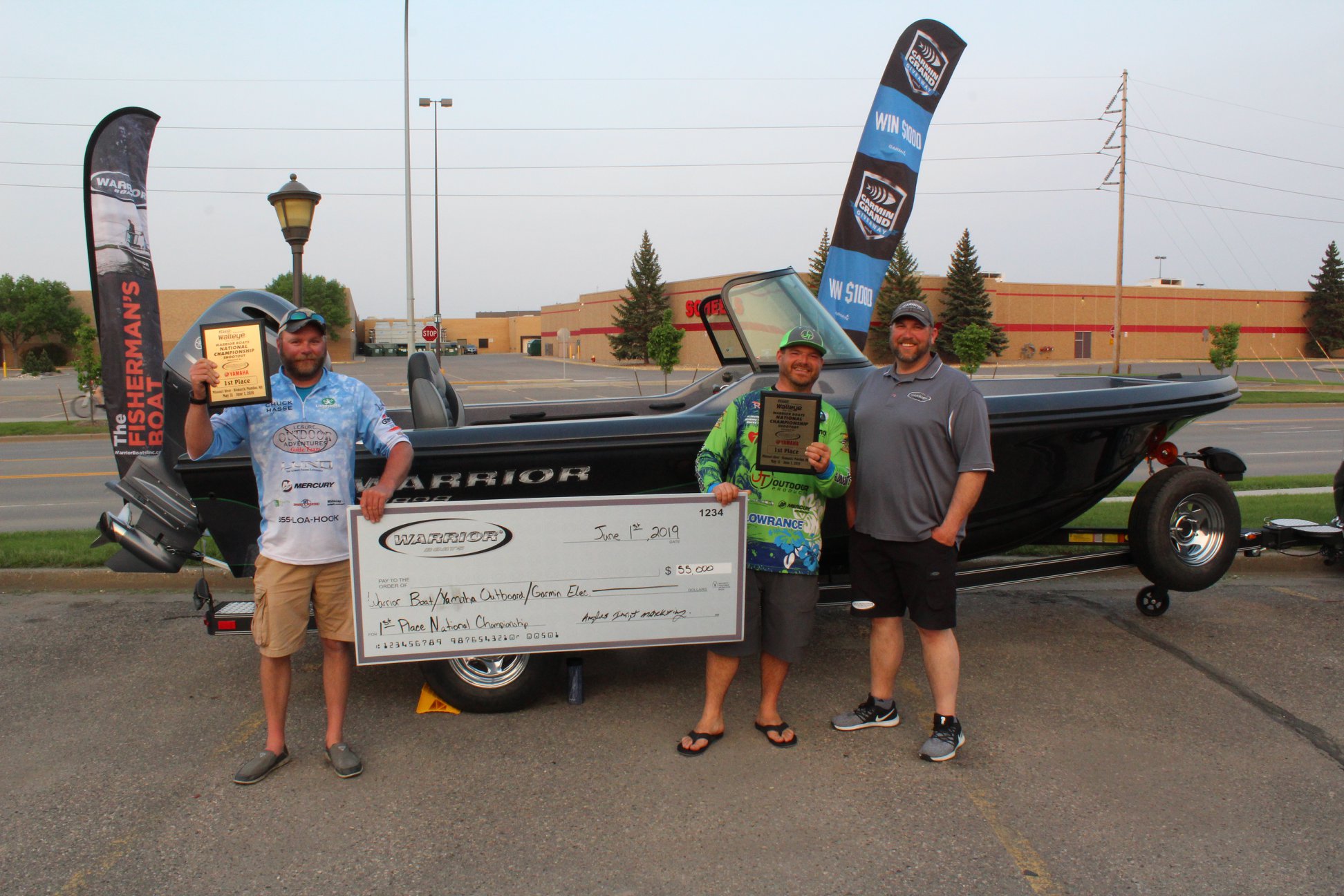 We said it in the preview of the AIM Weekend Walleye Series/Warrior Boats National Championship Shootout. And many times before. The team that keeps its cool, is consistent, and sticks to its plan, even if it’s unfamiliar with the Missouri River, might just take this thing. Don’t count’em out, we said. Well, guess what?

The Minnesota team of Randy Topper and Chuck Hasse, who had only been on a scouting trip once on the Missouri at Bismarck-Mandan, won the AIM shootout, driving away with a new Warrior 1989DC powered by a 150 Yamaha four-stroke, with two Garmin electronics units. That little package is worth $58,000-plus. Not a bad payday.

“What an event, and what a finish,” said AIM National Tournament Director Denny Fox. “They won it by 1.1 pounds, and two other Minnesota teams finished second and fourth.”

Now: how they did it and where.

And the key to Topper and Hasse’s winning is simple: planning, more planning, confidence in their planning, and sticking with their plan, when psyching out themselves over their plan and potentially abandoning it was oh so tempting.

Topper, from Cohasset, Minnesota, and Hasse, from nearby Walker, had visited the Missouri only once, on a scouting mission.

When they arrived the Saturday before they could start pre-fishing, having already poured over river maps through the winter to find the potential winning spots to fish in more than 200 miles of water.  Their first job was finding bait, since they didn’t know where they could.

Then the results of that planning began to unfold.

“Our biggest struggle was looking at past tournaments. We saw some pretty decent weights and we were dissecting the water like crazy, but couldn’t put up the same weights. But we began getting consistent at putting up about a 20-inch average,” he added. “I found one potential spot way up river and ended up getting stuck on sandbars, and time just caught up with us, so we made the decision that we were going to go with where we found that average.”

Day One saw them shoot 23 miles south in their Mercury 250 Pro XS tiller-powered boat, concentrating on a creek bay and a mud flat they’d found.

They started pulling crank baits on planer boards and found that there were so many other fish there, including giant buffalo fish, that they slowed presentation by changing to crawlers. “We had to slow everything down. We were getting a few bites and catching everything under the sun, but not walleyes. We’d seen it before,” Topper continued.

When they switched to crawler harnesses their luck changed. “As soon as we started running crawlers around 11 a.m., we got our lucky fish, a 24-1/2-incher. We continued to upgrade and ended up with our Day One weight. We did get a couple on cranks but nothing nice. All of our weight came on crawler harnesses,” he said.

Coming back, he said, proved pretty interesting. The wind picked up, making it more difficult to see crud in the water, including a log about four inches in diameter and eight feet long that they luckily chopped in half, without damaging anything on their motor.

Back on shore, he said, they looked at the other teams, and began to get an inkling they were at least in the running. “There were not a lot of happy faces and puffy chests and we thought we might have a chance. Our goal was 15 pounds a day unless we got a lucky fish. Whether it was going to be enough to be on top we had no clue. We felt good about the way we fished, but we just didn’t know how it would add up,” Topper said. “Well lo and behold, we were in the top 10.”

In fact, they were in second place.

“That’s when we started to realize we had a program that could possibly win this. We needed to be consistent and get that 20-inch average. All we could do was go out and fish the best we could and that’s what we went into Day Two with,” he said.

And that meant going right back to the same spot, that creek mouth, where warmer water meant new spring vegetation, minnows, and the toothy ‘eye predators that were also tracking them.

“We had a long discussion about that spot, whether we should go upriver where we got stuck on the sandbar. We weren’t the only ones on the spot and we felt we had the colors dialed in, starting with one in the morning and changing colors throughout the day. Even if there were fewer fish on Day Two, we’d do our best. It was really tough but we knew if we were consistent and kept our heads together…”

They stuck with the program, and went south. Two feeding periods did it, he said. “We hit one window in the morning from 8 to about 8:30. We got most of our bag there, and then hit one more nice window about a half-hour before we had to leave, and we upgraded two more times. The biggest fish the second day was a 20-3/4-inch fish,” Topper said.

At the end of Day Two, he said, he and Hasse looked at each other. “We said we fished our best and knew we’d reached our goal, and knew that was all we could do without that luck factor of getting a big fish. It is what it is at that point and no matter how it played out we were proud of the way we fished.

“The only thing we were worried about is that system has some big fish in it and there was a chance that someone hooked that 30-incher, and we couldn’t reach them. That’s always in the back of your mind that a walleye lottery winner could have gotten that big fish,” Topper said. It was still anybody’s tournament to win, or lose, the standings were so tight.

But back on shore, rumors began flying. They stayed calm, trying not to jinx themselves. Then came the call from Denny Fox, letting them know that they were in the top five. But, they still had no clue how they finished until the Showdown Shootout, with those top five playing musical chairs as their weights were announced.

“I watched the other guys walking up and kinda had a read that they knew they didn’t have it, but we had trained ourselves not to expect something until the end,” Topper said. “But it didn’t become a reality until Denny announced it, and to tell you the truth, it still hasn’t totally set in.

“We worked our tails off and were proud of what we did. We started the homework the day after the Minnesota championship last year at Lake of the Woods. We measured our distances and noted every known spot and distance to them.”

How will they celebrate? More like, when? No way, not yet, pal. No time.

They’ve got another tournament to get ready for, this weekend’s AIM Warrior Boats/Hwy 3 Marine open, a Minnesota qualifier on Mille Lacs, the first qualifier this season for the next state championship, there, the door-opener for a spot in next year’s National Championship Shootout, and a shot at yet another Warrior Boat/Yamaha outboard/Garmin electronics package.

Now, here’s Dylan Maki, of Cohasset, and Joe Bricko, of Farmington, MN, who followed in the winner’s wake. They settled on a 33-minute boat ride south in their Yamaha 250 V-Max SHO-powered craft.

Says Bricko, the real reason they did so well, was their equipment and technique. Disclaimer here: Bricko is owner/president of JToutdoor Products, an AIM sponsor, so of course the team would be using his rods. And one in particular, a prototype of one you’ll probably see at its website soon.

“They were critical to our success,” Bricko said. “It was a nine-foot, two-inch, telescoping rod. We just placed it in the rod holder and let it do the work so we could hold our second rod in hands. Because it had a real soft buggy whip-like tip, the fish would essentially pin themselves. They wouldn’t detect any backbone until it was too late. We held our seven-foot, three-inch Mag Light rods in our hands. You had to let the rod load for a while before you set the hook or you’d miss it.”

Sunday, Minnesota’s first qualifier of the season on Mille Lacs. We’ll have an update later this week on what to expect. North Dakota, you’re on deck, with the next qualifier June 16, just up the road a piece from Bismarck, at the Totten Trail Recreation Area on Lake Audubon, part of the Lake Sakakawea complex, but separated from the main lake by U.S. 83.

And at the end of that rainbow will be spot at the next AIM National Championship Shootout, at a location to be announced. There is still plenty of time to register, and get on board this train.