Cranks Get’er Done On Oahe for First, Second Place AIM Teams To Wrap Up NoDak Qualifier Series; Devils Is Next 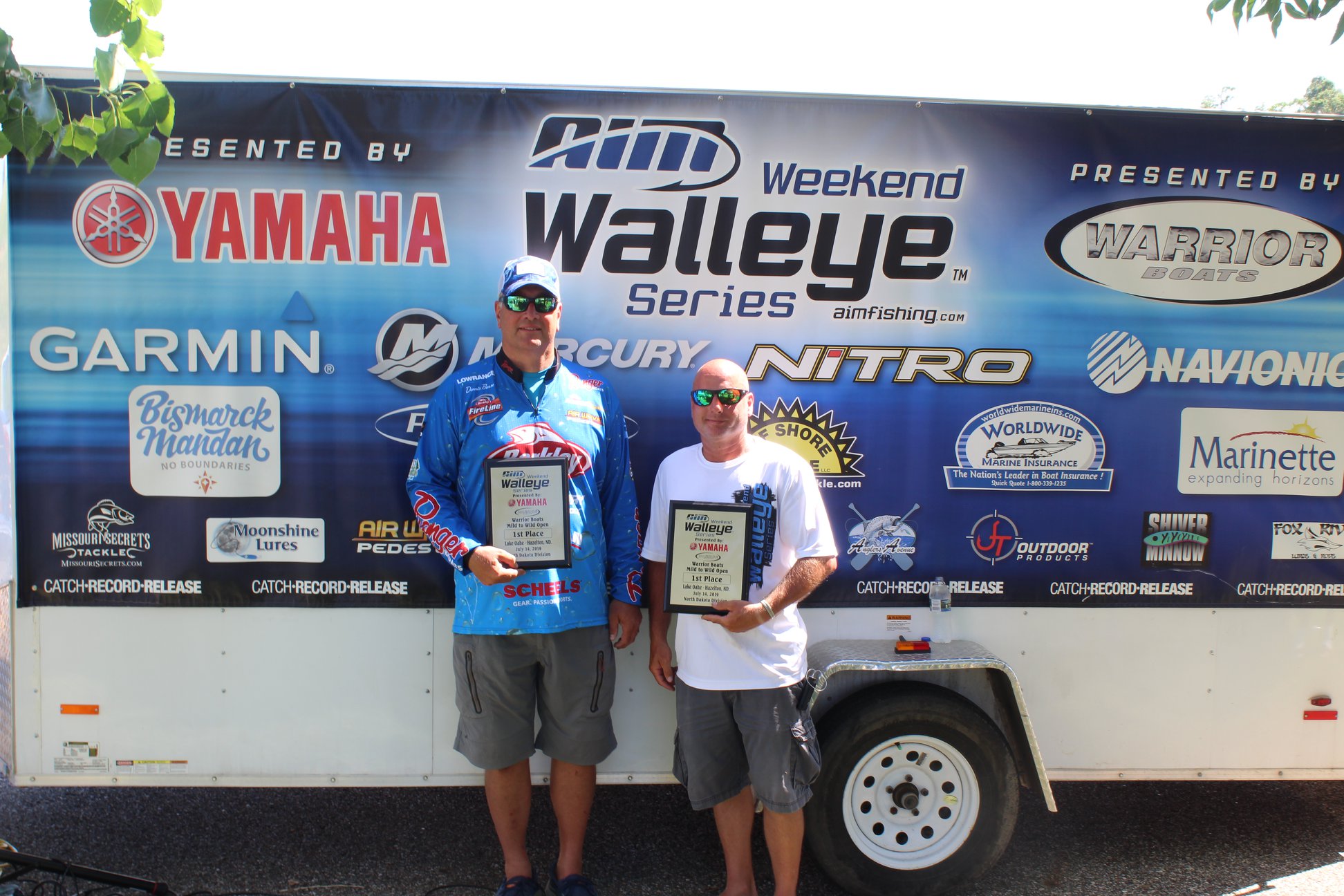 FOR IMMEDIATE RELEASE:  July 17, 2019 Pulling crankbaits is one of the go-to ways summer anglers clean up on the Missouri, and both first and second-place teams in the final AIM Weekend Walleye Series North Dakota Division Warrior Boats/Mild 2 Wild Motorsports Open qualifier, did just that with those Lake Oahe walleyes, with the first-place team cranking in 22.64 pounds, netting a $1,500 payday for Dennis Bense and Leon Leier.

“They’re both from Bismarck and each did it partnering for the first time with each other,” said Denny Fox, AIM national tournament director. “Another Bismarck team also finished second, and both teams literally nailed down their finishes minutes before they had to return. The North Dakota contingent is a great group to work with, and now, the countdown begins for the state ‘champeenship’ on Devils Lake in about three weeks.”

Bense and Leier did it trolling No. 7 Flicker Minnows on lead core, just five miles from the launch at Hazelton Recreation Area. Specific colors, Bense said, shall remain nameless right now, lest he suffer the wrath of a fellow angler.

Like a lot of the teams who competed here, Bense said they hit the water hard during pre-fishing.

“It was pretty tough. We thought we’d just go into Beaver Bay (that’s downstream a few clicks on Oahe’s east side), but it was so muddy that as soon as you put a lure in the water you couldn’t see it,” Bense said. They caught a few fish including a 25-incher and a 17-1/2, but things, and fish, got smaller on their third day of pre-fishing. They struggled to find the right-size fish at the North-South Dakota border, and the southern tournament boundary.

They pointed the bow of their Mercury 350 Verado-powered boat upstream, trying a trough off the main channel about five miles from the boat ramp they’d heard about. “We caught a 15 and an 18 there, so I said ‘here’s where we’re going to go,’” Bense related.

“It was just a short section along the main channel. Caught one jigging, and got three out there in the shallower water. The biggest we got was a 28, and that was a bonus, probably about the sixth or seventh fish we measured. Pretty much all of our fish came there,” he added.

Once they put that 28 in the boat, they started upgrading. “When we got our 19-1/2, we felt pretty good with what we had. It was better than anything we had pre-fishing,” Bense said. That kicker came with a half-hour before they had to make the run to check in.

And, Bense and Leier won it under a partial handicap, some would say. Bense’s normal partner couldn’t make it, so he teamed with Leier. “It was my first time fishing with him, and we’ve never fished in the same boat, but he was a great partner. He’s fished AIM events in the past and this is his third win,” Bense said. In other words, a great choice for a partner.

Bense said he will be fishing with his normal partner when AIM anglers head for Devils Lake.

Finishing second with 14.22 pounds for $1,000 were the husband-wife team of Daren and Heide Schneider, also of Bismarck. They turned their Nitro ZV21 and its 350 Verado south to do it at the border with South Dakota where other teams headed, because that’s where the bait was, they said.  This was only their second AIM event, and the first major tournament for Heide, and they especially like the Catch-Record-Release™ format. 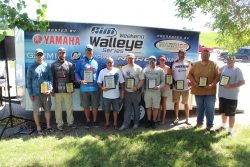 “I really like it obviously. It takes the game playing out of it for sure. Putting the big fish back makes everything better, and the teams that are out there, they’re really good sticks and it’s a lot of fun competing against them,” Daren said.

After 2-1/2 days of pre-fishing, they found a pattern with cranks that worked well in the shallows. On the last pre-fish day, they went north and also caught fish, but not the right ones, he said. Sunday they ran south, stopping first off Winona Island, across from the Standing Rock reservation, making two passes and picking up two fish.

“We got to our primary spot and there was another team there, which gave us some confidence,” he said. With good reason. “There were times we couldn’t keep four rods in the water with smaller fish,” he said. When the wind picked up a bit, they boated 17- and 18-inchers, and when it died, so did the fishing.

“We checked another spot and then we both agreed we needed to go back to our No. 1 spot,” he said. They found’em, deep.

“We also caught so many big crappie pre-fishing on lead core with No. 9 and 11 Flicker Minnows, and No. 7 Flicker Shads and Flicker Minnows. On Friday we caught 90 percent on pink but on Sunday we caught fish on a light blue color. We kept mixing things up until we found it. There’s so much bait down there that getting the bigger fish to bite was not an easy task.”

Third place money of $800 went to Kevin Stobb, of Williston, ND, and Timothy Marsh, Westby, MT. They landed 14 pounds of walleye. In fourth and winning $600 with 12.35 pounds were Grant Miller, Dickinson, ND, and Tyson Decker, Bismarck. Taking fifth and $300 with 12.15 pounds were Matthew Liebel, Williston, and Tory Hill, Minot.

Ok, North Dakota, qualifiers are over. Next up is for it all, and potentially Team Of The Year honors as well, at the North Dakota Divisional Championship on up again, down again Devils Lake, which appears to be gradually falling again. Launch is at Woodland Resort on Aug. 2-3. Minnesota, you’ve got a date with Vermillion at the Fortune Bay Casino for your final prelim July 28 before you head to your state championship on Lake Bemidji Aug. 16-17. No worries, Wisconsin. Your turn’s coming, with Marinette waiting to welcome you for two days of fun on Green Bay and environs, Aug. 23-24 for your state championship.

Follow it all via Garmin Fish & Hunt on our Facebook page. Visit our website for information on all AIM tournaments and how to register for any AIM event. 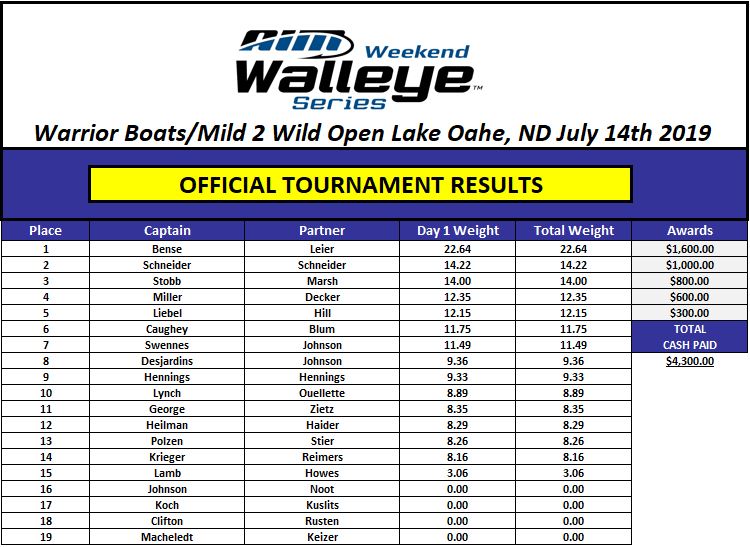