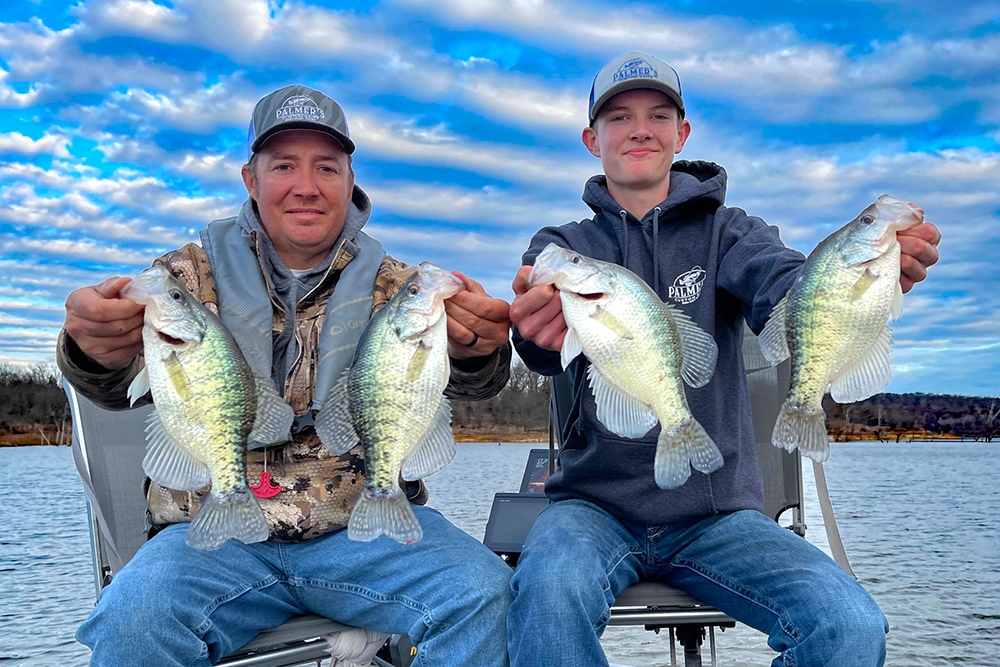 “We don’t have to worry about running out of baits,” the 17-year-old said with a laugh.

Palmer sees to that. A junior in high school, he operates a business making crappie jigs. When he isn’t in school, he is hand-pouring plastic baits, then handing them off to his mom, dad and sister for quality control and shipping. 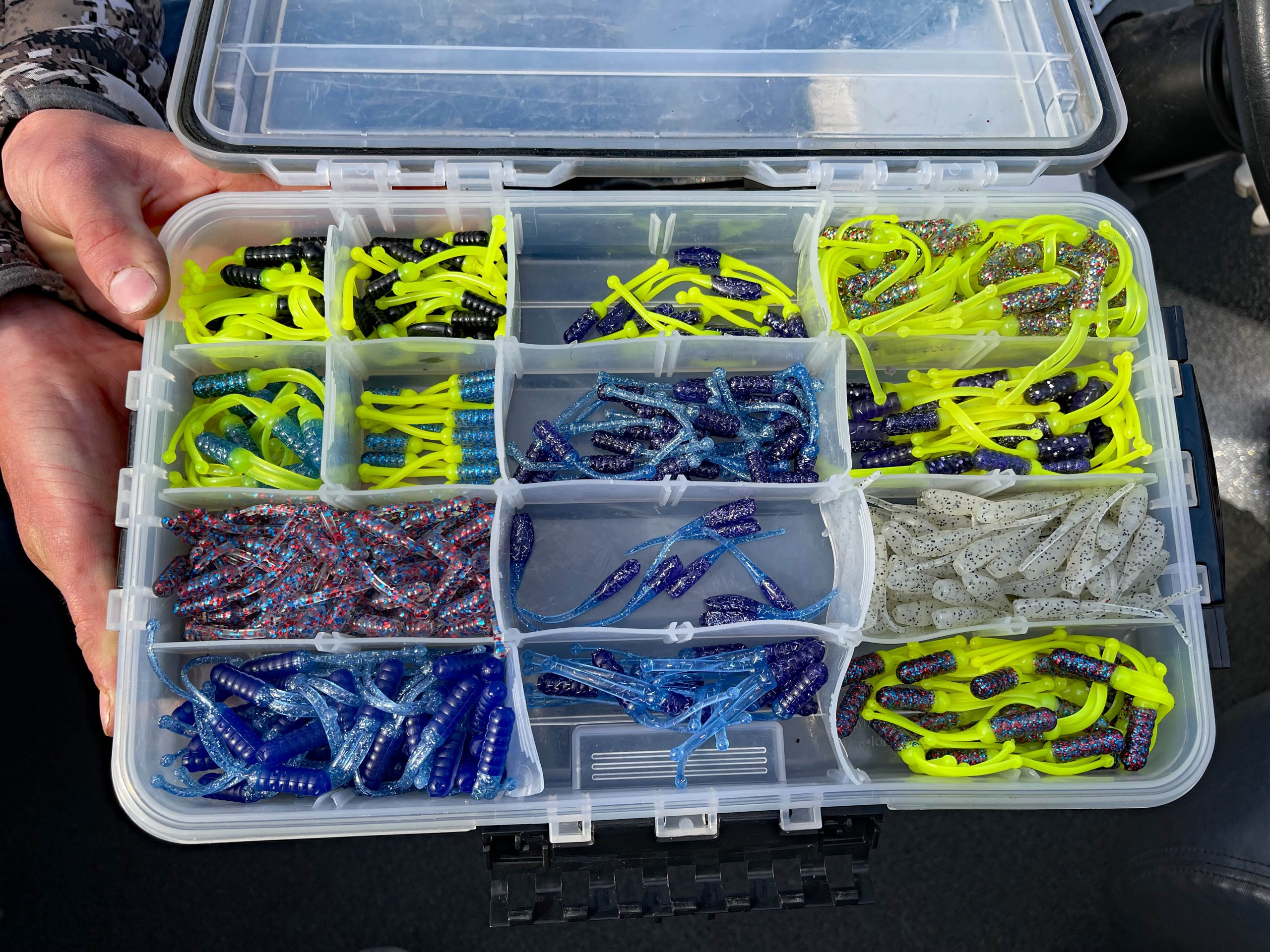 There is no assembly line here. Palmer is proud of the fact that he makes each jig in his family’s garage pouring the liquid plastic into molds and producing baits to be proud of.

His business, Palmer’s Custom Baits, was born in 2020 during the height of the COVID-19 outbreak. Students were quarantined after an outbreak at Alex’s high school and he found himself with too much free time.

“Alex kept calling me at work and telling me how bored he was,” said T.J. Palmer, Alex’s dad. “I told him, ‘Boy, you’re going to have to find something to keep you busy.’

“We both love to fish for crappies, so I bought him some used molds to make baits.”

What started as a hobby turned out to be much more. Alex watched YouTube videos on how to make plastic baits and he soon was producing three types of baits – single tail, double tail and what he calls a Minnow Minder.

The first time he and his dad tried them on their home lake, Truman in west-central Missouri, he quickly got a good review from the crappies.

“The first color pattern I made was firecracker with a chartreuse tail,” he said. “I dropped it down there and caught a big crappie and I was excited. I thought, ‘Wow, they really work.’ “ 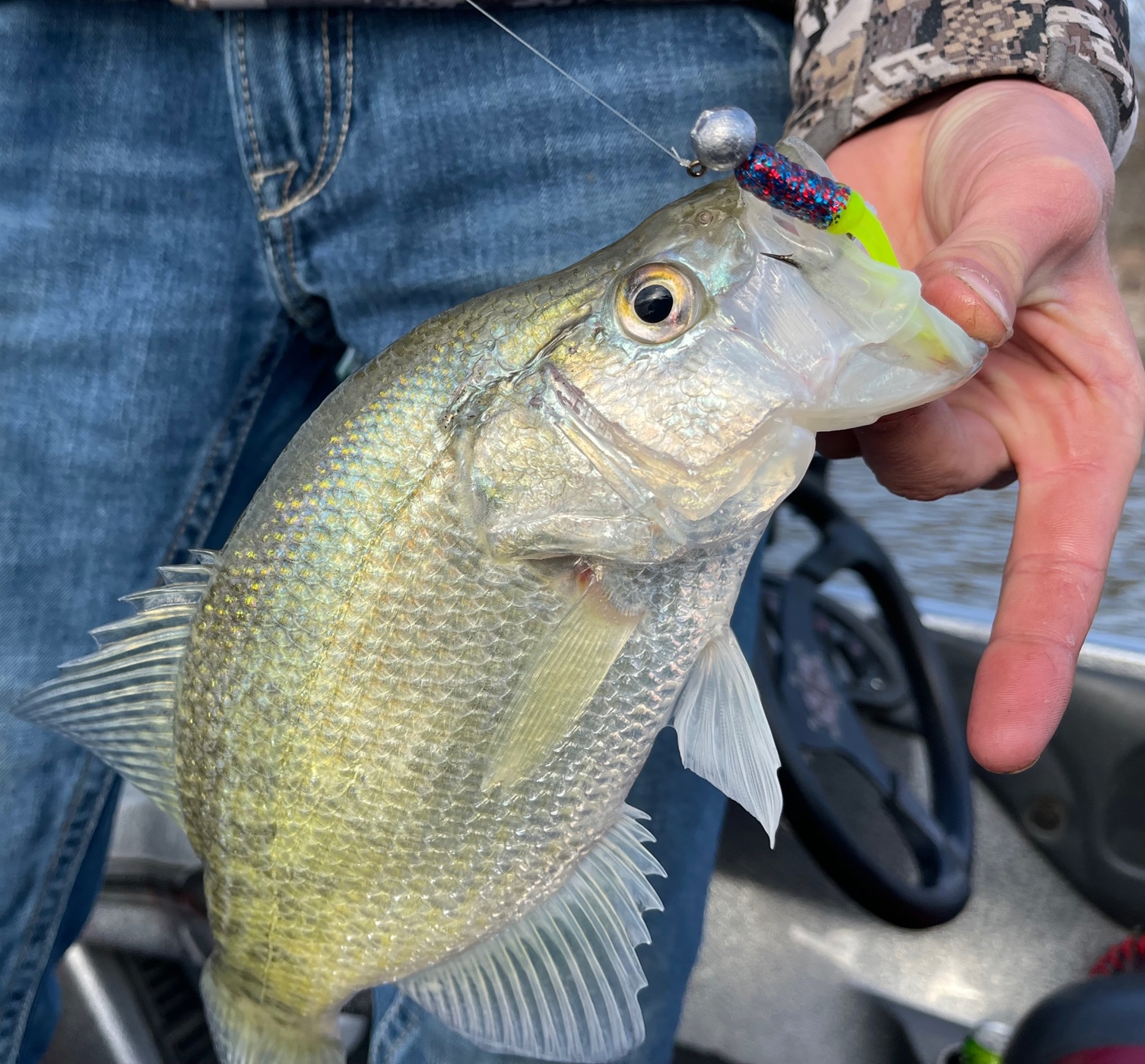 The Palmers, who live near Clinton, Mo., caught a limit of crappies that day and Alex became even more excited . Soon, the word spread and the Palmer family was filling orders for fishermen in the Truman Lake area.

The big breakthrough came in 2021 when T.J and Alex teamed to win the Crappie Masters National Championship at Lake D’Arbonne in Louisiana. Using the jigs Alex designed, they caught a two-day total of 14 crappies totaling 24.66 pounds. They became the first adult-youth team to win the championship and went home with $30,000.

Their showing was no fluke, though. The father and son had fished for crappies together since Alex was old enough to hold a fishing pole. When T.J. bought a LiveScope unit, which showed real-time movement of fish, they quickly mastered how to use it.

“I’ve fished for crappies most of my life,” T.J. said. “I used to wade fish for crappies on Cljnton Lake in Illinois.

“Alex just picked up my love of the outdoors. Now we’re on the water almost every day in the summer, unless there’s bad weather. He’s my partner. We learn together.”

The Palmers credited much of their championship to their experience with the Garmin LiveScope.  But they agreed that Alex’s lures played a part, too.

“We used a bait with a gold body and a blue tail, and that’s what they wanted,” Alex said.

The Palmers gained valuable advertising with the championship. They soon became swamped with orders from fishermen across the nation.

“I was overwhelmed at first, but I got it down to a system,” Alex said. “It was a lot of work but I was able to keep up with it.”

Meanwhile, Alex was able to keep up with his grades, too. When he was 12, he pleaded with his dad to let him go along on an elk-hunting trip to New Mexico. T.J. made his son a deal. Get straight A’s and you can come along.

Alex did just that, and has maintained his grades ever since. His dad uses that as incentive for his son to keep fishing in tournaments and making baits.

“We don’t have a television and we don’t want the kids to play video games,” T.J. said. “Too many negative influences.

“We want them to be outdoors—fishing, hunting and just enjoying nature—and I think they like that lifestyle.” 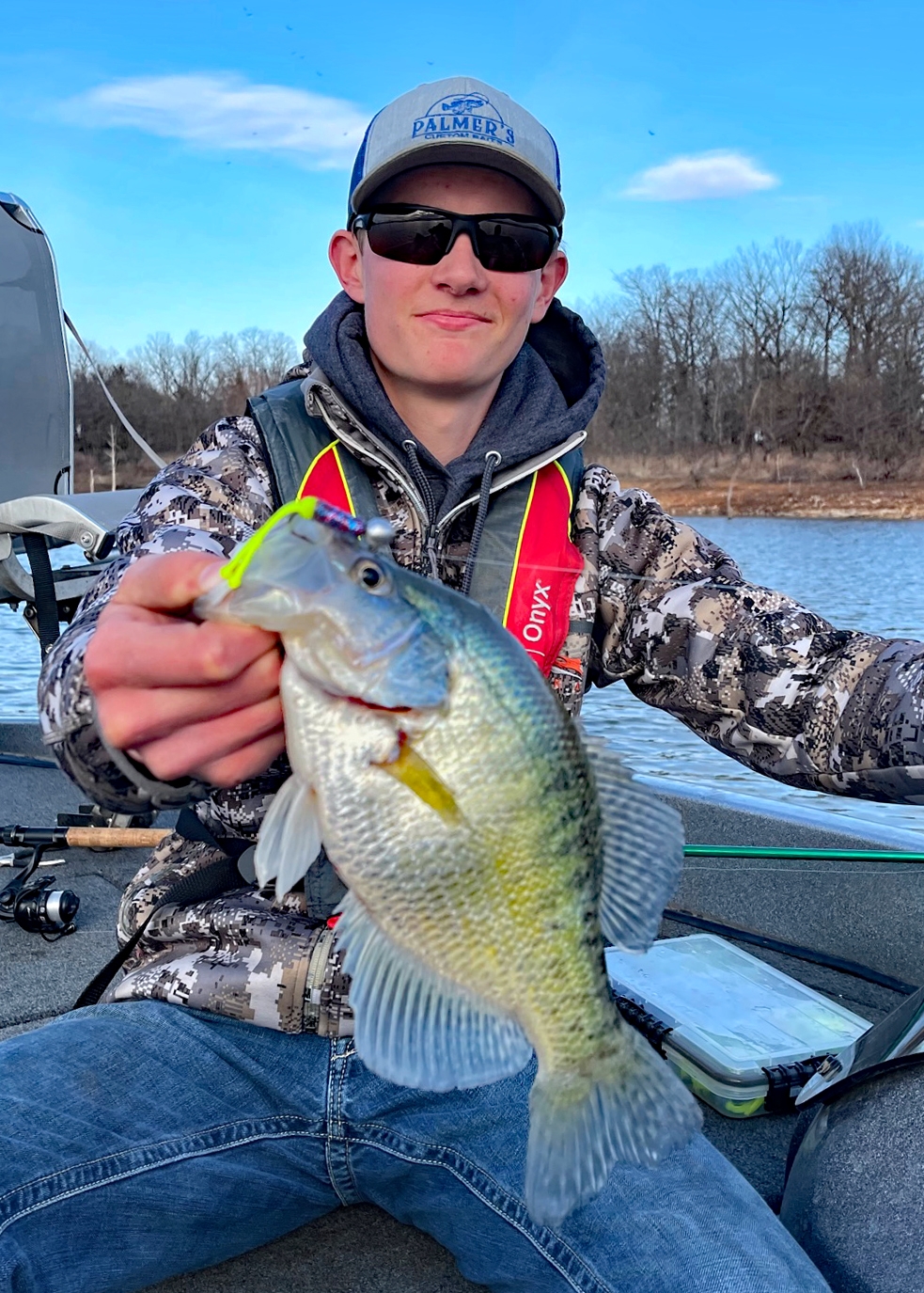 Alex and T.J. were back on Truman Lake on a warm, windy day this spring.. And as usual, they reeled in big crappies.

They scanned the flooded timber out from a spawning bank until their Garmin LiveScope marked a big fish suspended over some cover.

Alex used his 13-foot fishing rod to drop one of his homemade jigs right in front of the fish. He jiggled it slightly, then watched as the mark intersected with the jig.

Alex quickly set the hook and pulled a fat female crappie to the surface. “That one will go over a pound,” he said matter-of-factly.

The Palmers spent the next hour and a half keying on big marks and catching healthy crappies. The fish went back on this trip, but they knew they would have had a limit of fish if they were keeping them for the frying pan.

Some fishermen think of spring as the best time to catch crappies, but the Palmers fish for them year-round. They say some of their best days come in the dead of winter.

“We’ll see some huge schools of crappies here on Truman,” T.J. said. “The weather can be miserable, but we’ll still catch fish.”

As long as there are diehards like him around, Alex knows he will be in business.

“I don’t think we’ll ever take this real big. I don’t want to mass-produce my baits,” he said. “But it’s fun right now. And I’d like to be in the fishing industry somehow when I’m out of school.”

For more information on the baits, go to Palmer’s Custom Baits on Facebook.

Brent Frazee is an award-winning writer and photographer from Parkville, Mo. He retired from The Kansas City Star in 2016 after serving as outdoors editor for 36 years. He now freelances for websites, magazines and newspapers.