CrappieNOW: More Research on Live-Imaging Sonar Out of Arkansas 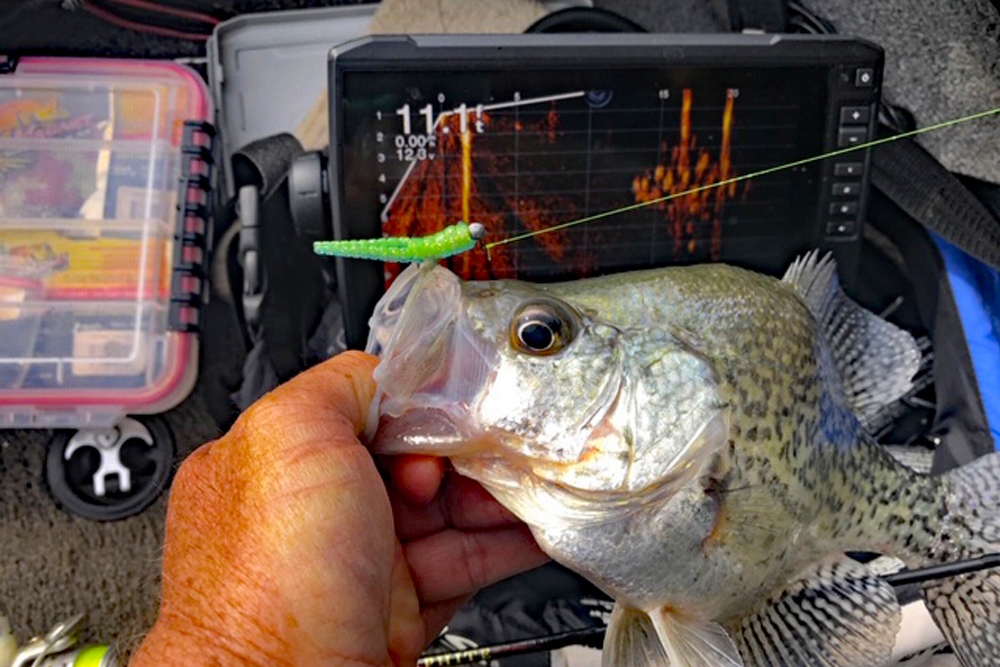 Two months ago, we shared research conducted by the Kansas Dept. of Wildlife and Parks (KDWP) on the potential impacts of live-imaging sonar (LIS). In that study biologists said that while LIS may improve angler catch and size of crappie by casual weekend anglers, “overall differences were statistically minimal.”

Now comes yet another LIS study by the Arkansas Game & Fish Commission.

In his story about the new research, Randy Zellers, Assistant Chief of Communications for Arkansas G&F wrote that, “Tackle-shop talk may have some anglers convinced that the recent advancements in live-imaging sonar will be the end of fishing as we know it. Research conducted by the Arkansas Game and Fish Commission may set those anglers’ minds at ease.”

Andy Yung, AGFC fisheries biologist in Hot Springs, recently shared the results of a study conducted last year on live-imaging sonar and crappie anglers. The research indicated that anglers using LIS did catch more crappie, however Yung said so far there is little evidence to support any panic on the part of anglers or resource managers.

Yung says another factor for the study was the popularity of live-imaging sonar with crappie anglers and their ability to find crappie schooled up offshore with the units.

“As a biologist and crappie angler myself, I’ve heard plenty of discussions about live sonar, some of them pretty heated,” Yung said. “As an agency, we needed to look at this in the real world and how the application of this technology may or may not impact the fishery.”

AGFC biologists conduct creel surveys and angler interviews on a regular basis throughout the state, so the best method to gather data for Yung’s study was to take advantage of the work already being conducted and add a series of questions to the interviews concerning the new technology.

Nearly 700 boats with well over 1,000 anglers were interviewed. More than one-third of the anglers had live-imaging sonar available on their boat, proving the popularity of the technology.

“We also asked the anglers if we could count and measure their catch,” Yung said. “We wanted to find out if anglers using live-imaging sonar caught more fish, caught bigger fish, and ultimately brought more fish home to eat.”

Some anglers are concerned that those who have live-imaging sonar are able to pick and choose targets and select larger fish, leaving fewer large fish for other anglers to catch. According to Yung, those fears can be laid to rest, at least when it comes to harvest.

“When we looked at the size of fish anglers kept, the sizes of the fish kept were nearly the same,” Yung said. “Actually, the anglers not using live-imaging sonar had fish that were slightly heavier, but the difference was within an ounce or two so it was statistically irrelevant.”

Yung also says that in many fish species, the largest, oldest fish are usually less productive than some of the younger year-classes of fish, so, from a biological point of view, removal of those larger fish may not impact the fishery.

“By the time a crappie reaches the 2-pound mark, it has already spawned multiple times and contributed to the population, and it’s probably not contributing as much as some of the 10-inch fish in that system,” Yung said. “At that age, it may not make it to the next spawn anyway.”

“The difference in actual number of fish taken home between the two groups of anglers only averaged 3 or so fish per trip,” Yung said. “The non-live-sonar anglers did keep a higher percentage of their catch, but they were catching them at half the rate, so the difference really wasn’t something that would cause concern on a broad scale.”

Yung said more parties with live-imaging sonar did turn in limits, but the difference was pretty small when real numbers were compared. In fact, the number of limits seen was actually much lower than some anglers may expect.

“Of the 700 parties we interviewed, we saw a total of 16 limits,” Yung said. “That’s about 2.5 percent of all the anglers we interviewed. And seven of those 16 limits came from the same lake, one that’s well-known for crappie angling. A couple of those limits also came from the same angler, a crappie guide who probably would be bringing home fish with or without live-imaging sonar.”

Yung also points out that crappie are a short-lived species in Arkansas, and harvest-oriented angling has not shown to be detrimental to long-term crappie populations.

In Arkansas, the annual mortality rate on crappie is pretty high anyway. About 65 percent of crappie die each year and are being replaced with the young of the year.

“The turnover in crappie is pretty fast here, so if higher harvest were to begin to play a factor, the population could rebound very quickly with a regulation adjustment. But for now, there’s no indication of that happening on a statewide basis.”