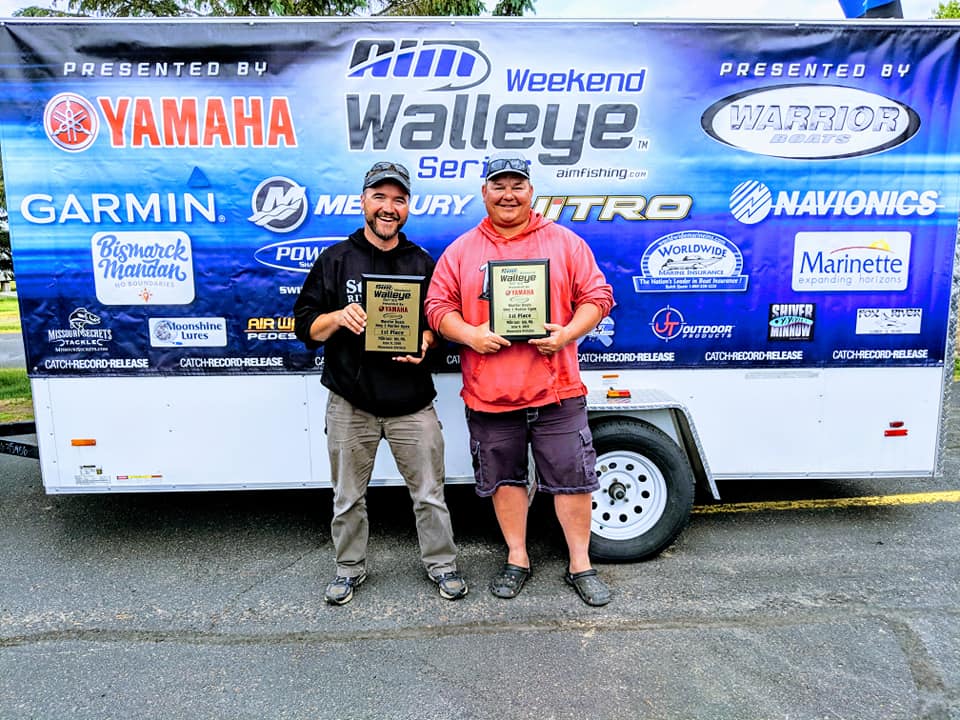 FOR IMMEDIATE RELEASE:  June 12, 2019 Mille Lacs provided one for the record books with the AIM Weekend Walleye Series Warrior Boats/Highway 3 Marine Open, as it took five fish each averaging more than 10 pounds—yup, 10—to win Jason Slipy and Jeff Sobiech $8,000 Sunday in the first Minnesota tournament qualifier this season. 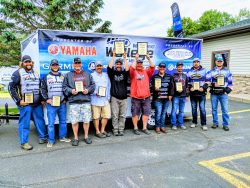 “What a crazy good lake Mille Lacs is,” said an exuberant Denny Fox, AIM national tournament director. “Before the kickoff Sunday, the prediction was 40 pounds would do it. But 51? No way. Well, yes way! The top 15 teams each boated at least 40 pounds. To give you an idea of how interesting our format makes things, the team that won the national championship last week in North Dakota at Bismarck-Mandan is from Minnesota, and they finished 51st here.”

Taking home $8,000 were Slipy, of Zimmerman, MN, between Minneapolis and St. Cloud, and Sobiech, of Lakeland, east of St. Paul. Slipy said they fished Mille Lacs a lot growing up, but this day was extra special, and not just because they went home with the cash.

He added that because of the cool weather, the lake is about six to 10 days behind schedule, and during pre-fishing, they found only small fish along the weed lines. They’d found fish in the mud mid-lake, but they called that trip due to impending weather reports.

“I called my partner and said it looked like it will blow 30 (mph) Sunday, and we’ll never be able to fish there effectively. So I told him Saturday, let’s change plans, because I’d found some really big fish shallow Thursday,” Slipy said.

They headed to the lake’s south end near the Andersons Reef. If it was going to blow 30 mph, they were going to stay close to the launch at Mac’s Twin Bay. Well, it was serendipitous. 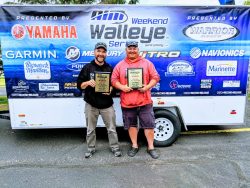 “We found a really good spot, kind of a community hole. We thought we could leave that spot with about 25 pounds and keep going. Well, we never left it. We didn’t have to. It was a small, 11-foot rock pile and we repositioned on it about nine times, and four of those we immediately upgraded fish. You threw in the bobber and it was gone,” Slipy said.

Yup, that gives you a clue how they did it, the simplest and one of the oldest fishing methods known: a bobber, hook and a leech. Big’uns, he said, as big as his local bait shop lady could hand-pick.

“The top of this pile was maybe 60 feet wide by 200 long. We’d move about 20 feet at a time. Jeff’s first cast, and the bobber went down, and he missed it,” Slipy said. “He put another leech on and he threw it out, and he immediately caught a 28-3/4-incher. So from that point, I said, ‘I think there’s enough big ones here that we don’t have to move.’”

There were anglers in the same area, but they were shallow. Another tourney boat came close, and jigged with shiners. But those big-as-big could get leeches, he said, “were 100 percent the difference-maker.” By 11 a.m., they figured they had roughly 51 pounds on their score card. After about three hours of fishing. For five fish.

“Jeff doesn’t fish with GPS, he’s a bit old-fashioned, so we looked at my graph, and I pointed out one spot we hadn’t fished. That was the last move we made. That’s when I caught our 30-3/4-incher, and a 28 back-to-back,” Slipy said.

As Sunday’s cold front approached, Slipy moved to a plain hook and Sobiech stuck with a colored hook and a bead. That plain hook was what fooled the 30-incher. “Jeff got the other four of the big ones,” Slipy acknowledged. “The weirdest part is, we both caught legit 10-pounders, the biggest we’ve ever caught. Jeff got a 29, and it was just a tank. We thought, ‘what are the chances, to catch 29s and 30s the same day. It doesn’t happen very often on Mille Las. There’s a lot of 27s and 28s, but those bigger ones are rare, and catching two in the same day was really shocking.”

Going in to the event and the weigh-in at McQuoids Inn, Slipy said they thought they had a chance to take it, but they also knew they had a lot of competition. “I know people who would catch five 28s. But it’s that 30-incher that’s the difference-maker. Once we got that, I said to Jeff, ‘now they’re going to have to bring it. There’s no way when your bottom fish was a 28. I said to Jeff, ‘if someone beats us, they deserve it.’”

He fished AIM tournaments here and on Leech lake last year, and will be on Leech again when AIM visits July 7, and has nothing but praise for AIM’s unique Catch-Record-Release™ format.

“I like it. You don’t have to worry about keeping fish alive. You’re always dealing with that. With the bigger fish, it’s nice to just let them go. We legitimately had two 10-pound fish. This shows what Mille Lacs has. The fish weren’t bounced around and Sunday was so rough you would have killed so many of them. All you have to do is worry about your camera dry. That’s your biggest concern,” he said.

The second-place father-son team of Luke and Neil Petrowske of Forest Lake finished more than three pounds behind the leader, but their total bag of 47.90 pounds for one day would usually be enough to win some two-day tournaments elsewhere. They went home with $2,400.

They pitched spottail shiner minnows with roundball jigs near three points in their 350 Verado-powered unit they’d found pre-fishing on the lake’s west side. They’re both very used to finding biggies on Mille Lacs.

“We’ve been fishing that lake pretty hard for 15 years, but this was unbelievable,” son Luke said, describing the waves of bites they were on.  “By 10:30 a.m., we were throwing back 24s, 25s and 26-inch fish. It was a pretty amazing day to say the least.”

We checked our first spot pre-fishing Friday and Saturday, and first fish we stuck Friday was a 28-3/4, on the third cast,” he continued. Saturday, they stuck a 24, 26, and a 27 in five casts. They left. On Sunday, it began again, but not after a few moments of sheer terror there, he said.

“We pulled into our first spot, and didn’t catch a fish for 20 minutes, and we looked at each other and said, ‘is this really happening?’” Luke said. “But we slid over 50 to 100 feet and once we got into that position, there were fish just piled in there.”

They began pitching jigs up a shallow rise from 18 feet, to about 12, he said. It was THE move that did it. “There were 20 minutes or so of not catching, and then all of a sudden we’d get one on every cast.” They upgraded throughout the day, and shortly after noon, they made their last upgrade, to a 28-1/4-inch fish. They looked over their card.

“Our smallest fish was 27-1/2, and we had two 29s. I looked, and thought, what are the chances we caught the same fish?” he said. They looked. They weren’t. Totally different.

“We fished until 2 p.m., and turned in our card around 2:25. We were out of our five dozen minnows. I think we could have gotten rid of that 27-1/2 but we ran out. We tried plastics and caught only one or two fish. It got pretty windy, so we wanted to beat the rush. Going in, I was very confident that we could get a limit of 27s. I never thought we’d get four over 28,” Luke said. But that 51 pounds blew everyone away. “That 51 is an amazing weight. I never thought they’d win by three pounds.”

This was the Petrowske team’s second AIM tournament ever, and like anyone who’s ever fished one, they’re hooked. “Just the photo and release, it’s more fun than killing the fish. And the format changes the way you fish. I wouldn’t have gone where I did if we were fishing for slot fish. On Mille Lacs, we never caught a fish in two days of pre-fishing under 22 or 23 inches.”

That tells you a lot about the “crazy good” fishing on Mille Lacs as Fox described it. Here’s more:

This Sunday, AIM entrants in North Dakota will find out if the same is true for Lake Audubon, an offshoot of Lake Sakakawea, at Totten Trail, hosted by the Totten Trail Bar & Grill. This lake is littered with humps and holes. In other words, perfect walleye country. Stay tuned later this week for a preview. And, stay tuned for Navionics Big Fish Thursday, to find out who will win some new SD chart cards.

Follow your favorites on tournament day via Garmin Fish & Hunt, and to see what team wins each tournament weekend, go to our Facebook page. Visit our website for information on all AIM tournaments and how to register for all AIM events.