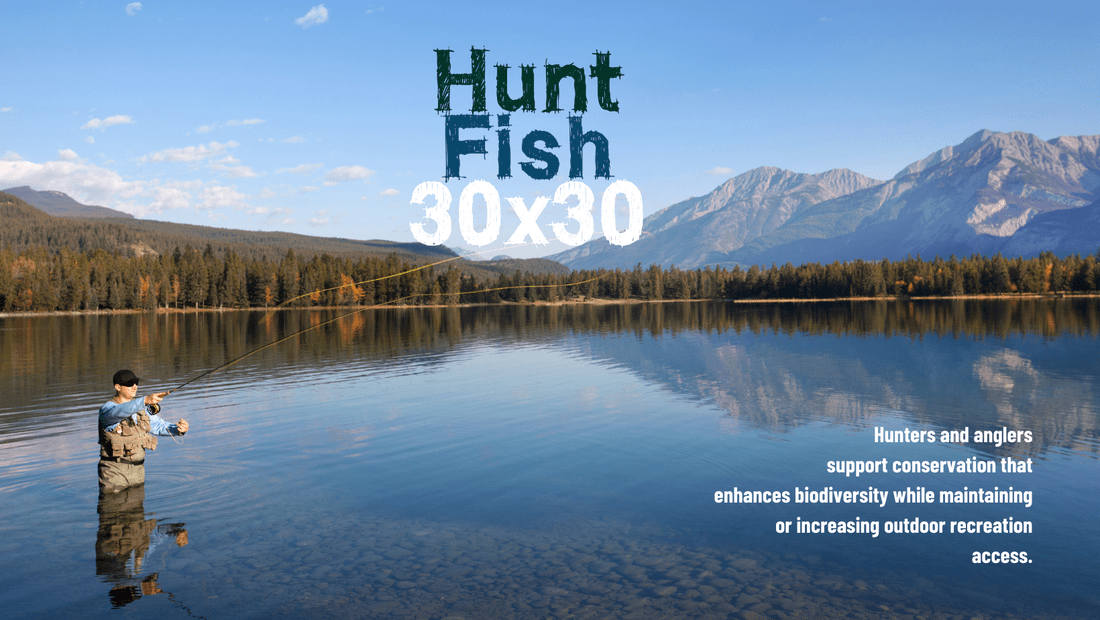 Earlier today, nearly 200 people attended the Congressional Sportsmen’s Foundation’s (CSF) first virtual policy briefing of the year to discuss the importance of including the hunting and fishing community in the development of policy related to the global 30 by 30 initiative.
The 30 by 30 initiative aims to conserve 30 percent of global lands and waters by 2030. To date, much of the interest to achieve this ambitious goal has been focused at the state level, however, efforts at the federal level are beginning to surface. President Biden signed an Executive Order in January which included language for relevant federal agencies to develop recommendations to meet the 30 by 30 initiative as part of a broader effort to address climate change.
The virtual briefing consisted of a panel of stakeholders and experts from the hunting, angling, and broader conservation community who discussed various perspectives on the 30 by 30 initiative and the role that the sporting conservation community plays in the development and implementation of 30 by 30 policies. The panel included Mike Leonard, American Sportfishing Association; Tom Cors, The Nature Conservancy; Arthur Middleton, University of California at Berkeley; and Andy Treharne, Congressional Sportsmen’s Foundation.
Panelists at the virtual briefing offered their perspectives on ways to ensure 30 by 30 policies incorporate the interests of sportsmen and women while also recognizing and including the significant role of private landowners and working lands, along with well-regulated fisheries, to meet identified conservation needs. Martha Williams, Principal Deputy Director of the U.S. Fish and Wildlife Service also participated in the virtual briefing.
Congressional Sportsmen’s Caucus (CSC) House leaders also spoke during the virtual briefing, including Co-Chair Rep. Debbie Dingell (D-MI), Co-Chair Rep. Richard Hudson (R-NC), Vice-Chair Rep. Jimmy Panetta (D-CA), Vice-Chair Rep. Bruce Westerman (R-AR), and CSC member and Dean of the House of Representatives Rep. Don Young (R-AK).
As America’s original conservationists, sportsmen and women offer a unique, and important, perspective regarding efforts to conserve our nation’s diverse ecosystems. CSF supports policies to conserve biodiversity but believes any policy must recognize hunting and fishing as sustainable wildlife-dependent activities and that goals are achieved through a science-based, stakeholder-driven process.
“Conserving our nation’s rich natural resources will always be one of my top priorities in Congress; however, I’m concerned that a currently undefined 30 by 30 initiative may undermine this goal. We should be accessing our lands and waters for a variety of reasons, including multiple use, outdoor recreation, and hunting and fishing. Locking up lands and waters permanently and restricting management and responsible resource utilization actually does more harm than good and ignores centuries of efforts by hunters and anglers, who are true conservationists. Protecting the environment is about quality, not quantity, and simply setting an arbitrary acreage goal won’t allow land managers to properly steward resources. I hope to continue working with the sportsmen’s community to ensure we all have access to the lands and waters we enjoy for years to come,” said House Committee on Natural Resources Ranking Member and CSC Vice-Chair Rep. Bruce Westerman (R-AR).
“As America’s original conservationists, sportsmen and women, as well as private landowners, should have a seat at the table when it comes to discussing and implementing policies to meet the 30 by 30 initiative at both the state and federal levels,” said CSF President Jeff Crane. “We are pleased to work with enthusiastic experts in both policy and conservation on this issue, and we commend and appreciate their steadfast support of, and commitment to, recognizing the value of the sporting conservation community in these discussions for the future of our nation’s conservation and outdoor opportunities.”
In an effort to raise awareness about the role of hunting and angling in biodiversity conservation, last fall, CSF and conservation partners launched the “Hunt Fish 3030” website in order to promote the value of America’s sportsmen and women, recognize our decades of achievements as leaders of biodiversity conservation, facilitate the recommendations of the sporting conservation community as they relate to 30 by 30, and to serve as a resource for policymakers when evaluating 30 by 30 polices.
Currently, the HuntFish30x30 campaign has 50 signatories from both national and state organizations. In addition, interested individuals can also sign a petition in support of the hunting and fishing community’s statement on the 30 by 30 initiative.
Through their activities, sportsmen and women understand better than anyone the pivotal role that healthy fish and wildlife habitats play in protecting and enhancing biodiversity. Hunters and anglers have been advocating for, and funding, biodiversity conservation for more than 100 years.
30 by 30AdvocacyConservationCSF
« Yamaha, Skeeter Boats, B.A.S.S. Team Up to Host Redfish Cup Championship Tournament
St. Croix Rods Voices Of Victory: Derek Hudnall »