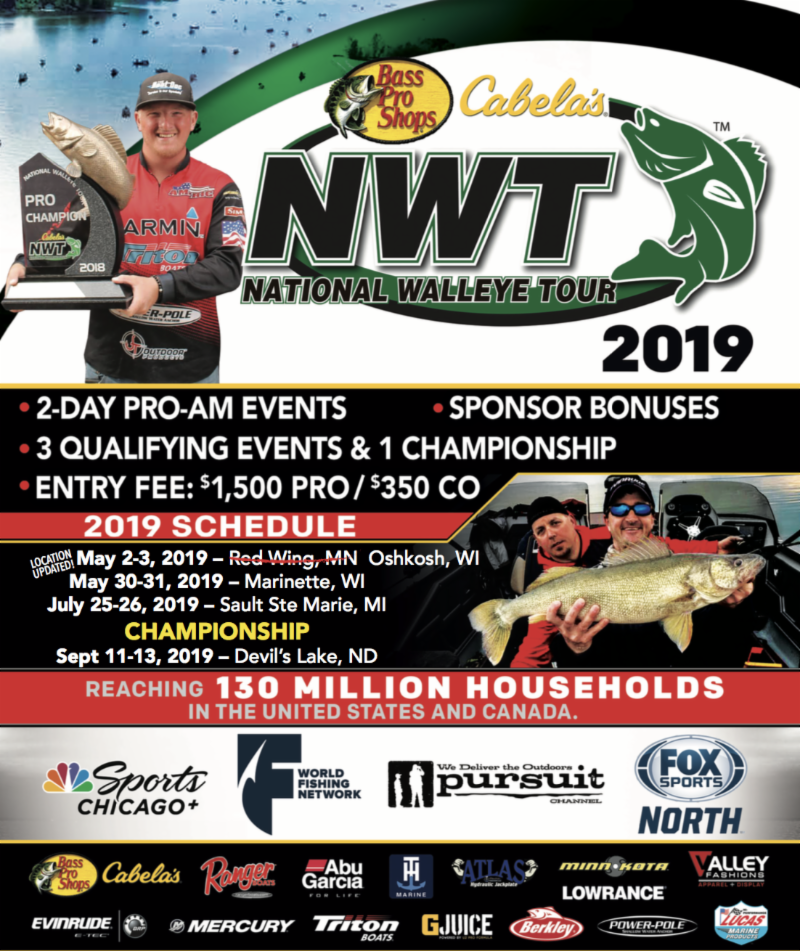 OSHKOSH, Wis. – For the second consecutive season, Wisconsin’s Lake Winnebago will host the season-opening event on the most lucrative tournament trail in competitive walleye fishing, the National Walleye Tour presented by Bass Pro Shops and Cabela’s. Winnebago hosted the 2018 season opener when flood conditions along the Mississippi River forced a change in venue. This year’s opener was again slated for Red Wing, until a record 39 inches of snow fell during February, prompting officials to preemptively move the tournament due to flooding. The dates of the event, May 2-3, remain unchanged. While the Fox and Wolf rivers are high themselves, both are fishable and are producing impressive catches.

“The state of the fishery is strong,” said NWT Championship winner Max Wilson, who lives in nearby Lomira, Wis., and cut his teeth on the Winnebago system. “I think Winnebago is on the upswing; there’s certainly no shortage of walleyes. The good news is the abundance of shad is back to normal. We’re at the point where there’s enough bait where the walleyes are well fed, but they’re not overloaded. They’re hungry and willing to bite; it should be stellar.”

“The thing that really excites me about the change is having two tournaments in Wisconsin,” said Berkley pro Korey Sprengel, who won last year’s opener on Winnebago. “I really think this could be a record-setting year in terms of participation. We could possibly have 150 boats. That excites me more than fishing Winnebago itself. I’m super excited we’re going there, but I’ve also lost a lot of sleep. It’s not a fishery where anything is a given. Last year, I literally had no time to think about it. This year, I’m kind of freaking out. It is not an easy body of water to fish.”

The main lake recently iced out, which means the major wave of spawning is imminent.

“The Wolf is ripping pretty good,” added Wilson, the Triton-Mercury pro. “The water is up in the trees. The Fox is also high. It takes patience and heavier weights, but they’re eating; the bite is strong. By May, 95 percent of the fish will be spawned out and will be heading back towards the lake.”

“The major difference between this year and last year is that the water is already high this year,” Sprengel explained. “Last year we got like 8 inches of rain during practice, which made it high right before the tournament. But the water was already warm when it got high. This year it’s already high, which means it should take longer to warm up. The high, cold water will probably slow the migration. The water will also be clearer than it usually is.”

Wilson said that the walleyes head upstream to spawn along river edges and in the marshes. Once they’re finished, they head back down towards the main lake. While Wilson is confident that the peak spawn will be complete, he’s unsure exactly how far the walleyes will have migrated back.

“It can be won in the main lake; there are a lot of consistent bags that can be had,” he said. “But the kicker fish are harder to come by. There will be a lot of check cashing in the main lake. Most of the kickers come from the rivers and upper lakes. The river is a natural pinch-point for bigger fish. They like to sit there and rest.”

Wilson and Sprengel both agree that trolling on Poygan, Winneconne, and Butte des Morts will be common. Other popular techniques include live-bait rigs in the rivers, casting crankbaits to specific structure, and pulling flies. Last year, local pro Russell Gahagan pulled flies with pencil weights in the Fox River en route to a second-place finish.

“There’s a million different ways to catch them,” said the 22-year-old Wilson. “The thing about Winnebago is understanding the timing. There are definite bite windows, especially in the upper lakes. Those fish will make you wait all day sometimes. It’s notorious for turning on in the afternoon. To get the winning bag, you’re going to have to piece a few different patterns together, just like Sprengel did last year.”

“Casting both the Berkley Cutter and Digger is going to come into play again,” Sprengel predicted. “That’s how I like to fish though. I’d rather go to a specific area and pinpoint a fish. Time is everything in these tournaments; the more efficient you can be, the better you will do. I’d rather not randomly fish a roaming school.”

Anglers are permitted to keep seven walleyes each day and weigh their best five. Culling or upgrading is not permitted.

“I think 27 or 28 pounds will get you to the top 10,” predicted Wilson. “You’re going to see a lot of 10- and 12-pound bags. It’s just a matter of where those bigger fish are setting up. Guys will have to put in long practice days to figure out those bigger fish. Thirty-three to 35 pounds will probably win it. A few guys will have a monstrous day, but then they need to back it up. That (Fox) river can be so hero or zero with changing winds and current.”

“I’m thinking around 15 or 16 pounds will put you in contention,” concluded Sprengel. “You might not win, but you’ll be right there. It’s going to be tight because it’s pretty easy to catch 10 to 12 pounds. You just don’t know where your big bite is going to come from. Last year, everything just happened right for me.”