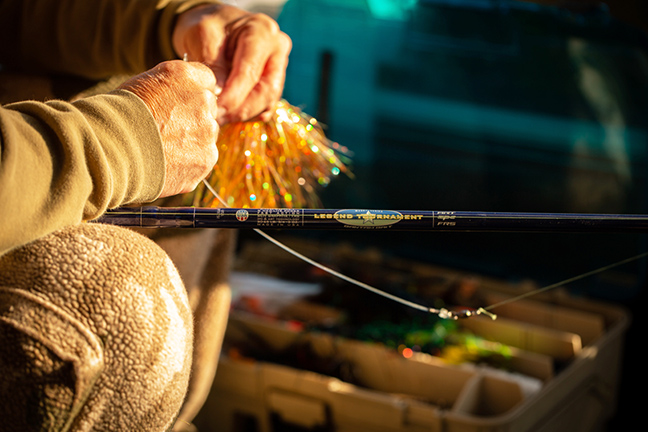 Park Falls, WI (May 20, 2019) – A ¾-oz. bucktail spinner was the prototypical lure employed throughout the early decades of musky fishing. In the years since, however, musky terminal tackle has become increasingly diverse and highly specialized. As lure manufacturers cranked out the big, bigger and gigantic baits demanded by musky anglers, St. Croix Rods eagerly owned the mission of designing and selling the equally specialized rods engineered and built to effectively fish every one of them.

Musky enthusiast and St. Croix pro, Chas Martin, has witnessed the evolution of musky fishing, like St. Croix. “We’re seeing the trend now that anglers are scoring on waters with down-sized presentations. In response, St. Croix has a whole series of rods that cater to these smaller presentations and the design of these rods allows anglers to effectively throw smaller baits – cast farther as well as work these lures in the accurate and nimble way that’s required. They really allow you to be a lot more precise. For example, The 7’10” medium power is my go-to rod for small jerkbaits and minnowbaits between 5 and 7 inches; it loads nicely and facilitates long casts into the wind,” Martin says.

Another benefit to the medium and medium-light power rods is they allow the correct pressure to be put on baits to prevent over-hooking or bent hooks. “Along those lines, the 8’6” medium-light has been my go-to for throwing lipless crankbaits and swim jigs, which are really effective earlier in the year,” says Martin, who also also prefers the model for down-sized deep-diving crankbaits. “Whether I’m working a weedline or rocks, I’m pumping that rod all day long and the rod really decreases fatigue. And as far as the 9 footer, that’s my in-line spinnerbait and smaller topwater rod, which is great on a number of levels including bombing casts a country mile, loading correctly on the hookset, and deeper figure-8s. Honestly, the entire line allows me to fish longer with less fatigue.

“Another thing that’s really cool is if you ask a crowd of musky anglers ‘How many of you have been injured by musky fishing — or just injured in general?’ The majority of anglers are going to raise their hand. The Musky Downsizer rod series allows more anglers to fish muskies with less physical stress on the body. St. Croix’s mission is to provide every angler with the upper hand, and I think this series is another way to work more lures more effectively.”

Fellow St. Croix pro, Jeremy Smith of Lindner’s Angling Edge, agrees. A self-described small-river musky nut, Smith espouses the results-oriented benefits of the full spectrum of smaller baits during early and late-season cold-water conditions, as well as whenever and wherever muskies receive reduced fishing pressure. “Low-pressure fish tend to be much less selective,” Smith says. “Throwing smaller baits helps any angler to stay in the game longer by decreasing angler fatigue and maintaining the focus and concentration it takes to convert on any given cast. Those critical benefits aside, smaller baits are also better options for the precision target casting that’s often required on small waters.” Smaller baits are also a great option for throwback applications when fish have followed—and ultimately refused—a larger bait.

St. Croix Promotion Manager and in-house musky nut, Rich Belanger, talks about the balanced performance characteristics of these three carefully engineered rods: “The Medium and Medium-Light power blanks are key to loading and casting these rods with the smaller, lighter lures they were designed for. And while that seemingly light power might concern some, fast tapers and generous lengths provide rapid access to that power during the hookset; they really are the perfect tools for presenting downsized baits with the guts to hook, fight and land even the biggest fish.”