Erdman and Hurst Top The Field, Winning Wisconsin Team Of The Year Honors And That $4,000 Yamaha Kicker 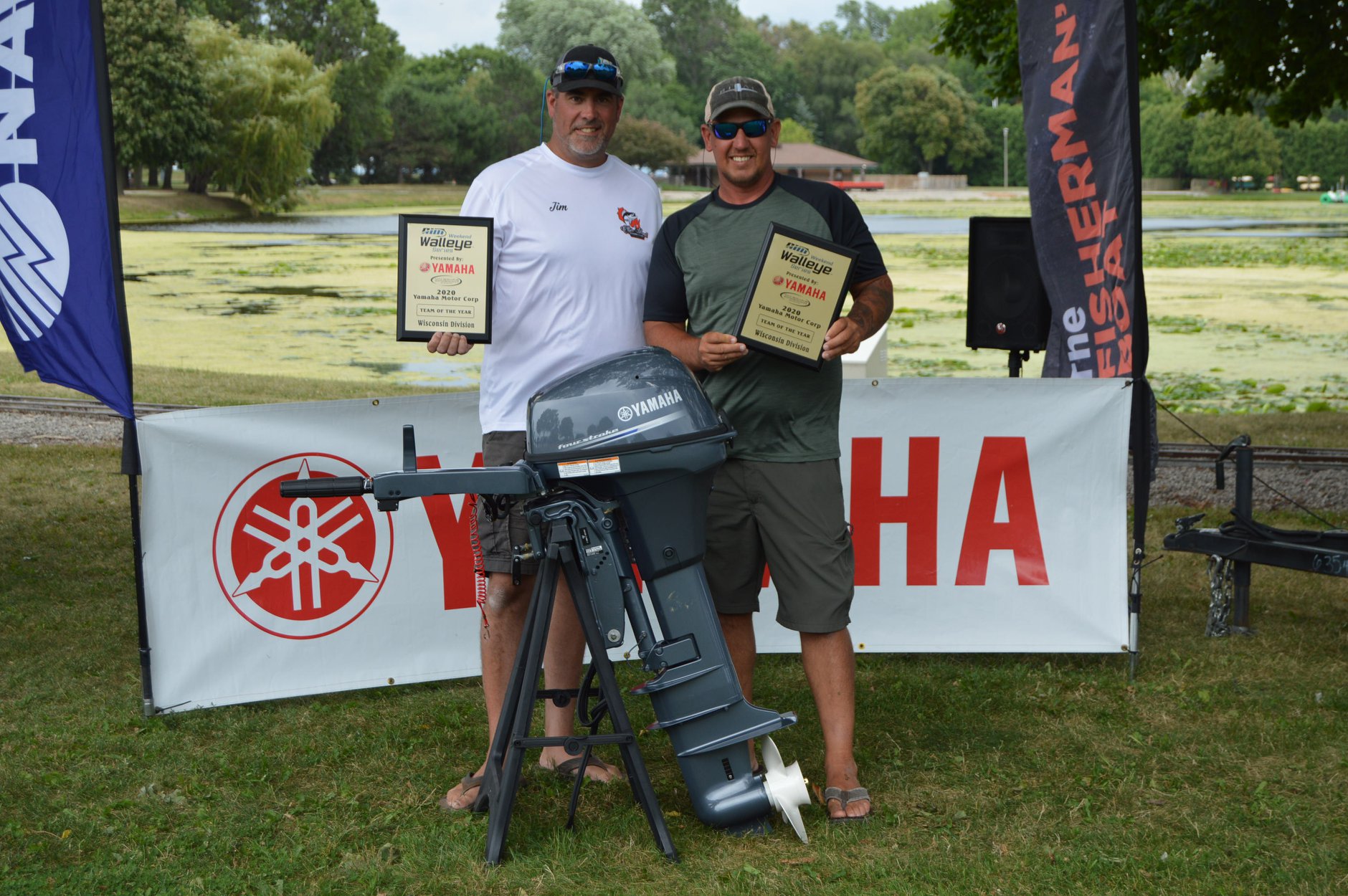 To win the most coveted title in any fishing tournament series, you need to be consistently good, and  the team of Jim Erdman and Jeremy Hurst proved they were, taking 17th in the AIM Weekend Walleye Series/Garmin/Berkley Wisconsin state championship Aug. 22 and 22, and locking in 2020 Team Of The Year (TOY) honors in one of the most challenging seasons ever.

“These two did well at every event in every imaginable circumstance and proved that they deserved the honor of AIM Weekend Walleye Series Wisconsin Team Of The Year,” said Denny Fox, AIM national tournament director. “Congrats to them for winning, taking home that smooth-running Yamaha 9.9 kicker worth a cool $4,000, and earning a berth in the AIM National Championship Shootout, at a water body to be named later. And you can bet that with the attitude they’ve got, they’ll be in the running again for TOY and a threat at every tournament in 2021.”

Running a Mercury 300 Verado-powered platform, Erdman and Hurst, both from Oshkosh, won one tournament, and finished consistently in the others to take the title despite a strong finish by the second-place team of up-and-comers Isaac Lakich and Tristan Beckwith. Erdman gave some advice for what it takes to take the TOY crown.

“It takes diversification. You need to be able to fish all styles and transition quickly and adapt fast, and fish any conditions anywhere, any time and do it all with a steady hand. You just grind through it all. It’s more of a mental game than anything,” he said.

This was Erdman’s first season in a while with AIM.

“We signed up this year as partners and when events started getting canceled,” he said, it was worrisome to say the least. But AIM, like any good angler, waited patiently until things opened back up, scheduling multiple back-to-back tournaments to make up for lost time. They took the points lead at the Green Bay events in Oconto and stayed there.

“The first tournament out of Winneconne we were fishing the bull rush beds and did well. We got a 14th. The second event there we didn’t do so well. Our fish were kinda small,” Erdman recalled. “We then moved on to the Bay of Green Bay,” and another back-to-back. They headed south out of Oconto and won the first event with nearly 43 pounds for five fish, even after a storm delay.

“We worked through five or six different spots, and tournament day didn’t have a fish until 10 a.m. and when the wind laid down we just went to work and got on the food line.” They used crawler harnesses, and even took first in AIM’s new side pot, raking in another $1,300.

“We feel like we lost the winning fish. I was looking at it. I was leaning over the motor and it gave one head shake and it was gone. We kinda giggled at it, and figured it was just not meant to be. The winners thanked us for loosing that fish,” Erdman laughed.

Then came Lake Winnebago and the championship.

“We knew it was going to be really tough. We pre-fished for three days and knew there was a bite up river. We also knew we had a pretty solid lead in points but were concerned about the teams in second and third, and we said, let’s just play it safe. We pounded rocks and were running and gunning for five days prior. We stayed on it. We didn’t have big fish pre-fishing, and had 8.41 pounds on Day One, and just under five pounds on Day Two. We pitched Shiver Minnows solid for two days. And it got us enough to maintain our points lead,” Erdman said.

After fishing other tournaments for years, he said he’s switching to AIM. “I think you guys run a class act event, and you pioneered C-R-R (AIM’s now-often copied Catch-Record-Release™ format) which is a big deal to me. You’ve got it figured out. The way you transitioned this year to virtual meetings was terrific. It just worked. You were one of the few series that held events. We just believe in you and how you run tournaments, run for anglers by anglers.”

That TOY title also means a spot at the National Championship. “You’ll see us there regardless of where. We’re looking forward to it.”

Okay, Fan Nation. Two down, one to go.  If you can’t be there in person, be with AIM this weekend at Lake of the Woods in Baudette, MN for all the on-water action starting this Friday, at the Minnesota championship Aug. 28-29.

Like in North Dakota and Wisconsin, Team Of The Year honors and that Yamaha kicker also will be at stake. Watch for day-of updates both days, posted at AIM’s Facebook page. Details on all AIM tournaments are at the AIM website, and watch for posting announcements on the 2021 season there, and at the Facebook page.

AIM WalleyeTournament Winnerswalleye fishingWalleye Tournament
« Jacobs, Landsiedel Capture AIM NoDak Team Of The Year, Earning A Yamaha Kicker And That Championship Berth
It Ain’t Over ‘Til It Is: Nittis Not Only Take Minnesota Championship, But Also Yamaha Team Of The Year »