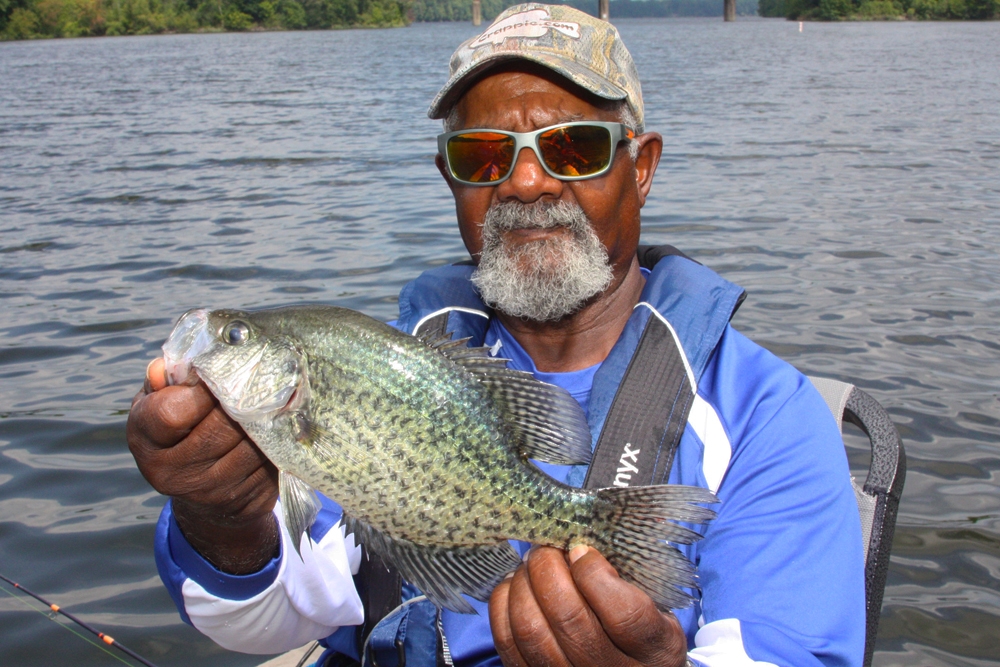 Ken Smith of Sharon, Pennsylvania, is a crappie fishing machine.

I first met Ken 14 years ago in January on the ice at Pymatuning Lake while I was shooting photos for an article. He was the only person in a group of about dozen anglers who had crappies laying on the ice.

It would be two years before I ran into him again. This time during mid-summer in the parking lot of a boat launch on Shenango Lake; both of us were securing our boats to head down the highway.

“It was a tough day for me,” I remarked. Then I asked how he had done. He opened a livewell lid revealing that it was filled with crappies. 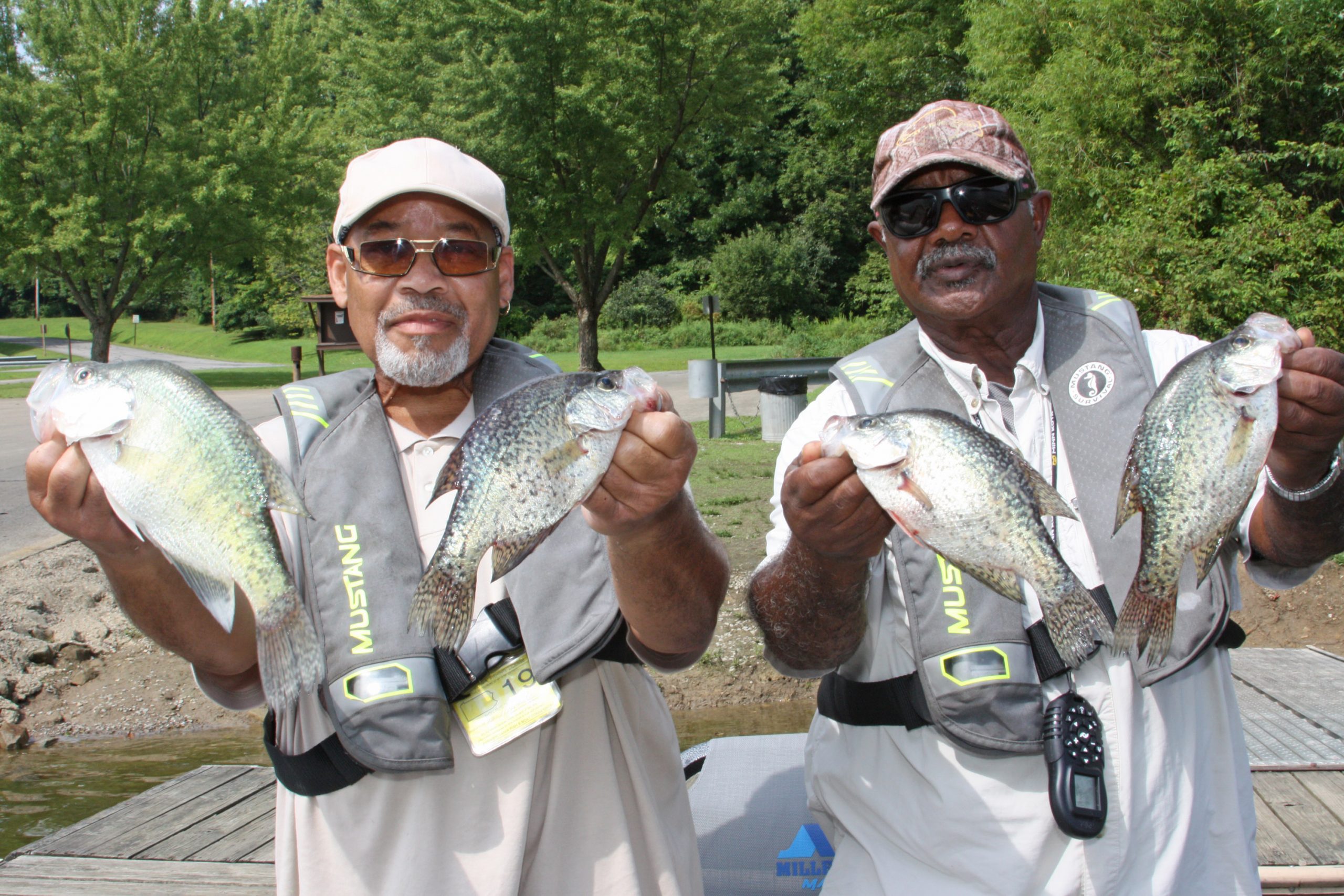 “What’s your secret?” I asked jovially.

“Persistence and hard work,” he said. “Come out sometime with me, and I’ll show you how I do it.”

I took him up on the offer two weeks later, and at least twice every year since. It’s been an education. Spending time in a boat with Ken is like attending graduate school in crappie fishing with the instructor being one of the top professors in the business.

When he was quite young, Ken explained he would ride his bike to a large pond several miles from his home to fish for bluegills with pieces of worm. Mr. Scarboro, an elderly gentleman who regularly fished the pond, showed him how to catch the mysterious calico fish observed in the pond. That was Ken’s introduction to crappie fishing. 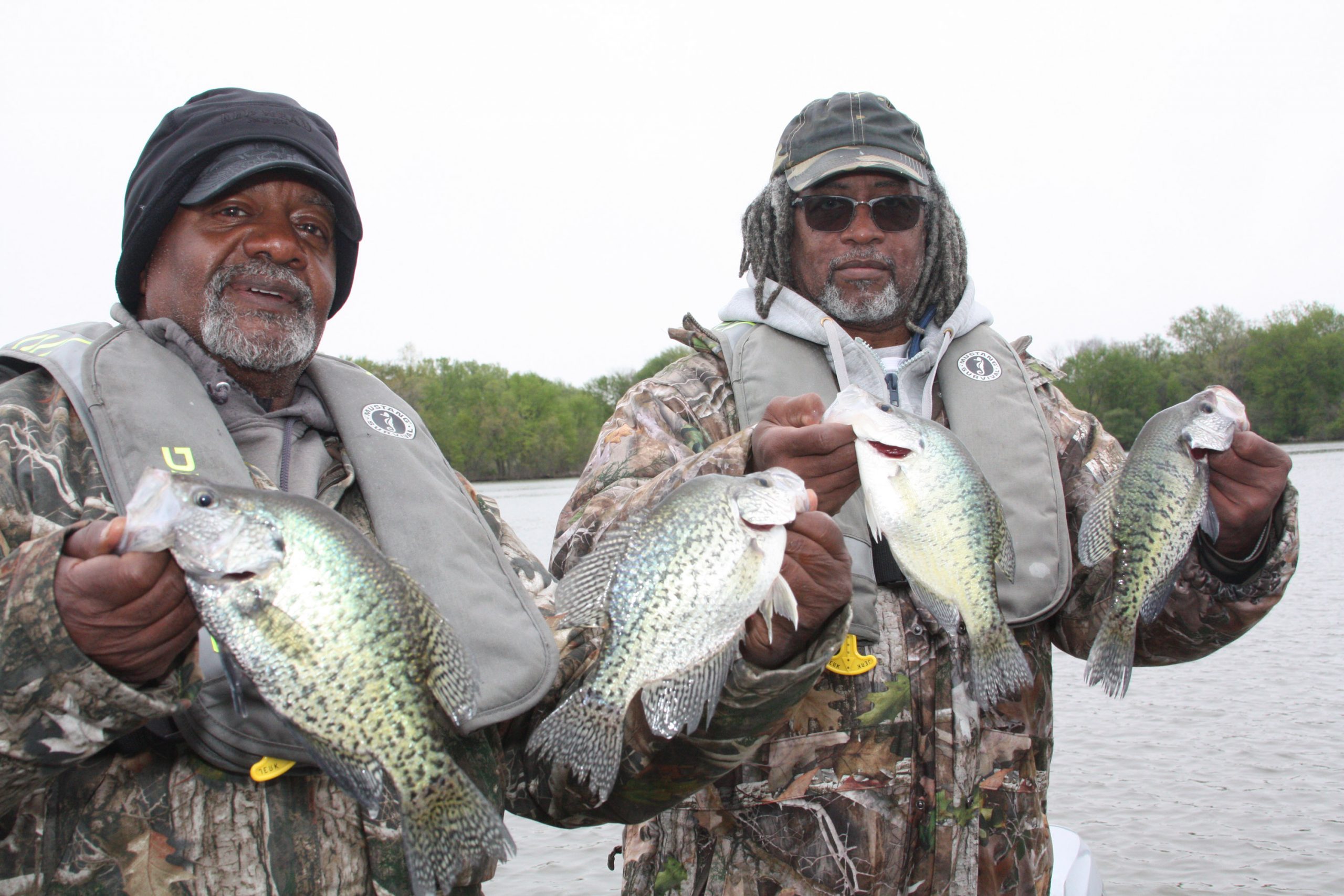 Later his eldest brother Paul Johnson started taking him fishing to Shenango Lake and Pymatuning. When old enough to drive, Ken and another brother Darrell went together to buy their first boat. That’s when his interest in crappie fishing really took hold. In 1988, Ken made his first springtime trip to Kentucky Lake in Tennessee. The annual two-week April pilgrimage continued for 32 years.

Rapid Fire Round with Ken Smith

What is about crappie fishing that attracts you?

I don’t need to catch 25, 50 or 100 fish a day. It’s not about how many I catch. It’s about the chase. I like to find them and figure out the best way to catch them – especially when they don’t want to bite.

What is your favorite fishing technique during the Spring? Summer? Fall?

In the spring I’ll be working a 1/32-ounce jig – either hair or soft plastic body – under a Thill 3/4-inch oval-shorty Premium Weighted Float. When crappies go deep in the summer, I’ll be hang-gliding. Hang-gliding is a special multiple rod vertical presentation I developed to fish deeper water at a slow troll. Come fall, I typically go back to jig and bobber when crappies move to shallower cover, then I go to hang-gliding when the fish move to the ledges and channel drops.

What are your two favorite crappie baits?

Without a doubt, my favorite is the Bobby Garland Baby Shad whether I’m fishing a jig and bobber, or hang-gliding. I guess a Bobby Garland Itty Bit Swimmer would be my second most used bait; I use the Itty Bit in the summer when the bite gets tough due to the abundance of small minnow fry and bluegill.

What are your favorite colors in soft plastic bodies?

For fairly clear water I would say Bobby Garland Glacier in whatever body style I choose. For dingy water, I break out the Bayou Booger and Purple Mist. However, I carry lots of colors and switch colors often, even when crappies are biting whatever I have on. I’ve learned that sometimes a subtle change in color can generate more hits. That’s how one learns what works and what does not. One color I’ve never had success with is pink; I no longer use any plastic that has pink in the body or tail. 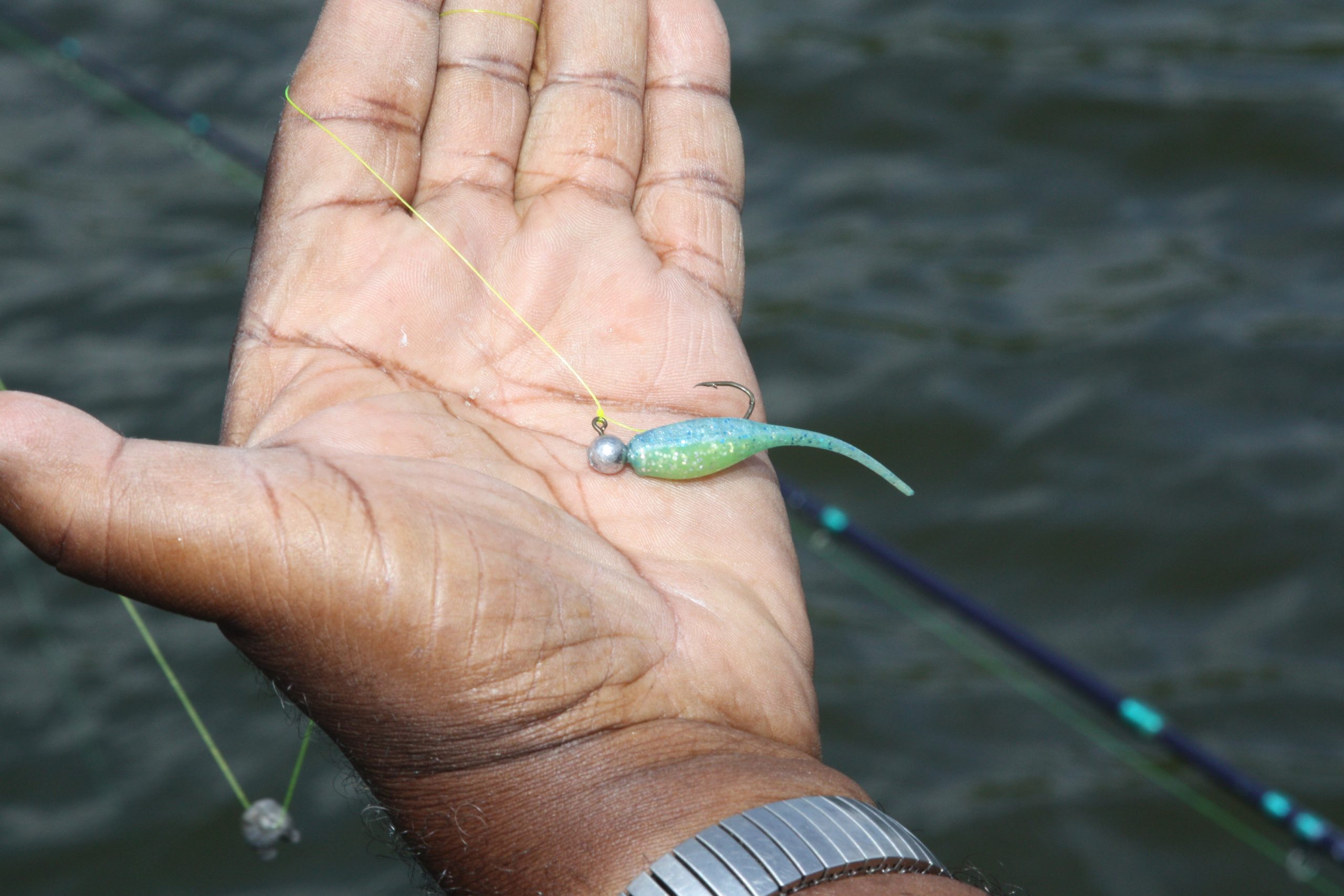 Most crappie anglers I know always have minnows with them. I know you never use live bait. Why?

It’s a confidence thing. I have confidence is being able to outsmart crappies without the use of live bait. Remember, I’m in it for the chase. Location and presentation. That’s one reason I change colors often. I do use scent on my plastic.

The B’n’M 7.5-foot Roger Williams model is what I use for jig and bobber. The B’n’M 10-foot BGJP is my hang-gliding rod. Pflueger President spinning reels are on most of my rods.

For years I used 6-pound Stren. More recently I’ve been using 6-pound Gamma Optic Yellow Panfish. Definitely prefer a hi-vis line. I experimented with 2-pound Gamma last season; it performed well and I didn’t break off fish. However, I found myself retying the thin diameter test too often due to smallest abrasions from snags. 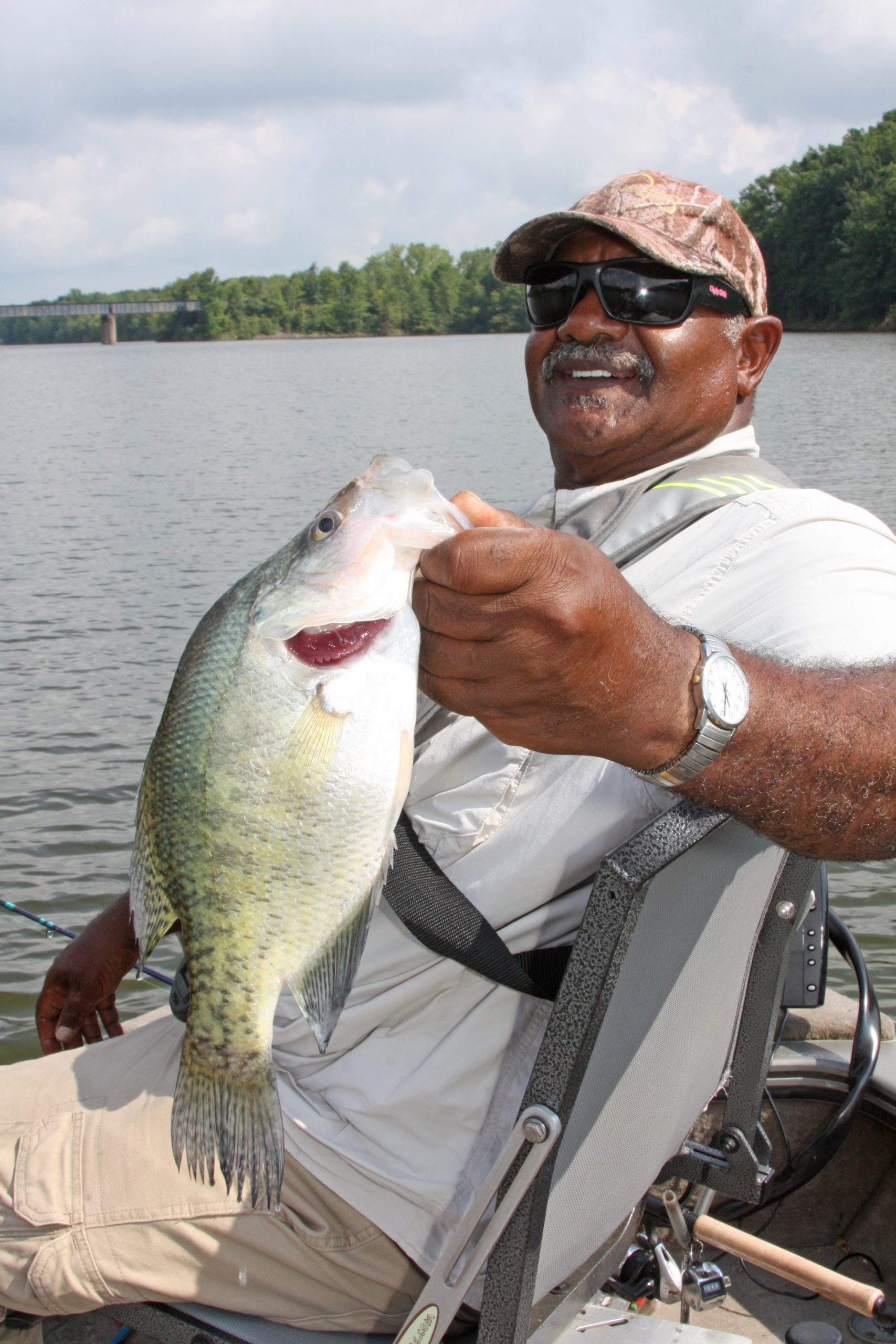 Shenango Lake is easily number one local water with me. This lake has an incredible number of crappies – both black and white. I think it’s the best crappie lake in the state – but it’s not an easy lake to fish. Number two would be Mosquito Lake in Ohio. Third would be Pymatuning Lake which for me is about a 45-minute drive. But the crappie fishing pressure on Pymatuning is incredible during the spring and I’ve seen my success rate drop up there in recent years, so I don’t fish it as often as I used to. Of course, my favorite lake of all is Kentucky Lake (in Tennessee). I catch plenty of big fish when I’m down there for a couple weeks, including good numbers of two-pounders.

A 3.02-pound White Crappie and 3.02-pound Black Crappie – both from Kentucky Lake in the same week!

Difference between locations for black and white crappies?

I’ve tried them all, but I keep coming back to Humminbird. I’ve tried (Garmin) LiveScope, but I don’t care for it. Not saying it doesn’t work for some people, but I’m just not into live scanning sonar. I can catch all the fish I desire without it. I use two views on my big Humminbird screen. I put mapping on one side of the screen to get on the deep brush piles and ledges I’ve found over the years, and traditional sonar on the other side so I can see if anyone is home down there.

If you weren’t so devoted to crappies, what would you be chasing?

(Darl Black began his career as an outdoor writer over 50 years on a on a long-forgotten communications instrument – a typewriter. Since then, his columns, articles, and photos have appeared in dozens of regional and national fishing related publications.)