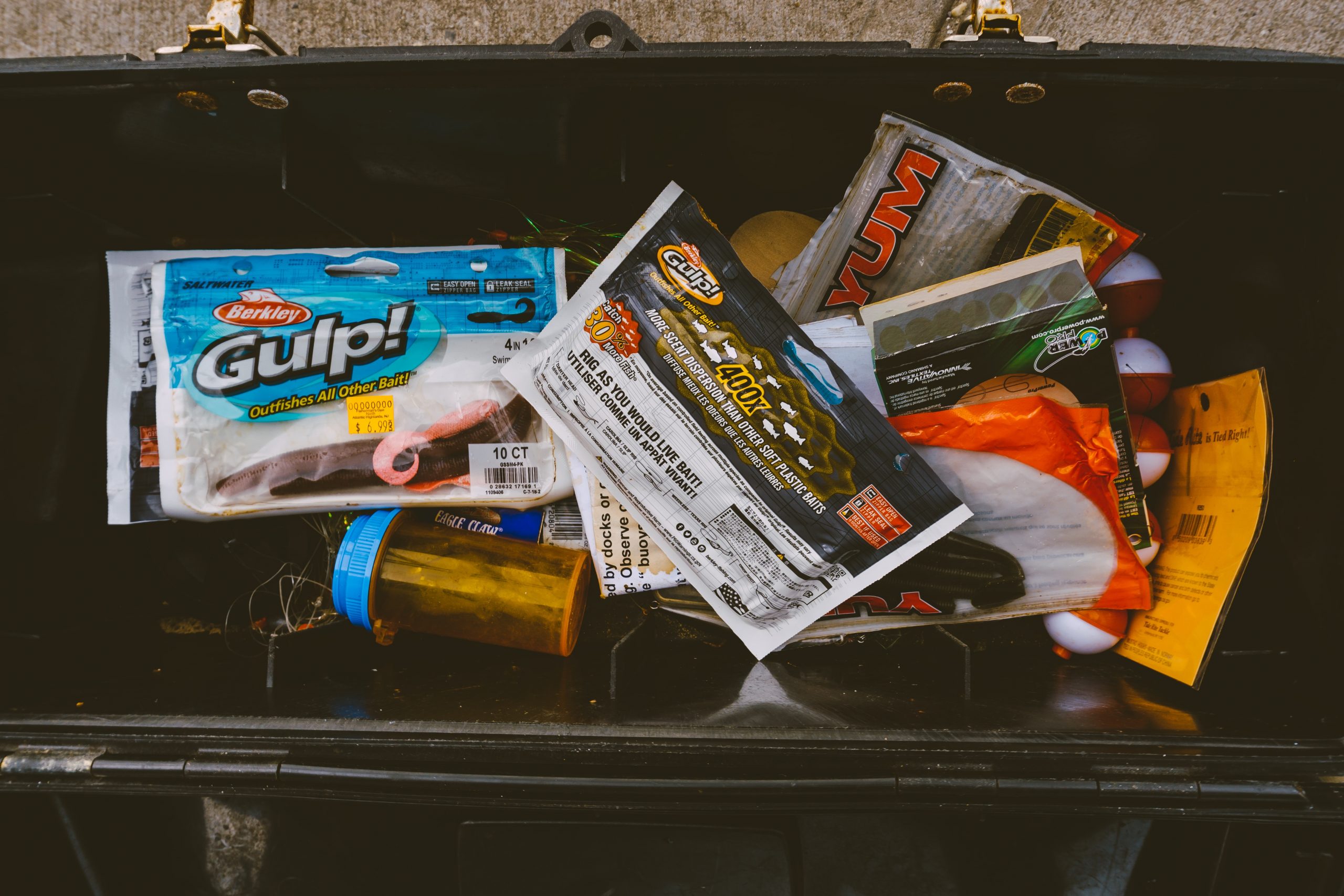 Lara Ewen from Marketing Dive wrote a recent article about what is selling in the Covid-19 pandemic now that everyone has stocked up on essentials.  The article cites alcohol, firearms, sporting goods, home office, and pet supplies as all being categories that were up in April.  “What we’ve seen starting March 20th is a move from a ‘stock up’ position to whatever the next trend is,” said Andy Mantis, chief business officer at 1010reveal, which is part of 1010data, a provider of data and analytical intelligence. “But outside of what people are stocking up on, like staples, almost every category is down by as much as 70% or 80%.” 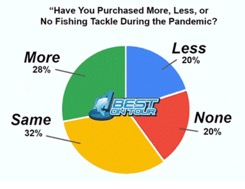 So what specific trends did retailers and manufacturers see in the fishing industry during April as nearly all parts of the country have been under some form of shelter in place. Retailers that sold essential categories like guns, ammo or food have been able to remain open even in the areas with the strictest guidelines.  Sales in those categories along with fishing tackle have been up in many cases which has helped offset store wide decreases in all other departments.   Navigating thru conditions and guidelines never seen before has been challenging for all businesses, some have evolved daily to find ways to support, maintain or even grow their businesses during this period.  Many have now been operating in a similar format for several weeks and have found their operational stride.  This poll from Best on Tour in March surveyed anglers’ thoughts about their purchase choices during the pandemic.

As you can see 60% of anglers in that poll thought they would purchase the same amount of tackle or more tackle during the pandemic.  So, after several weeks what trends have emerged as retailers adjusted their operations and anglers have adjusted their fishing and purchasing habits.

Retailers with an online presence have really benefitted during this time as they could shift all their energy to support ecom sales.  For nearly all, online sales have continued to be strong and have been a lifeline for many retailers and manufacturers that had to close all other parts of their operations.  Some retailers and manufacturers have seen 50%-100%+ increases in their ecommerce business during the end of March and April.  Creative retailers have also begun to offer curbside pick up to allow customers to get their favorite items without having to enter the store.  Curbside pick-up has been particularly popular with rod sales as customers could research online and then provide the retailer with a specific model number which is much easier to pull than a long list of lures or terminal items.  Denali Rods has seen some of their retailers with curbside service continue to see good rod sales.   Some top online retailers are having to limit promotions in order to not create too many sales on a given day as they are currently operating with smaller staffs.  Many of these same leading online retailers are even running up to 10 days behind on shipping online orders.

Going back to the basics.  Many retailers have seen a wave of sales in entry level fishing equipment including starter rod and reel combos.  Many families that are not able to enjoy other outdoor activities during social distancing are trying fishing for the first time with their families.  It has also seen a return to fishing for people that may not have done it in a long time.  The timing of the new social distancing along with the arrival of nice weather and peak fishing season across the country has been a great combination to get people outside fishing.  These new anglers are snapping up entry level combos and starter kits, so they can hit the water quickly with all they need.  This trend has also surged sales on terminal items like hooks, bobbers and fishing line.  Sales for lead products like sinkers and weights have also seen increases.  To complete their needs anglers are loading up on live bait.  Many bait sellers and wholesalers are reporting bait sales at levels they had not seen since the 1990s.  Worms, crickets and minnows have all been in short supply and selling as fast as they are being stocked across the country.  Some retailers would post the arrival of live bait on their social media sites and sell out minutes later.  Even diehard tournament anglers have switched their purchasing habits during the past weeks.  Instead of practicing for a tournament many have turned to crappie fishing for increased action and a chance to have a dinner of fresh fish.  That has seen them buying more jigheads and panfish plastics over their traditional bass purchases.  Companies like Big Bite Baits have seen a tremendous surge in the sales of crappie baits and crappie jigheads.  Keeping those panfish categories in stock the past few weeks has been particularly challenging with demand swelling.

Some tournaments have started to resume bringing a focus back to bass fishing tackle.  Other tournament trails have switched to digital, catch and release or online tournaments to allow people to continue to compete which in turn continues to drive bass tackle sales despite the restrictions on large gatherings.  Soft plastics have continued to be a very popular bass category during this period.  Fluorocarbon sales for companies like Sunline have continued to grow during the period with many customers now buying their line from retailers via their ecommerce websites.

Offshore anglers are also taking advantage of the much lower gas prices to take long trips offshore where they are able.  Sales of bait like ballyhoo for those offshore trips and filling reels with line have started to rise in coastal areas that are opening back up.  The other saltwater category that is seeing an increase is surf fishing.  Sales of rigs, sand spikes and tape measures have increased by 50% in many accounts.  Customers are coming in and saying, “what do I need to fish off the beach?”  Many places have restrictions on their beaches, but are allowing fishing.

While sales for bait, tackle, rod/reels and lures have remained a bright spot for retailers, clothing sales have been significantly impacted during the pandemic.  Online sales of top clothing brands like AFTCO has been one of the lone bright spots for retailers in the clothing category.  Once government agencies started to recommend face shields sales of those products went thru the roof.  Demand for facemasks is even brining non-fishing customers into many stores for the first time just to shop for facemasks.  Smart retailers have made impromptu walls and displays with just facemasks to cater specifically to this new surge in demand.  Brands have seen facemask demand flood to never expected levels in the past three weeks.  Brands with good sourcing and reliable manufacturing have been able to pivot and secure large facemask inventory. Companies like AFTCO have even developed new programs to supply their customers with facemasks while donating free ones to community organizations.

Many retailers have been extremely cautious with inventory and reorders. With some areas now starting to open more businesses and allowing more activities, many retailers have started to place orders to replenish empty pegs from the past few weeks.  SPRO was closed for two weeks to comply with local guidelines and when they returned they had a large numbers of orders waiting to ship, pushing their shipping lead time out to 7-10 days as they operated under new CDC guidelines and reduced staffing policies.  Gamakatsu USA was closed for over a month and has now returned to limited operations and experienced a similar backlog of orders to catch up on. Distributors have remained extremely busy during this period as they fill a wide range of rush orders for retailers across the country.  Some brands have had supply changes impacted and are experiencing product shortages, but others with their own manufacturing or reliable supply changes are picking up extra demand.  Some retailers are also ordering optimistically to support the increased demand they are expecting in the next couple weeks as we enter prime fishing and selling season in the country ahead of Father’s Day.  The arrival of stimulus checks has provided a boost on some higher end purchases as anglers coming in and stimulate the economy with their recently received funds.

BusinessCOVID-19Fishing IndustryIndustry News
« Rapala Releases New Rap-V Blade: The Most Versatile Fishing Lure Ever
She Fishes Through It »