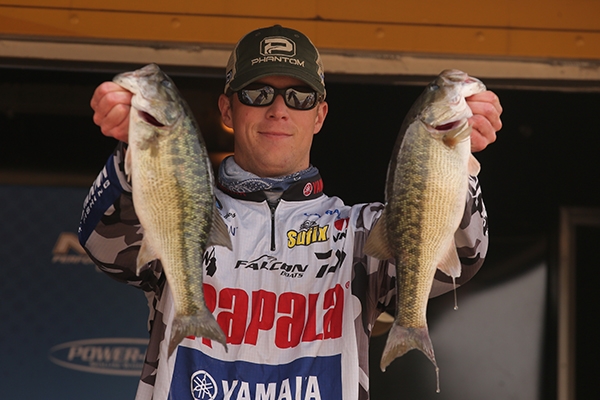 If it’s summer, don’t look for Patrick Walters to be fishing anywhere on the main body of a lake. Instead, you’ll find the Yamaha Pro far upriver where he can work moving water.

“Moving water is normally cooler, has more oxygen and baitfish, and overall, I think it’s easier to locate and pattern bass during the summer months because of how current positions fish,” says Walters, 24, a rookie in this year’s Bassmaster® Elite Series but a veteran angler in all other respects. His resume already includes 4th and 7th place finishes in Elite® Series events this season, and a victory in the 2018 Bassmaster®Central Open on the Red River. As a member of the University of South Carolina bass fishing team, he fished throughout much of the United States, and won the 2017 Bassmaster® Southern Conference Regional tournament.

“From June through September, the warmer the water temperature, the more bass spread out,” he explains. “The fish move to isolated pieces of cover that usually makes them really tough to find in a lake, but in a river they’re more confined. Literally, you can fish banks or shallow mid-river shoals and catch them.”

When he’s fishing a river shoreline, the first things Walters concentrates on are places where tree branches extend over the water, fallen limbs and logs, and even larger rocks and boulders. It’s not only the specific cover that’s important, but also the shade that cover provides. These types of places are especially important during the mid-day hours when the sun is brightest.

“If the river is particularly shallow, any mid-river structures like rocks or bridge pilings that break the current flow and create small eddies can also be good fishing spots,” continues the Yamaha Pro. “They provide shade as well as excellent ambush spots. Bass will rest behind the cover but still be able to see and grab any food being washed past them.”

Walters also aims some of his casts into small creek mouths and ditches where water may be flowing into the river. These also provide breaks from the main river current, and may be slightly deeper. Again, he’s thinking of places where bass can stay without burning energy fighting the constant flow of the water.

“Fish in these types of rivers tend to be more aggressive, so I use moving baits as much as I can,” adds the South Carolina angler. “Buzz baits and square bill crankbaits are my favorites, but that doesn’t mean I won’t drag a light jig around, too.

“I cast upstream so my lure comes downstream and looks more natural. I can still bounce a crankbait off rocks or hop and swim a jig the way I do in calm water but nothing would look natural if I retrieved them upstream against the current. Fishing this way also allows me to guide and position the lures better, too.”

While fishing river current can be productive, Walters cautions anglers to be aware of possible falling water levels. If the water level is falling, it means navigating over previously submerged rocks and stumps may become more dangerous or even impossible. At the same time, however, bass in falling water often become even easier to pinpoint, since they’ll frequently move to those eddies still being created by the mid-river cover.

Walters learned this lesson the hard way during the 2017 Bassmaster® Open on Tennessee’s Douglas Lake. He was still in college but had fished well enough to qualify for the Bassmaster® Elite Series if he finished well.
“I found a lot of bass up the river during practice,” remembers the Yamaha Pro, “but I could see the water level was dropping and by the time the tournament started I couldn’t get to them because the water was too shallow. I finished 53rd and missed qualifying for the Elites® by just two points.

“In retrospect, it was probably for the best, because I was able to finish my classes and graduate in December of 2017. When B.A.S.S.® scheduled another Open on Douglas at the very same time in 2018, I knew exactly where the fish would be. I even held the tournament lead after the second day, but once again the water was falling and I finished second because I couldn’t reach my best spot the final day.

“That’s what fishing moving water can be like during the summer.”