FAIRVIEW, Pa. [January 15, 2019] – FishUSA®, America’s Tackle Shop®, is proud to welcome Gene Jensen to its Pro Staff. Jensen will join fellow bass and kayak angler, Chad Hoover, and Great Lakes open water anglers Pete Alex, Tony Roach, and Ross Robertson, as the newest spokesperson and collaborator on the dynamic team. Also known by his wildly popular moniker, Flukemaster, Gene has amassed an extensive following through his work as an instructive member of the angling community. 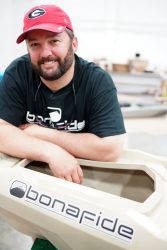 A born and bred Georgia native, Jensen grew up trout fishing with his father. He was later introduced to the world of bass fishing and today he can be described as an avid bass angler; which he also considers to be a huge understatement. He guided on Richmond Mill Lake in North Carolina for five years and it was there that he learned he loved to teach people how to fish. Now residing in northwest Georgia, Gene’s home lakes are Guntersville and Lake Chickamauga. It is here that Gene can often be found chasing trophy largemouth while simultaneously mentoring others and producing a variety of digital media assets. 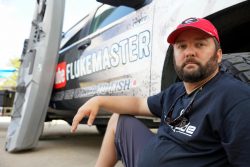 Today, Gene owns and operates multiple social media channels, including his YouTube channel, Flukemaster. He has amassed a following of nearly 300,000 subscribers; a number that grows every day. Through social media, Gene shares his passion for bass fishing while educating others in the sport. He lives by the motto, “Teaching the World to Fish.” He says, “My calling in life is teaching people how to fish. Bass fishing is my passion but I am willing to teach anything that I learn about any species of fish.”.

Gene brings his extensive bass and kayak fishing background to FishUSA as the retailer continues to expand its selection of gear and accessories to better serve this fast-growing segment of the fishing community. Recent product line expansions from brands such as 13 Fishing, Bending Branches, Bonafide Kayaks, NRS, Seaguar, YakAttack, and more, continue to build upon FishUSA’s strong selection and further enhance the one-stop online tackle shop experience for all anglers.

The Flukemaster’s contributions to the fishing community were widely known to the FishUSA team before the partnership was reached.

“Gene is a true authority in kayak bass fishing and he fits perfectly with FishUSA’s ongoing expansion in kayak fishing. We are thrilled to have him on our team,” states Jeff Parnell, the company’s President and CEO.

FishUSA Kayak Fishing Specialist, Brandon Ryan, added “Gene has such an extensive background and history with bass fishing. I’ve been watching his videos for years and he’s definitely helped me grow as an angler. I’m excited to work with him and help introduce his followers to FishUSA. We’re all looking forward to working with him and it’s a perfect match for both of us.”

FishUSA, America’s Tackle Shop, caters to anglers nationally and internationally with products for the spectrum of species and fishing techniques. Launched in 2000, the company’s website, www.FishUSA.com, includes tens of thousands of SKUs and is operated by FishUSA, Inc., a privately-held company based in Fairview, Pa. The company also operates a full-service pro shop in Fairview providing anglers with access to the company’s entire product line.