For Chris and Trait Zaldain, Bass Fishing is a Family Affair 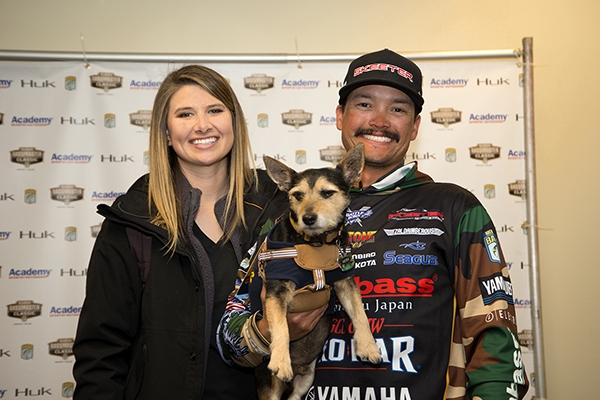 “That’s our goal,” explains Chris Zaldain, who married Trait in 2015, after meeting her on the boat dock at Table Rock Lake during a tournament. “We both love the sport of bass fishing, and together as a team we accomplish things we could not do separately.”

“We’re completely in synch with each other’s tournament needs, even though we’re competing in totally different events on different lakes,” adds Trait, whose father introduced her to fishing about the same time she was learning to walk. “I’ll be fishing in eight Opens this year, and Chris will be at each of them with me, and likewise, I’ll be at each of the Elites with him. Unfortunately, tournament rules do not allow us to practice together, but we can still work together toward the same goals.”

Zaldain, who had three runner-up finishes during the 2019 Elite season, admits Trait’s presence at those roller coaster events provided a major calming influence for him, especially after the Yamaha Pro hooked but lost the winning fish three times in one day during one of those events.

“You cannot imagine the highs and lows you go through when you come so close to winning on multiple occasions,” he explains. “Trait feels my frustrations just like I do, but together it’s much easier to get through them. Even during the off-season, she’s right there helping me. While I’m rigging my new boat, Trait is at her desk taking care of paperwork and sponsorship requests.”

A native of San Jose, Calif., where he learned to fish both big swimbaits as well as finesse-style soft plastics, Zaldain qualified for the Elite Series through the Bassmaster Opens during the 2011 season. He began his professional career fishing Bassmaster Opens in 2004, so he understands the challenges Trait is facing in this, her second season of fulltime competition.

“My favorite type of fishing is power fishing with smaller finesse lures,” smiles Trait, “and Chris can do that as well as anyone. He has so much advice to offer from his experiences, and he’s definitely helped make me a better angler. I have to do things myself to really learn what I’m doing, but having him as my mentor, as well as my husband, has certainly been nice.”

Trait grew up in the Fort Worth area where her father was president of the Cowtown 100, one of the largest bass clubs in the area. After graduating from Southern Methodist University in Dallas and working in the financial field for two years, her father took her to Toledo Bend for her first formal bass competition, the 2011 Texas State Bass Tournament. He let her choose the areas to fish and lures to use, and after Trait finished fourth, she resigned her job to become a tournament fisherwoman.

“Chris happened to see me weighing in fish during an online broadcast of one of my tournaments and sent me a message introducing himself, but I ignored it,” Trait laughs. “At that time, my sole focus was fishing. Finally, he came all the way from California and we met there on the dock at Table Rock. We began dating a year or so later, and Chris started fishing the Opens, too, while we were dating, but then stopped fishing them after we were married.”

Early in her fishing career, sponsors became attracted to her, and today some of those same sponsors have added Chris, as well, while some of his have added Trait. They have recognized the value of their exposure in both the Elites and Opens, as well as the uniqueness of their careers.

“Chris calls us a 1-2 punch,” laughs the female half of this Yamaha Pro team, “and I call us a well-oiled machine. Anything he needs that I can do, I do for him, and he does the same for me. I think it’s a pretty neat combination.”