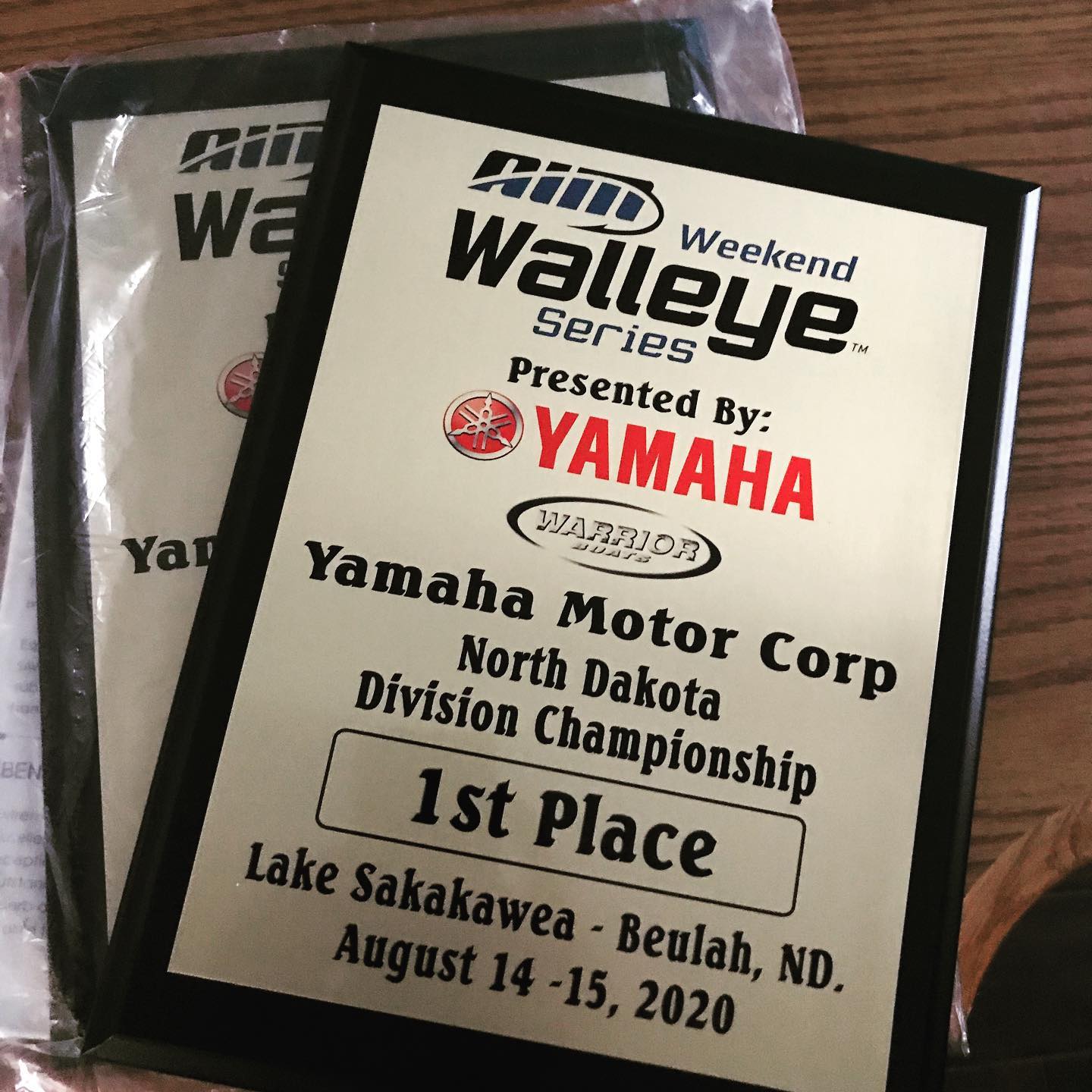 Leading from start to finish, the husband-wife team of Daren and Heide Schneider slogged through waves approaching five feet to take the AIM Weekend Walleye Series/Yamaha Motor Corp. North Dakota state championship on Lake Sakakawea Aug. 14-15, earning them $7,500, the potential for more incentive cash from AIM sponsor Garmin, and a berth in the 2021 National Championship Shootout.

“Team Schneider led by a little the first day and by a lot the second, using Berkley Flicker Minnows throughout in Van Hook Arm,” said Denny Fox, AIM national tournament director. “What a testament to sticking it out with a great lure, great electronics and a program they knew worked, knowing what they had to do to secure that championship berth, and not getting first-place jitters after Day One. In fact, both first and second-place finishers used Flicker Minnows exclusively.”

The Schneiders, from Bismarck, found plenty of fish in mid-lake, but knew that 24 pounds a day wasn’t going to get a championship. That’s why they ran for it all, in their Mercury 350-Verado-powered, Garmin-equipped boat, and why they rode it all the way to the bank, Fox said.

“It’s been a whirlwind,” said Daren Schneider. “As we were sitting in the rain on Day One (there was a one-hour storm delay), we knew we had to make the run, or we’d regret it. We knew we had to take a top five to get an invite to the nationals and that was our goal. We swung for the fences. We only pre-fished the middle of the lake three days and came up with 21 to 24 pounds all three days,” he said. Not too shabby for the freezer, but with predictions of up to 70 pounds to win on the table, not enough.

“We’d gone up to the Arm the week previous and fished one day the week before and we caught better,” he said.

Leaving in the rain on Day One, the first seven miles, he said, were “terrible. But when we got to a point in the lake, it was like a light switch, and it was a wide-open run for the next 30 miles, and then the wind picked up again.” Total miles to Shell Creek Bay where they set up: 43.

Pulling planer boards and Flickers in sizes 11, 9, 5 and 7, they found the Number 7 the hot ticket for their 10 tournament fish.

“In the morning, the winds there were pretty decent with about a two-foot chop, cruising in only 9 to 11 feet, at times dredging the bottom, and at others with the Flickers a few feet off the bottom,” he said. Their best producing color: Prime Time.

“We picked up one about every 20 minutes for the first six, and the wind dropped, and it was over. We put 285 marks on the graph the first day to start patterning them. Bronze worked well also in the morning. After about an hour we changed baits and followed the marks. I think our first fish was a 17-1/2, and we said ‘well we’re not going to score it’ to build our confidence, then came a 21, a 19 and then I think a 25-1/2 which really boosted our confidence. Then back-to-back 24s, and a 26-3/4, and our last was a ¼-inch upgrade which was enough to put us in the lead on Day One,” Schneider continued. Then came jitters about the “first place curse.”

“We had made the comment ‘I don’t care where we’re sitting, I don’t want to be in the lead. You don’t want to have that target on your back” he said looking back. But, they were, and it was.

Day Two, and they were in mid-pack when they got the “go” sign. Winds were strong. No rain, but the waves made up for it, running between three-and four-footers.

“We made the decision that we had to go back up. It took well over an hour to get there. It was brutal. I’m still sore,” Schneider continued.

Back to the same location, they pulled Flickers again in a ¾-mile stretch near an island, it took only five minutes for a board to go back, but it was a pike. Another 10 minutes, the first walleye arrived. Then it was a good hour, but it was worth it when a 29-incher came to the net.

“That was awesome. The third, and that one was in the 22-inch range, came an hour later. We thought we had an even better chance. Then it just went dead,” he said. “You start questioning, following the fish, changing baits. Our primary color was Prime Time and we always kept one out the entire time, no matter what. Of the 15 we caught total, we got at least 10 on that color.”

The day’s fourth and fifth fish took another three hours, he said. “Number five came at about 12:30 and we decided about one, that enough was enough. It took another two hours to get in. It was brutal. Waves at that point were four-to five-footers and we knew it was time to go. We knew we had almost 30 pounds and wanted to take an easy ride back,” he added.

Then the last part of the ride however the weather eased. They fished another spot in mid-lake to see if they could pick up an upgrade, but it didn’t happen.

Going out with only a 1/10th-pound lead, he said, made them more than a bit nervous. “The other boats could have easily taken over first, so anything could have happened, but we felt confident that we gave it our all. When you walk outta there with nearly 60 pounds (their total: 59.51), no matter what, we were going to walk out with our heads held high. And I have to hand it to my wife, Heide. She killed it all season long. Seven years ago she’d never caught a fish and now she’s winning a state championship and going to the nationals. I’d put her up against any of the guys, no problem.”

Schneider also complemented the other competitors who also went up into the Arm near them on Day Two. “Hats off to them. They knew we were leading, and they were within 50 yards of us and always gave us our space which was really nice.”

In second place with 52.44 pounds and $4,000 richer are Matt Ristow and Kyle Hertz, both also from Bismarck. They too headed for Van Hook Arm, and at the end of Day One, were just 1/10th of a pound out of the lead in their Warrior 208. That Warrior second-place also means they’re eligible for a Warrior Cash incentive.

“On Day One we accomplished what we wanted, to set ourselves up for Day Two,” Ristow said. “We could have probably pulled in more but we left an hour early to give ourselves time to get back, re-rig and have everything ready for Day Two.”

“We were in the Arm, but nowhere near anybody, and I won’t tell you where,” he laughed. “We used only Number 11 custom-painted Flicker Minnows.

“We had everything so dialed in with those Flicker Minnows that they were eating them head first. There was no doubt about what they wanted. We had I think was a 26-3/4-incher in the first 10 minutes on Day One. We turned around and made another pass and caught a 24. We then ran to our other spot and picked up another 23 or 24-incher, then ran back to the first where we pulled a 25-1/2 within a few minutes,” Ristow said.

“We knew we had a good weight then and it was a long run back, and we also didn’t want to beat on the fish too much the first day so we said leave’em be. We might have hurt ourselves doing that, but we were fine with it. Quitting on a 25-1/2-inch fish was a pretty good thing to end on.”

Day Two found them back at the same first spot, after a “wild boat ride,” Ristow said. “It looked a little different. But there was still bait and fish. The water was pretty dirty and we made two passes and didn’t pick up a fish. We ran to our second spot and pulled our first fish in the matter of a minute.

“We turned around and came back into the wind and marked a big one and we both said, man, we hope that one comes up and hits, and sure enough, that was a 27-3/4-incher. We picked up three little ones and did lose another big fish but with the way the wind was blowing, trying to hold our line, if we got a fish we ended up being so far off we would have to start over. We then ran back to our first and the water was so dirty it was actually starting to collect on the line, and we said this wasn’t going to happen,” Ristow continued. So back to that second spot they went, and managed to upgrade, with the last a 22-incher.

“By the time we figured out we should have stayed there I said we’d better head back. The wind had been steady out of the northwest,” he said.

Besides the second-place finish, they also captured fourth place in the AIM Yamaha Motor Corp. Team of the Year standings, so they also sewed up an invitation to the 2021 AIM National Championship.

“It’ll be my third trip there, and my partner’s second,” Ristow added.

The other teams locking up invites to next year’s gathering are Lonnie Jacobs and Janine Landsiedel of Douglas. They finished third with 50.98 pounds and got a $2,000 check. They also took first place in the side pot for another $1,250.

Stay with AIM for previews of the other two state championships starting this Friday, with the Wisconsin championship on Lake Winnebago, followed by Minnesota on Lake of the Woods Aug. 28-29. Watch for day-of updates on both, posted at AIM’s Facebook page, along with who won the AIM North Dakota Yamaha Motor Corp. Team Of The Year in all three divisions. Details on all AIM tournaments are at the AIM website.