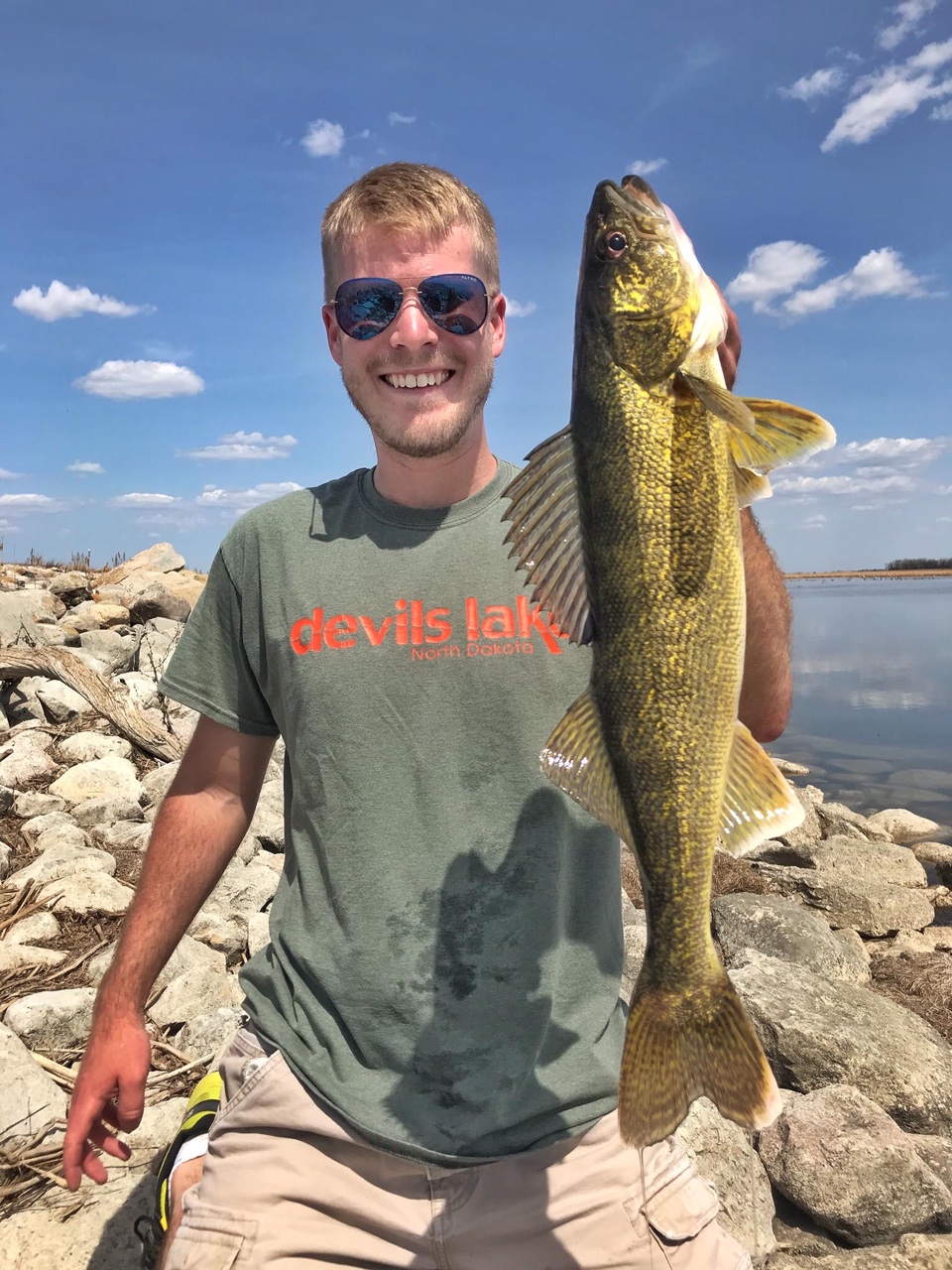 When the Devils Lake ice sheet eases away from shore sometime in the latter weeks of April, the rush is on.  Anglers drop everything and travel from everywhere to intercept walleyes and northern pike which have been doing the same program for centuries.

Pike and walleyes are hurrying upstream to perform their spring spawning rituals.  Fishermen are there to take a few of these for a fish dinner.  For decades, Devils Lake has provided a bounty for spring shoreline fishermen.

Despite 30 inches of ice this winter, the sun always wins.  Additionally, with a very wet fall and plenty of snow, predictions are for Devils Lake to rise two to three feet.  Clint DeVier, best described as a friend of the lake, guide, promoter and active in conservation circles said, “With the expected melt this spring, we will have plenty of water running this year.”

Tanner Cherney, the Devils Lake tourism outdoor media coordinator agreed saying, “Moving water really gets things going.  This year will be the best run-off in the past five years.”  DeVier narrowed his prediction to the April 10 to 20 timeframe and said, “That’s traditionally when the ice gives way and the culverts and bridges open.  It’s also when shore fishing is best.”

Walleyes and pike migrate, passing from one lake to another, always pushing upstream.  The many bridges under highways and county roads along with northerly-exposed rip rap shorelines provide plenty of ambush opportunities for anglers.

One of the popular spots is Channel A at the north end of Six Mile Bay.  Another is Mauve Coulee going into Pelican.  The tributaries (at least in spring) flowing into Dry, Alice and Irving Lakes and the 10 to 15 miles upstream current areas around bridges and coulees all produce.

Both guys agreed on presentations.  The best lures are the simplest at this special time.  Pike are notorious for hitting anything moving through the water column.  Male walleyes in the 14 to 20 inch range are the norm, with a few giant walleyes in the mix.  The big females are generally released to do their “thing.”

Cherney ties on a one-quarter ounce jig and adds a 4-inch Twister or Walleye Assassin plastic tail in orange or pink.  Another favorite color is fire tiger.  “Crankbaits don’t work as well since casts will be to deeper water, retrieving uphill to shoreline.  Snags eat cranks, so I use jigs and plastic,” he said.

DeVier said those targeting pike will cast spoons, but most prefer to use jigs and plastic tails, because he said, “Jigs catch pike and walleyes.  You never know what’s on the end of your line.”  His tackle box includes jigs and 4-inch Twister tails or PowerBait paddle tails in blue, white, pink or chartreuse.  “In dirtier water use the brightest color,” he added.  “It’s always amazed me how good the shore fishing is around here.  As I travel for tournaments, there is no place that has more shore fishing locations than right here in Devils Lake.”

One of the easiest jigs to use, according to Cherney is the Northland Mimic Minnow.  It’s already assembled, catches fish, not very costly and designed just for this purpose.  Devils Lake guide Cody Roswick agreed, saying, “The Mimic Minnow was designed for shallow fishing.  The pre-rigged jig/plastic lure casts well even in wind, is easy-to-use, swims perfectly in shallow water and flat-out catches fish.”  His favorites are one-quarter and three-eighths ounce Mimics in fire tiger, clown or pink and white UV colors.  “Find the warmest shallow water and use your Mimic Minnow as a search tool.  Nice thing, it’s almost weed and snag-proof,” he added.

From the first trickles of open water, ice-out occurs a few weeks later.  Boats are hauled out, batteries charged, Sea Foam added to fresh fuel, and launched at any of the first-class Devils lake ramps.  Most guides begin open-water trips about May 10 to 15, with the all-time favorite walleye “bite” being the two weeks prior to Memorial Day through June.  DeVier said afternoons are usually best because it takes several hours to warm the shallows.

“Fishing a foot to four feet of water with jigs or small Rapala Shad Raps is a matter of fan casting to locate walleyes.  Pike will be mixed in.  When these shallows hit 55 degrees, the fish really explode,” DeVier said.  Cherney runs two rods, one with a slip bobber and a leech (use leeches as soon as available, he emphasized), and keep casting.  When the cranks or jigs locate fish, toss the slip-bobber in that area.  “Most of these fish will be in less than three feet of water, which takes awhile for my out-of-state friends to understand,” Cherney said.

Devils Lake also offers big surprises in the form of white bass.  They usually start cooperating towards the end of May.  The white bass school – catch one and expect to catch dozens until the school moves.  Based on last season plus this winter, Cherney said jigs and plastic, Salmo Hornets and Northland Mimic Minnows are all that’s required.

Devils Lake guide services are featured on devilslakend.com, along with weekly fishing reports, lake info and conditions, details about the community, lodging, restaurants, casino and so much more.  Fishing is open year-round.  For Devils Lake questions, call and talk with a knowledgeable local resident at 701-662-4903.