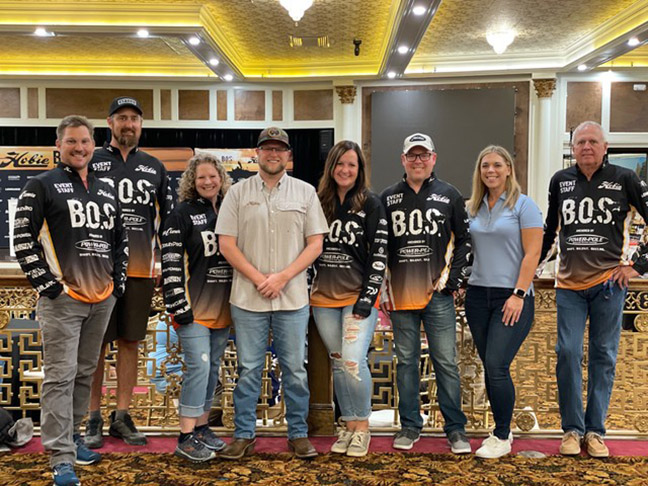 The Hobie Bass Open Series Tournament of Champions took place last weekend at Lake Caddo in Shreveport, LA. 50 of the best kayak anglers competed for a top prize of $45,000. With such high stakes, it was imperative that all of them were outfitted with the best gear on the market and Hobie Eyewear was on site to provide all 50 anglers with a pair of polarized sunglasses from their Floating Collection.

“As one of the sponsors of the Hobie Bass Open Series, it was great to be on hand for last week’s Tournament of Champions,” says Stephen Vaughan, Hobie Eyewear’s Senior Director of Product Development. “With weather being shaky all weekend, the anglers were eager to know what the best lens solution would be for them. Due to the cloudy skies and overcast conditions on the lake, it was no surprise that our Sightmaster™ Plus lens was their top choice. The fishermen were also very excited about our floating collection and shared stories about the more expensive glasses that they’ve lost overboard.” Hobie Eyewear’s Sightmaster™ Plus lens features a yellow tint with a gold mirror and was designed specifically for serious sight fishing. The Sightmaster™ Plus lens allows you to see the contrast between fish and rock below the surface of the water and is recommended for low-light, overcast conditions. See it in action here.

Reception amongst the anglers was extremely positive. “One thing that’s cool about the Hobie Monarch’s is that they can float, which a lot of us kayak anglers need, cause we lose a lot of stuff,” says Bailey Eigbrett, who qualified for the TOC by winning first place at the BOS tournament at Lake Eufaula, AL earlier this year. “They also feature side shields and a retainer, which are removable.” Seasoned kayak fishing tournament angler, Ron Champion had this to say. “My Hobie Bluefins have made a big difference. I’ve been able to see my bait clearly and see down into the water. These glasses are amazing!”