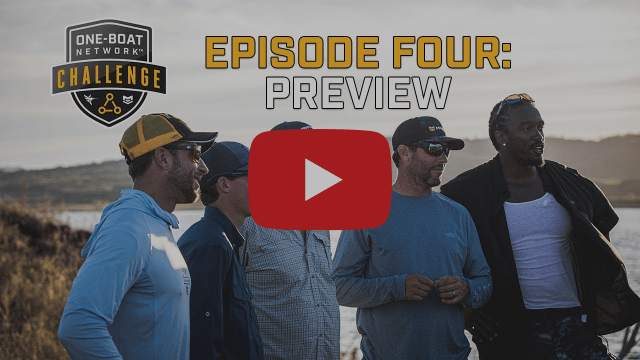 Humminbird® and Minn Kota® will release the fourth and final installment of the One-Boat Challenge web series on Thursday, April 9. In the series finale, the two remaining teams get a surprise when a bass fishing legend and another special guest show up to take them on in a battle of who can catch the single biggest fish in just 90 minutes. The winning team earns an advantage for the mother of all final challenges, a treasure hunt that takes them above and below Lake El Salto. Guided by a series of clues, the teams race to complete their tasks using all the technology available from the One-Boat Network™ along with their fishing skill to be declared the first ever One-Boat Challenge Champions. The team who completes the series of challenges first and finds the final clue will win the competition as well as $10,000 to split between the winning team’s charities.

In last week’s episode, the teams competed against each other using their AutoChart® Live map on their SOLIX® fish finder to catch the most fish within their assigned boundaries. Tyler Anderson and Mike Roy came in first place with 34 fish followed by Seth Funt and Charlie Breitenbach in second with a solid 24 fish. Willie Young and Louie Vito came up short with a total of 14 fish which resulted in their elimination.

The first three episodes are currently available to stream on OneBoatChallenge.com and Minn Kota’s YouTube channel. The fourth and final episode will air on Thursday, April 9. The series highlights the ups and downs of the competition as well as key features and benefits of the One-Boat Network.

Tune in on Thursday, April 9 to find out which team gets sent home and follow along with the series by tracking #ONEBOATCHALLENGE. The episodes can be viewed at www.OneBoatChallenge.com.