Humminbird® and Minn Kota® will air the third installment of the One-Boat Challenge web series on Thursday, April 2. In this episode, the host has gone missing but has left behind a note to alert the competitors of his whereabouts—a secret island that he’s been fishing on with professional bass angler Chris Zaldain. In order to get their fishing location for the elimination round, each team must catch the biggest fish they can and bring it to Zaldain, who will present them with some valuable intel. Next, the teams must use their AutoChart® Live map on their SOLIX® fish finder to catch the most fish within their assigned boundaries. In a down-to-the-wire finish, the team with the least number of fish is eliminated, leaving the others to fight for the championship in the upcoming fourth and final episode of the series.

In last week’s episode, the teams raced against each other to see who could catch the first fish using only their Minn Kota Ultrex™ trolling motor and Spot-Lock™. Mike Roy and Tyler Anderson won the first challenge and gained immunity. The winning team spent the day with Chris Zaldain who offered them valuable advice. Meanwhile the other three teams competed to see who could catch the three biggest fish for a combined weight to stay in it. It was a close battle, but ultimately, Ashley Nicole Lewis and Cameron Black were sent home during the tense weigh-in ceremony where they came up short. 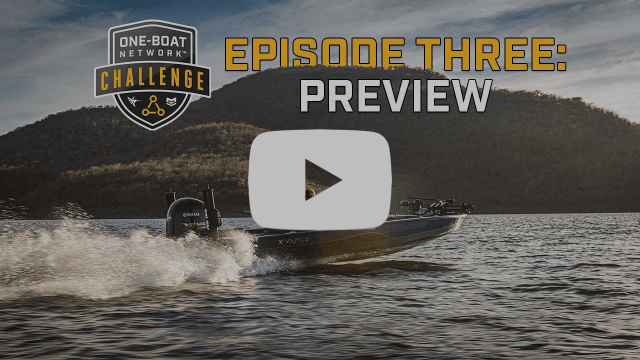 Tune in on Thursday, April 2 to find out which team gets sent home and follow along with the series by tracking #ONEBOATCHALLENGE. The episodes can be viewed at www.OneBoatChallenge.com.