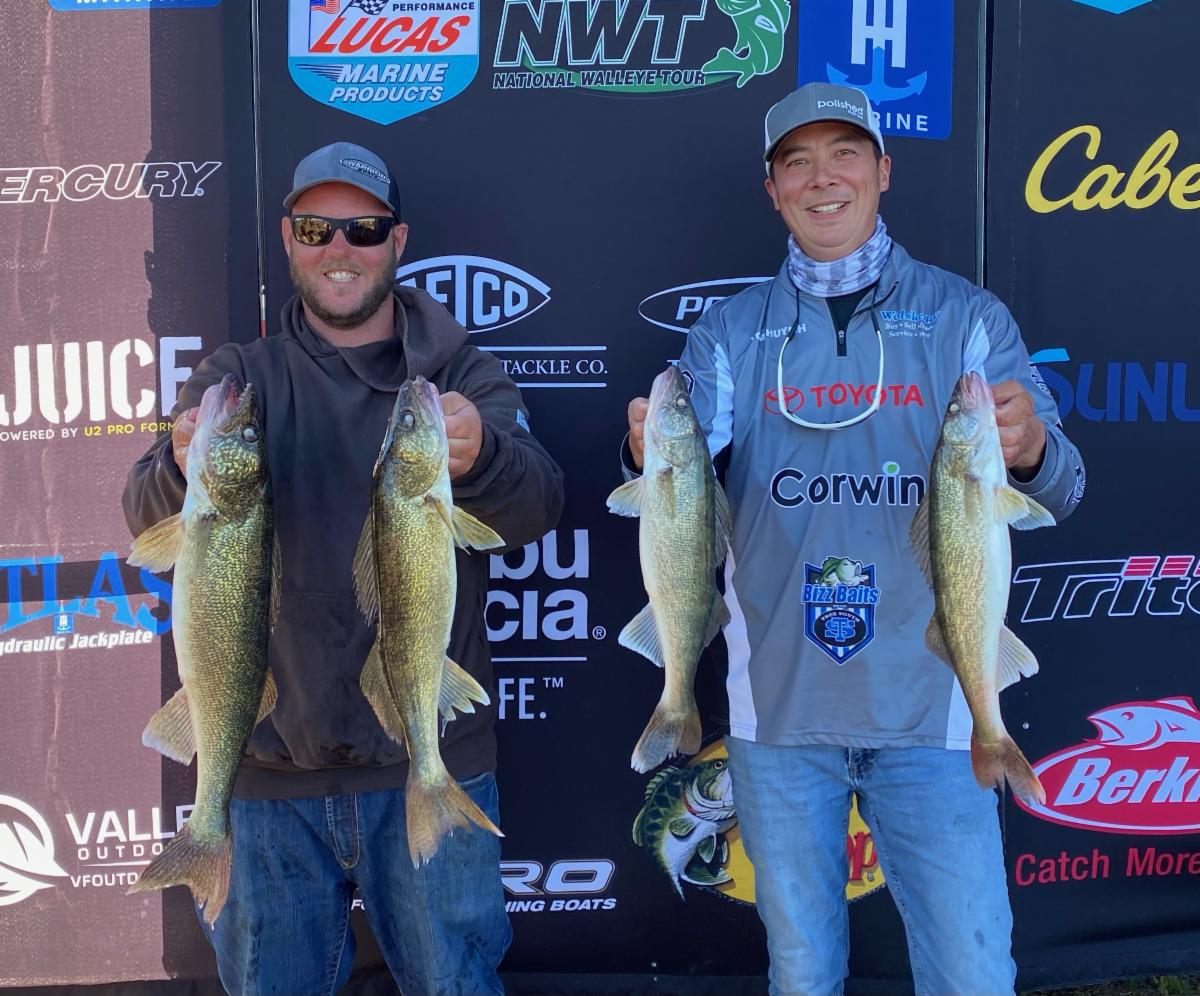 In Minnesota, September is known as transition time. Sometimes the weather and the walleye fishing resembles summer, and sometimes the temperatures plummet and it feels like fall. This yo-yo effect oftentimes confuses the fish and leads to sluggish, unpredictable behavior. Day one of the 2021 NWT Championship on Otter Tail Lake was a grind for some, but the cream of the crop still rose to the top. Leading the most lucrative event in professional walleye fishing is multispecies pro Tom Huynh, who took a unique approach in catching his 16-pound stringer.

While the weights at the top of the leaderboard were strong, the Lucas Oil Angler of the Year race took an unexpected turn. Mark Courts came into the tournament with a 12-point lead over Chase Parsons and a 16-point lead over Drake Herd. After uncharacteristically failing to catch a legal walleye, Courts opened the door for some major drama. Parsons didn’t do himself any favors either, as he caught only one fish and sits 39th out of 40. Unofficially, Herd now has a 17-point lead over Greg Ehli, but a lot can change tomorrow.

“First and foremost, I wanted to get off to a good start, and I did that,” said Herd, the local pro who calls Otter Tail his home lake. “I’m confident in what I’m doing, and I’m feeling good. We’ve still got a long ways to go, so we’ve got to keep battling. I fully expect both Chase and Mark will have great days tomorrow.”

“To get anything above 12 is huge. My main focus is to get into the top 10. I just want to be there on the third day.”

Like Herd, Huynh has been on a roll lately. After fishing the Bassmaster Opens for three years, Huynh first tried his hand in competitive walleye fishing last year. A few wins and a Team of the Year title later and the walleye world is officially on notice. What’s peaking everyone’s interest is that Huynh claims to be using unorthodox walleye tactics. By rule, that means he’s not trolling; he’s casting like a bass fisherman.

“I would call my method aggressive finesse,” said the Moorhead, Minn., pro, who owns and operates three Polished Nail Spa locations. “It’s not traditional; I won’t do traditional. I will troll, but pretty much only on Lake Erie. My goal is to figure out how to catch these fish my way. That’s why I was a bass fisherman in general.”

Huynh’s biggest fear is that a television camera will be in his boat tomorrow. That means his unorthodox secrets will eventually be revealed.

“I’ll just say that it’s unique technically speaking. I think people are going to be surprised.”

Huynh said he caught eight or nine legal walleyes today, and that he intentionally pulled off productive spots with management in mind.

“I think I can go out there and catch a limit again tomorrow. Now getting 16 pounds again is a tall order.”

Fresh off an emotional win at Lake Oahe, Kent Andersen is fishing with momentum on his side. Andersen, who now lives in Amery, Wis., grew up down the road in Alexandria. While he’s adept at structure fishing, he doesn’t have much experience on Otter Tail.

“To be honest with you, I’ve fished Otter Tail a total of three times in my life,” he said. “This is not my home body of water. But that being said, I’m no stranger to natural Minnesota lakes.”

Andersen, who utilizes a tiller boat, admitted he’s backtrolling structure. He said the specifics of his program will have to wait.

“I can tell you that I’m going backwards with my Mercury, and it’s all about boat control. I was keying on the fish with my Humminbirds. Some bit, some didn’t.”

Like Huynh, Andersen only caught eight fish. Those came from six different spots.

“It’s a grinder bite, and that’s more or less what I expected. We’re about 10 days away from these lakes taking off. I’ll be honest, the way this is setting up is right in my wheelhouse. The next three or four weeks is my favorite time of year to go fishing.”

With 15.90 pounds, Andersen is in position to potentially go back to back.

“I’m happy to do well, but I’m not one to get cocky because those fish have kicked my butt more than I’ve kicked theirs. It’s going to be a grinder bite again tomorrow.”

Michigan pro Ed Stachowski is in third place with an official weight of 15.70 pounds. The 2016 Angler of the Year sampled more than a dozen spots on Otter Tail today.

“We caught numbers of fish today,” said the Canton, Mich., pro. “We were upgrading throughout the day – one here and one there.”

Rounding out the top 10 pros after day one on Otter Tail Lake:

The second day of competition begins tomorrow at 8 a.m. Central time as the full field takes off from Beach Bums Bar & Eatery located at 35776 Co. Hwy. 72 in Battle Lake. The day-two weigh-in will also take place at Beach Bums Bar & Eatery, beginning at 4 p.m. The full field fishes each of the first two days with the top 10 advancing to the third and final day. The winner in each division is determined by the heaviest cumulative weight.