DEVILS LAKE, N.D. – Four years ago, John Hoyer decided to commence his transition from guide and co-angler to professional walleye fisherman. His teammates and travel partners knew he was ready. After all, in 2015 he won the Co-angler of the Year award on the National Walleye Tour, presented by Bass Pro Shops and Cabela’s. What they didn’t know was that Hoyer would soon become the hottest walleye stick on the planet. In his last three NWT events, Hoyer has finished first, second and first. The one common denominator from each event is casting. Hoyer’s latest casting crusade came at Devils Lake during the premier event in walleye fishing.

Hoyer started the final day of the championship essentially tied with friend Dusty Minke. While Minke had an excellent final day, Hoyer put the hammer down with a 24.59-pound limit. He fished six different spots in East Devils Lake, but one clearly stood apart from the rest. 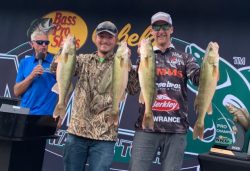 “It was a sand-to-rock transition that went from the bay to the point,” said the Simms pro. “It was basically a sand runway. The water was 8 to 10 feet, and they were feeding on perch. My fish weighed heavier because they were eating those perch. That made a huge difference.”

Hoyer didn’t catch many fish on this spot in practice. In fact, he didn’t know how stocked it was until he started employing his Lowrance SideScan.

“What gave me the confidence to Spot-Lock for so long was how many fish I saw swimming by on my Lowrance. Just knowing how many fish were there was incredible.”

Five of Hoyer’s 15 weigh fish came via slip bobbers and leeches under 1/16-ounce jigs. The others came from a mix of Shiver Minnows, Jigging Raps and Johnny Darters.

“The best color was anything perch with an orange belly. I used the No. 2 Shiver Minnow, the No. 7 Jigging Rap and mid-sized Johnny Darters. In the wind yesterday, I would upsize baits.”

With the smaller casting baits, Hoyer would employ a hard snap and then follow them down. With the bigger baits, he’d lift it aggressively and then control the fall.

“I wanted to slow the fall down. When you catch it, it planes out, and that’s when they get it. You’re giving them a chance to really eat it.”

The Orono, Minn., native had 24 pounds in his livewell by 9:30 this morning. However, he wouldn’t have won the event without a final upgrade that came with 30 minutes left in the day.

“The tournament-winning fish came from shallow timber and weeds. That last fish gave me the 1/2-pound upgrade I needed. It ended up being the winner.”

Hoyer’s three-day cumulative total was 67.73 pounds. He hasn’t had the time to fully process his latest achievement.

“I’m numb; I have no idea how it feels. It’s not like anything. It’s not real. You don’t get the chance to win very often. I’ve had three of those chances in one year and two went my way.” 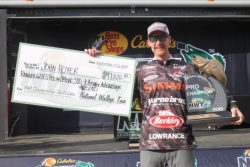 For winning the biggest event in competitive walleye fishing, Hoyer earned a Ranger 621 FS with a 300 horsepower Mercury outboard, $15,000 cash, and another $2,225 in Anglers Advantage cash for a total purse of $97,320.

“I said yesterday that I wanted Dusty to win, and that was the truth. I’ve already had the year of all years. It’s so weird. I was so excited for him when I saw his big fish today. I’m proud of what we both accomplished.”

Tommy Kemos had one of the best tournament days of his career, but it wasn’t quite enough to take the title. Coincidentally, he and Hoyer each recorded identical 24.59-pound stringers today, meaning he finished .43 pounds behind with a total of 67.30.

“I had a bad practice, so I’m really proud of how I adjusted,” Kemos said. “The game plan all came together, especially in terms of how many quality fish I caught.”

Kemos caught a limit within 40 minutes this morning. He said the strong early bite may have contributed to him being too aggressive with what he kept and what he released in a no-cull tournament.

“I felt like I was sitting on somewhere around 25 pounds, so I wasn’t going to keep anything under 5 pounds. I ended up throwing a few back that were in the high 4-pound range that definitely would have made the difference. From that perspective, it’s bittersweet.”

Kemos rotated between three Strike King jigs – two of which are prototypes.

“I used the new 3/8-ounce, the new 1/4-ounce, and a football-head jig. I was fishing them with a variety of plastics, mainly a 3 1/2-inch swimbait and a ringworm. Bright colors were best, especially anything with orange.”

The Oconomowoc, Wis., pro said the jigs performed well in the snaggy cover as the hook shank consistently stood up. In addition, the longer shank held his plastics straight.

“I was basically pitching the jigs under the Brinesmaid Bridge in Pelican Bay. My other spot was a culvert about 3/4 of a mile away. The bridge is not a secret spot. Others were fishing it. I could keep an eye on the boats that were at the bridge. I would fish the culvert until everybody left. I didn’t want to show everybody the deal.”

Kemos said the others were largely fishing the sides while he was skipping underneath the bridge. In both spots, the water was 4 to 12 feet deep.

“My electronics were huge for me this week. They allowed me to see underneath that bridge. Several times today when the bite slowed, I was able to scan back and forth and see that the fish had repositioned.”

For second place, Kemos earned a fully equipped Triton-Mercury package plus $2,925 in bonuses.

After a run-and-gun, sporadic day, Minke thought maybe he won the tournament when he stroked a 27-incher with just five minutes left to fish.

“When I caught the big one, I thought I might have it, I really did,” recalled Minke. “But I fished a good tournament. I’m happy for my teammate. He’s a heck of a fisherman. Watching him progress and succeed has been awesome.”

While Hoyer was on the east side, Minke stayed west and worked three different patterns near Grahams Island and in Pelican Bay. He weighed 14 fish in three days with nearly an even split between the three.

Minke’s co-angler nicknamed him “Gunner” because he hit so many spots today.

“I had the big-fish spot near the ramp, otherwise it was one here and one there. I fished spots today that I never touched earlier in the week. If the wind was right, I would stop. I was fishing confidently and instinctively.”

“We came in one fish shy on Friday and that cost us. I’m not upset with third. I’m proud of how I fished this week.”

Fishing the same area as Hoyer, Bismarck, N.D., angler Greg Ehli was been remarkably consistent all week. On day one, he caught 20.82. On day two, he caught 20.26, and today he managed 20.11. This consistency resulted in a three-day total weight of 61.19 pounds, which placed him fourth.

Finishing fifth was Angler of the Year Tom Keenan. While Keenan was tied for second in the AOY race coming into the championship, he was still considered a longshot. He started 20 points back of pro Brett King, who claimed the 2018 AOY. On day one, Keenan and King were both in the top 10. On day two, the race completely turned upside down as King only managed two small keepers. In the process, he tumbled to 36th while Keenan made the top-10 cut. Keenan finished his final season with 756 points while King accumulated 745.

“I had a heck of year in 2006,” recalled Keenan. “That was a special season for me, but this one ranks right up there. I set the goal to win AOY because I told my wife this was my last year to do it.”

Keenan retires as one of the greatest walleye fishermen ever, one who’s clearly still at the top of his game.

“I wanted to go out with a bang. I wanted to fish a great, clean event. If Brett would’ve won, I would’ve been fine with that, so long as I fished clean. To win it, to go out on top, it means everything to me.”

Keenan caught every single fish on either a No. 5 jointed Shad Rap or a No. 5 Rattlin’ Shad Rap.

Keenan targeted rock piles and road beds. Instead of going down the road, he was intentionally hitting the edge – smashing the crankbait into the side of the ridge. The top of the road was 14 feet, and the edge was approximately 10 feet deep.

Rest of the best

Rounding out the top 10 pros at the 2019 National Walleye Tour Championship on Devils Lake: