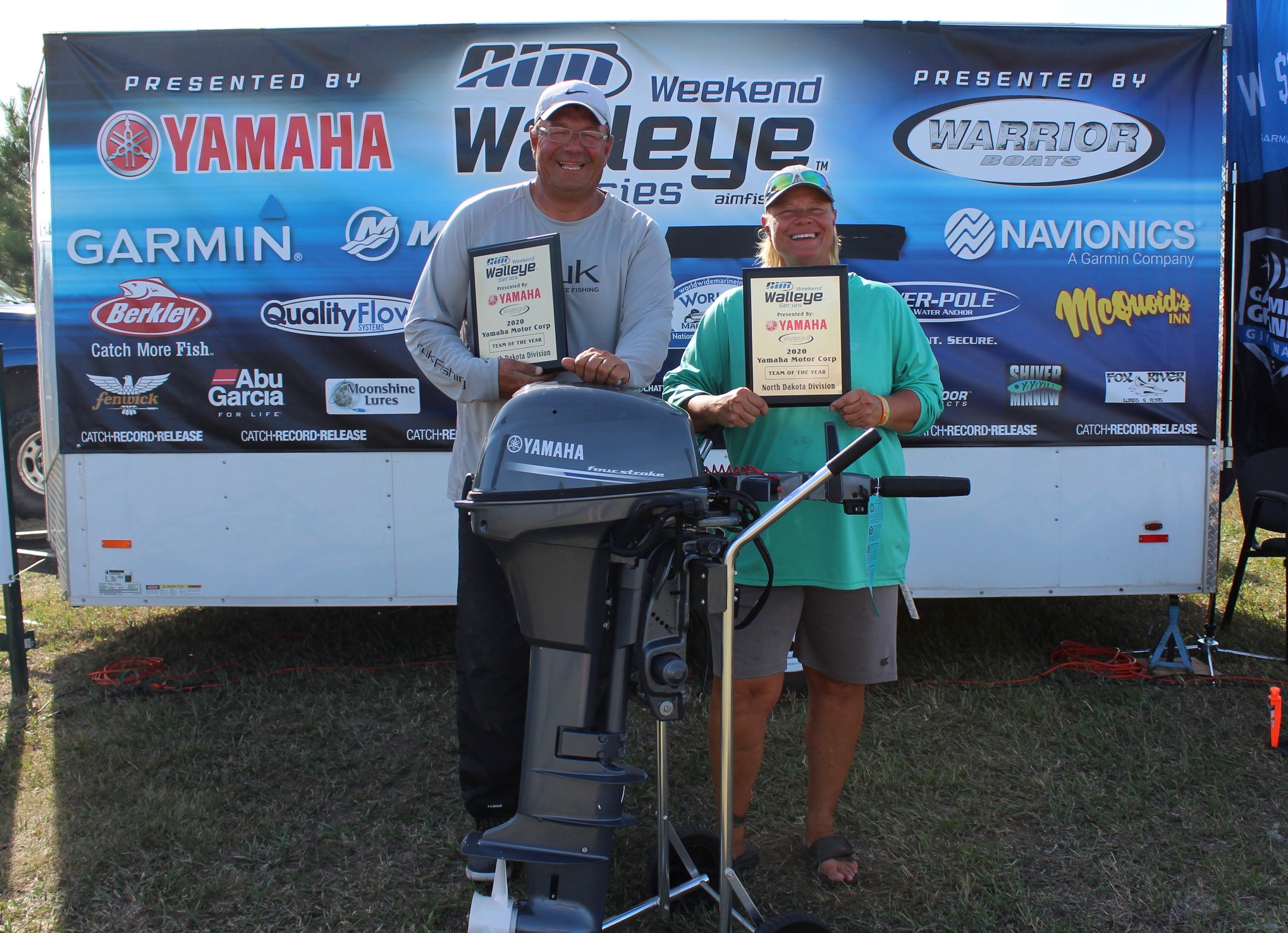 It was neck and neck, and it still was until the AIM Weekend Walleye Series/Yamaha Motor Corp. North Dakota state championship on Lake Sakakawea, but Lonnie Jacobs and partner Janine Landsiedel eked it out by finishing third overall, besting the eventual second-place team by six points Aug. 14-15, to take the coveted Yamaha Motor Corp USA Team Of The Year (TOY) title for 2020, earning them a new T9.9 kicker and a guaranteed golden ticket to the 2021 National Championship Shootout.

“It was a great contest from start to finish, NoDak,” said Denny Fox, AIM national tournament director. “Any time a title is within reach of a couple of teams, the tension mounts to see who will do best under pressure and go away with that great Yamaha T9.9 kicker, and Jacobs and Landsiedel pulled it out.”

“We actually pulled it off,” echoed Jacobs, of Douglas, six miles from Garrison. “We had like 706 points and change, and he (second-place in Team Of The Year, captained by Matthew Liebel, who finished third at the championship) had 699 and change.

“We (he and Landsiedel) fished together all this year except one tournament, the AIM at Devils Lake,” Jacobs added. And from the way he recapped the season, you could tell that as TOY honors became a possibility, that it became one of their goals after a rough start.

“At the beginning of the year, it was a long way to go. We really had a bad tournament at Garrison. The second event of the year was at New Town, and we did well, we got fourth,” he said.

“Now we were thinking, if we can have a good event at Devils Lake, we could throw out Garrison (teams drop their lowest finish, counting their best events total towards the title).

“We did okay there and began thinking, if we don’t have a big one…And then we won the Parshall tournament, and if we weren’t in contention for Team Of The Year, maybe we wouldn’t have done what we did at Beulah Bay.”

Like a lot of other teams, they pounded through high waves during the championship to go back to Van Hook Arm. Right back where they’d been doing good at two other AIM tourneys for the last month and a half. Hesitant to reveal the spot where he won at Parshall a few weeks ago, he’s glad to spill it now:  Shell Island, off Pouch Point.

“On Day One of the championship, we had 16.29 pounds, and on Day Two when the wind blew we never left our spot. We ended up with a couple of upgrades at the end, and that might have been what pushed us over the edge.

“It’s a huge accomplishment. We both are very proud of that. We’ve won AIM tournaments before, but I don’t think we were going to be Team Of The Year when the season started out. It shot us down a little, but we bounced right back, aiming high again,” he added. “You’ve got to set your goals high, and after that Garrison tournament it was a long, long row to hoe. But things really fell into place at the end.”

They finished third at the championship with 50.98 pounds and got a $2,000 check. They also took first place in the side pot for another $1,250, and Team Of The Year honors with that new Yamaha kicker. Not a bad way to finish the year.

Finishing in second for TOY, those six points off the mark, was Matthew Liebel of Williston and and Joshua Brew, Watford City. Going into the championship, they were leading TOY standings by 10 points.

“We stuck to our game plan all year. We had spots and we were going to grind it out and it worked every tournament,” Liebel said. “We had a great season, and the first three tournaments we ground it out. Come the championship we had that one spot and had an outlier. If they bit we could have won, but they didn’t. That’s the way it goes.

A great consolation prize was that Liebel secured a berth in the national championship in 2021. “This is my fifth year in AIM in North Dakota and I’ve gotten in every year. Maybe the fifth time’s a charm. We’re going to swing for it, that’s for sure.”

Stay with AIM for previews of the other two state championships starting this Friday, with the Wisconsin championship on Lake Winnebago, followed by Minnesota on Lake of the Woods Aug. 28-29. Team Of The Year honors and that Yamaha kicker are both in play.

Watch for day-of updates on both, posted at AIM’s Facebook page. Details on all AIM tournaments are at the AIM website.