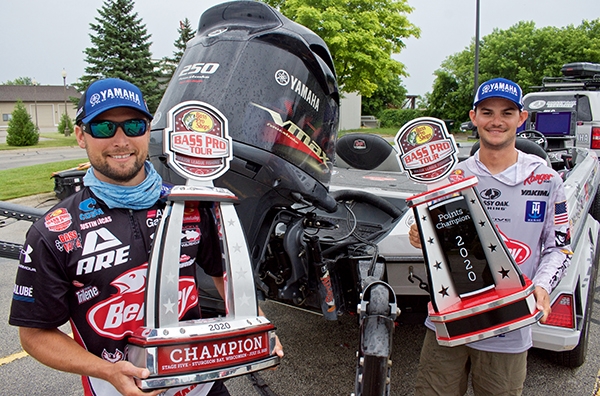 If you think catching five or even 10 nice smallmouth bass during a day on the water would be nice, think how catching 50 might feel. Yamaha Pro Justin Lucas did just that enroute to winning the Bass Pro Shop® Tour’s final event of the 2020 season at Sturgeon Bay, Wis., and he likes the feeling.

On the first day of competition, he weighed 50 smallmouth totaling 141 pounds, nine ounces, a new Bass Pro Tour one-day record that equates to one fish every nine minutes, each weighing nearly three pounds. He caught more than 78 pounds of those fish in just two and a half hours.

Lucas followed with 21 more smallmouth weighing 63-13 his next competition day, then sealed his victory on Championship Day with 38 bass weighing 110-05.

“I have fished some good smallmouth waters in the past, including here at Sturgeon Bay, but I’ve never experienced anything as exciting as this tournament,” Lucas continued. “The timing this week was perfect. The smallmouth had spawned a short time earlier and were moving out to deeper water in Lake Michigan, and they were hungry. I was able to catch them during that migration.”

The Yamaha Pro did not find his key area until the afternoon of his first practice day, after his original game plan failed to produce the quality of fish he was looking for. He changed locations, keying on a large flat filled with isolated clumps of vegetation. The smallmouth, he discovered, were hiding in those clumps, each less than the size of his boat, while others were concentrated on a long, rocky point leading into the flat.

“During that first afternoon and all of the next practice day, I marked waypoints on about 50 of those grass clumps where I found some quality smallmouth, including one fish weighing six pounds, seven ounces,” he explained. “That’s the biggest smallmouth I’ve ever caught, and it was a post-spawn fish. If I’d caught it a month or so ago, it might have weighed as much as eight pounds.”

The best part of all, Lucas added, was that no other competitors were fishing the flat. That night, he called his wife and told her he had found enough smallmouth to win the event, something he had never before done. He was that confident.

“I was in Group A, the way the Bass Pro Tour officials divided us, so I fished the first day,” he continued. “I concentrated on the point, not the clumps of grass, and once I started catching so many quality fish, I didn’t need to leave. I fished the second qualifying day there, too, and won the Group A division by 45 pounds. That meant I did not have to fish the Knockout Round and would go straight to the Championship Round and could fish the grass clumps I’d been saving.”

His good fortune in having that unfished area all to himself seemed too good to be true, and it almost was. In Bass Pro Tour events, weights are zeroed for the Championship Round, giving all 10 finalists an even chance of winning, and after a weather delay during which no one was allowed to fish, Lucas discovered the smallmouth had left the first few grass clumps he visited.

“I’d built a 15-pound lead before the bad weather set in, but I knew it was disappearing quickly because other anglers were catching fish,” the Yamaha Pro concluded, “but then I found them on some different grass clumps and I started catching them again. My goal had been to catch 125 pounds for the day, but 110 was still enough to win, thank goodness. Still, I had a few anxious moments, believe me.”

Just as interesting as the sheer numbers of smallmouth Lucas weighed is the fact all 109 fish he caught hit the same presentation, a dropshot rigged with a small plastic worm. He fished about 20 of his 50 marked grass clumps, and caught the smallmouth between 15 and 20 feet deep.

Fellow Yamaha Pro Jordon Lee, who finished fourth behind Lucas at Sturgeon Bay, won the 2020 Bass Pro Tour Angler of the Year title. Lee, 29, won the Bass Pro® Tour Heavy Hitters tournament in Fla. earlier this season, and adds this accolade to two Bassmaster Classic® titles he won in in 2017 and 2018.