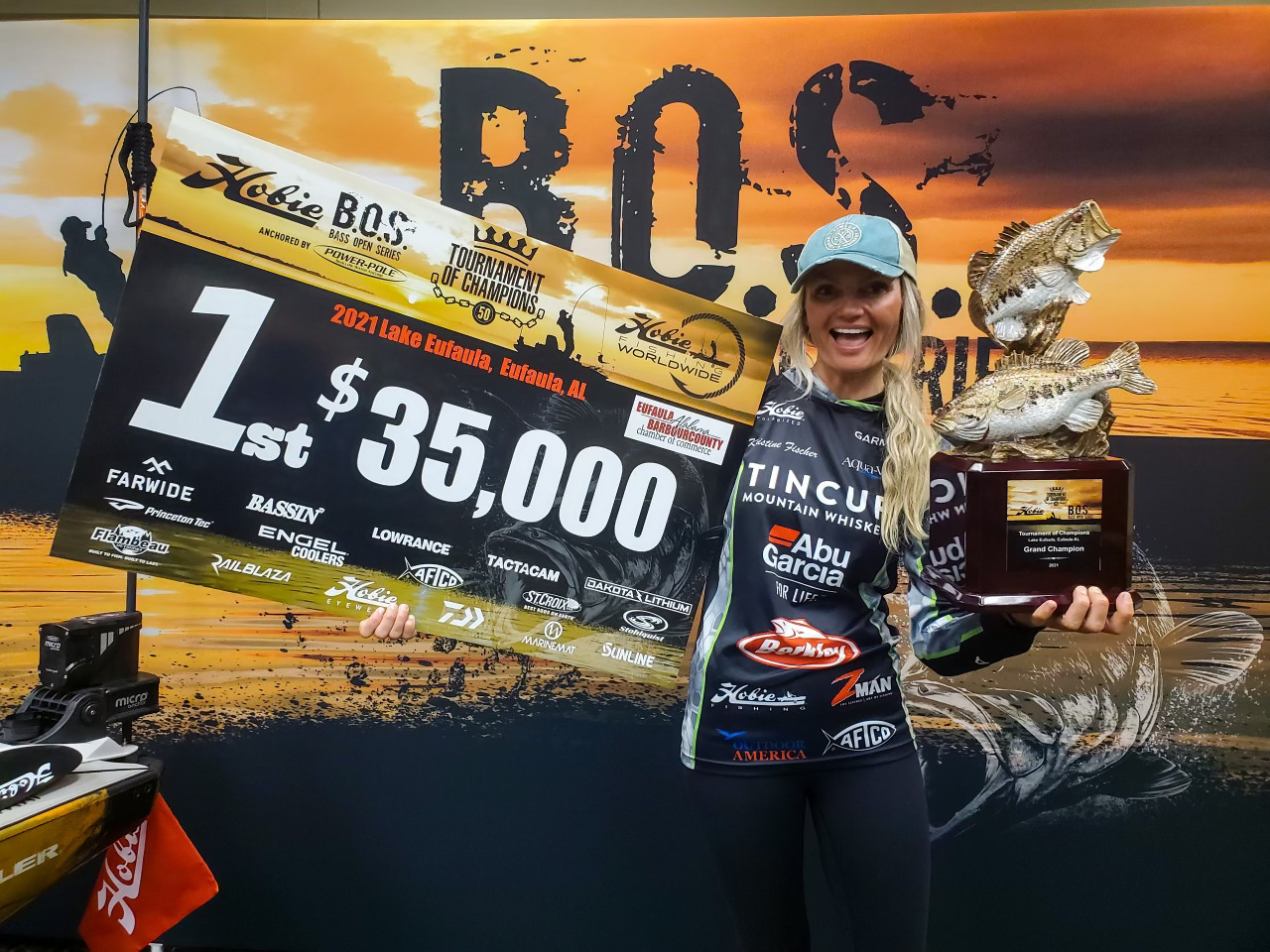 The 2021 Hobie Bass Open Series Tournament of Champions, a kayak bass fishing championship event, was held on Lake Eufala, Alabama from Friday, November 12th to Sunday, November 14th. Only the Top 50 anglers in Hobie BOS Angler of the Year standings qualify for this three-day championship style event and the angler with the five longest bass (in inches) on each day will take home the crown and a grand prize of $35,000.

Going into day one of the event, Fenwick and Abu Garcia Pro Kristine Fischermentioned “I had never fished Eufala but the research I did leading up to the event led me to believe the fishing was going to be tough. It was a three-day event, so I wanted to avoid areas that only held resident fish and concentrate more on areas that would reload over the course of the event. I knew Eufala had a reputation of having a great offshore bite, specifically live scoping brush piles, and I knew that would likely play in this event. However, my strengths consist of power fishing shallow, so I was determined to find an area where I could fish my strengths, and not worry about the “dock talk” regarding people catching them good out deep. I covered and eliminated a lot of water and had a tough practice. I was able to get a few bites in practice fishing main lake bank grass, and bank grass around the mouths of the pockets. I knew we had a cold front coming in day two, and a freeze warning for Sunday, so I looked at the east side of the lake knowing the northwest wind would blow in that warmer main lake water.

Fischer grabbed her Fenwick rods, Abu Garcia reels, committed to her pattern on day one and put up 77.00” for her best five fish, putting her in 11th place going into day two.

On day two, Fischer continued her pattern of throwing a Berkley Cane Walker in the mornings, punching bank grass once the sun was overhead and committed to fishing new water. Her second day total was 80.50” for her five longest fish, bringing her total to 157.50” and sitting in 3rd place going into the third and final day of competition.

Going into the last of competition, Fischer mentioned, “I was fishing new water every single day so I wouldn’t lean too hard on the few stretches of bank grass that seemed to hold fish. Isolated clumps and any subtle point in the grass were key for me. I was lucky enough to have a large area all to myself for the final day.”

Starting off with the final day of competition with a 19.00” kicker, Fischer was able to put together her biggest bag of the tournament by slowing down and catching her limit on a fluke and a stickbait, ending with 83.00” for her five longest bass which totaled 240.50” over the three days of competition and earning herself the 1st place trophy and $35,000.

In line with winning the Hobie BOS Tournament of Champions, Fischer came into the tournament sitting in 13th place for the Hobie BOS Angler of the Year standings. Fischer was very close to also claiming that title but came up very short in 2nd place.

Fenwick and Abu Garcia’s Vice President of Marketing Jon Schlosser mentioned, “First off, we really want to say how proud we are of Kristine. Not only for this remarkable achievement and win to add to her laundry list of tournament finishes but for how she paves the way for female anglers. We could not be prouder of how she carries herself and represents us here at Fenwick and Abu Garcia.”

Capping off an incredible season in 2021, Fischer concluded with, “This event is like the Bassmaster Classic of kayak fishing. The culmination of a long season’s sacrifices and efforts, with the 50 best anglers in our sport. Qualifying for this event is a feat all in its own but to win is something I can’t quite put into words just yet. I’m just so incredibly thankful for what this sport has given me and for all the support and encouragement I have in the industry. I also qualified for Hobie Worlds again. I was the first female to ever qualify for this after my Kentucky lake win three years ago so I am excited to get back to that event. All my career, I have never wanted any additional accolades because I’m a female in a male dominated area. I have always preferred to leave that out of it, but so many people have reached out saying their young daughters watched the awards and were ecstatic to see a girl up there with the trophy. In addition, reading the posts of tons of women saying this inspired them moved me beyond measure and made me realize the magnitude of this accomplishment. I hope to continue to be a great ambassador for our sport and I can’t thank everyone enough for everything they’ve done for me over the years.”