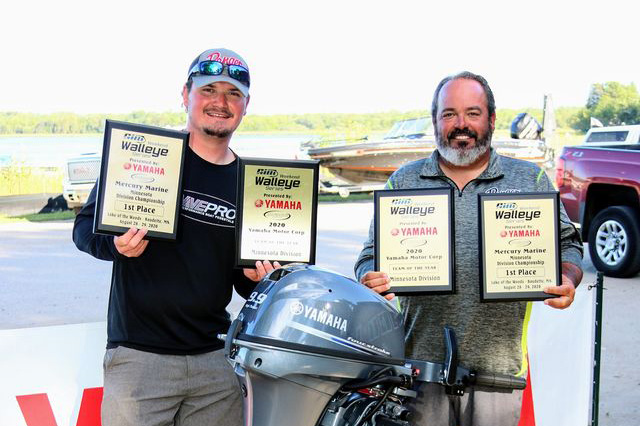 Anybody have a can of spray paint tucked aboard your walleye boat? You can bet that at least one can will be standard issue for Anthony Nitti and nephew Hunter Nitti, who used a dab here and there on one lure to win the AIM Weekend Walleye Series/Mercury Marine Minnesota State Championship Friday and Saturday, Aug. 28 and 29 at Lake of the Woods (LOW), and going home with more than $10,000 in winnings.

“What a great finish to an extraordinary season in so many ways, including this pair’s first full season together fishing with us, and in a boat they just got two days before Day One. All you can say to that is wow,” said Denny Fox, AIM national tournament director. “Team Nitti has a great story to tell about that spray paint can, along with Lake of the Woods’ ability to produce true giants for them and the other teams who came to Baudette and made this event one to remember. We’re already looking forward to returning next season, as this is hallowed, must-visit water for any walleye angler. Thanks again for the support from Lake of the Woods Tourism.”

You can take that to the bank too, that that’s the way the Nittis, Hunter from Rosemount and Anthony from Blaine, feel, after sitting in fourth after Day One in their Mercury 400 Verado-powered boat, but consistently finding winning fish.

Pre-fishing, they ran through their tackle boxes, Tony Nitti said. “We tried spinners. Spinners with crawlers. We heard a rumor of spinners with shiners. We didn’t have a whole lot of success. But we knew there was a lead core bite with some bigger baits,” Nitti added.

“We pulled Rapalas, Reef Runners, Bandits. We caught stuff on Number Seven Raps, and lures five to eight inches long. What we found as the week went on that the biggest thing was color,” he continued.

That same observation was what several teams reported during pre-fishing. In the stained water of LOW, color mattered most. And, since Nitti has another tournament coming up soon, that’s all you’re gonna get right now. Suffice it to say there’s a story behind that, and it’s a tale involving that spray paint.

They then tried other colors of the same brand but weren’t catching anything near what that one did. Well, they decided to try it again. Can you guess what happened? Yup.

“We said, let’s put it back on and the first fish we got, it was a big fish, and it broke the line. Hunter ran all over trying to find that color and couldn’t get it. So, we went to the hardware and bought a can of spray paint and tried to mimic the color. Needless to say, it wasn’t the exact color, but we went out the next day and in the first 10 minutes, we got a 30-incher, and the next were a 27 and a 28, on his spray-painted bait,” Tony said.

Needless to say, too, for the next two days Hunter was custom-painting baits for their entire team.

Hard to believe, knowing that everyone knew that the mud was the place to be. The pair were alone, some 20 miles from the start point at Wigwam Resort.

“Where we were, the fish were coming slower than normal, and later on we ran and picked off one and got two more in a other area, to get 44 pounds,” Tony added. Well, actually 44.86 pounds.

“The first day coming in we knew what weight we had,” Hunter added. “We felt pretty good and we just knew we had to do it again the next day. We knew were definitely in the top 10, and pretty sure the top five,” agreed Tony.

Day Two began bumpy, with Lake of the Woods doing its best to add another variable into the competition.

“We felt pretty good. If it stayed as rough as it was, we figured the bags wouldn’t be as big, but towards the middle of the day it started to calm down. It was definitely nerve-wracking from then on,” Hunter added.

“We just got there and ground out the whole rest of the day. We lost a big one right away around 11:30 or 12, and that was nerve-wracking. When you’re 20 miles out, you waste a lot of time running, so we knew we just had to stay,” Tony said.

“Then we went down and made another pass and got a 29-1/2, and we started filling our card,” he said. “There were spurts of 40 minutes where we didn’t get a bite, then all of a sudden we hit two big ones. “It was a half-hour to 40 minutes later and we started talking about moving. We swung around and went about 100 yards and got a 28-1/2, and I said to Hunter, we’re not moving. And then we ended up getting a 28-3/4-incher with about a half-hour to go, and we knew we had a chance. We were sitting then in a pretty good position.”

All on that self-painted lure. Sounds like that color needs to be pitched to a lure maker for sure. Their total for the tournament: 88.24 pounds. Not only did they take first on LOW, they also scored an extra $1,550 in first place side pot money, and of course a berth in next year’s National Championship Shootout.

And, because they won, they took the Yamaha Motor Corp. Team Of The Year points race (more on that win in the next presser), taking home that beauteous 9.9 Yamaha kicker worth another $4,000, plus all the accolades that the coveted award brings.

In second place about two pounds behind were Jeff Holz of Dodge Center and Andy Hage of Mankato, who led the event after Day One. They took home $5,000, and $930 in side pot money.

“Our pre-fishing was good. We were averaging anywhere from 40 to 43 pounds a day. We were fishing basically out in the mud, following the fish around and keeping an eye on them every day,” Holz said. They used their V2090 Warrior, powered by a Yamaha 200, and a Garmin LiveScope to do it. They fished stick baits and lead core to get those lures down to the fish.

“I kept telling Andy that if we can do 40 pounds a day, all we need is a couple big ones each day. We were optimistic and hoping we could catch a couple of ‘overs’ (over 28 inches).

Day One at the dock, they had 51.05 pounds on their card, and led by nearly six pounds.

“We knew it was going to be tough to duplicate. Catching three over 30 in one day is a pretty rare feat. Day Two going out it was real rough. It took us about an hour and 20 to get to our spot. It was tough fishing and controlling the boat, and by 11:30 we were starting to dial’em in. We caught our first, a 25-incher, and started upgrading from there,” Holz continued.

“It was more about color there and once we got that dialed in there was no particular brand that worked. We were hoping for another one over 25 and we couldn’t get it. We ended with a 20-3/4-inch fish and we knew we had a shot but also figured we would be a hair short, and we were.

“Going into it our goal was a top five to make the National Shootout next year and we figured with our 35 pounds on Day Two (35.14 to be exact) we should be in that top five. We wanted to win. We only lost one fish and that was on Day One but it really didn’t hurt us. Andy is gonna have a hard time breaking 31 inches,” he said. But, we’re sure he’s going to give it his best shot, Jeff.

Rounding out the other top five positions, each receiving a 2021 Shootout invite, Chad Bleeker from Ellsworth, WI, and Jeremy Stoner from Roberts, WI, ended with 83.54 pounds and a $4,000 check, plus another $620 in side pot money.

Fourth place went to Brian Messerschmidt from Lino Lakes, MN, and Chris Messerschmidt, from North Forest Lake, who won $2,500. In fifth with 81.10 pounds and $1,700 were Tyler Wolden from Carlos, MN, and Nate Leininger from Miltona.

While the most unusual AIM season ever is in the books, the excitement isn’t just yet, as the story of that Team Of The Year win will be told next. Soon the site of the 2021 National Championship Shootout will be announced as a prelude to another great series of events on the water using AIM’s exclusive Catch-Record-Release™ format.

Make this sure bet: C-R-R, pioneered by AIM, is spreading to more and more tournament series as organizers and the public realize its benefits for all, especially for the fish where they take place, and the anglers who fish the lakes long after AIM leaves. As AIM anglers attest, C-R-R IS the wave of the future. That is a fact.

Stay tuned at AIM’s Facebook page for teasers throughout the hard water season on teams, our sponsors, and a new tournament season that will be here before we know it, where announcements on the 2021 season, including the location of the AIM National Championship Shootout, where a new Warrior Boat, with Yamaha power and Garmin electronics, also will be posted. See you there!

Details on all AIM tournaments and how you, Mr. and Ms. Weekend Angler, can ride that C-R-R wave of the future, are at the AIM website, and the Facebook page. Join in the fun!

AIMNewsTournament Newswalleye
« Rescheduled Sturgeon Bay Open complete with all the prizes and a Ranger boat powered by Mercury is coming up!
Winnebago System’s Upper Lakes Pay Off for Lakich And Beckwith, Who Take Wisconsin State AIM Championship »