Lake Sak’s Points Give It Up For Krieger, Ellingson In Sunday’s AIM Lake Sak State Qualifier 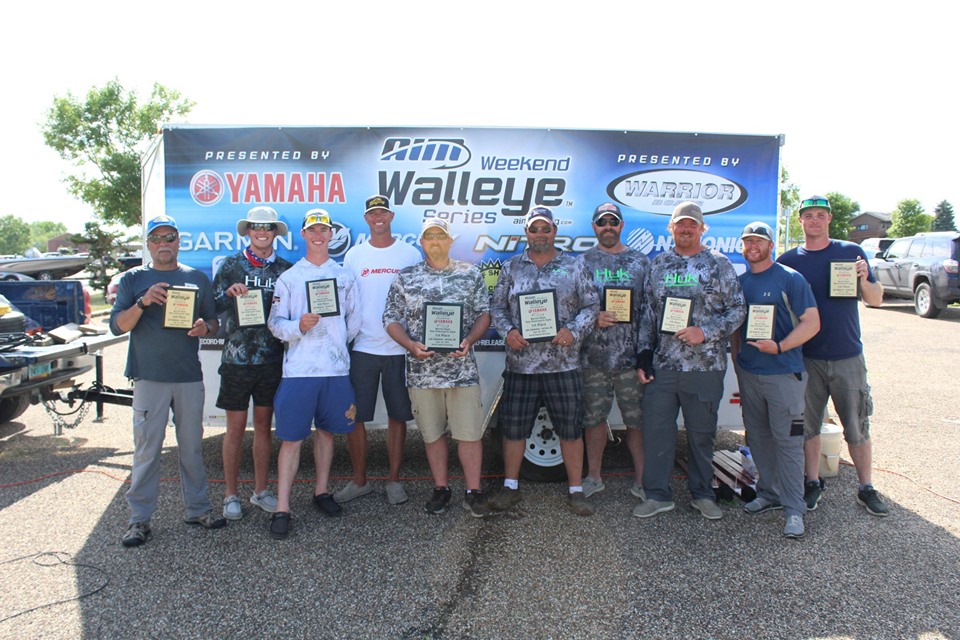 Justin Krieger and Rick Ellingson made it a point to fish Lake Sakakawea’s always productive points, and that tactic earned them first place in the AIM Weekend Walleye Series Warrior Boats/Pure Powersports Open on Sunday, June 30 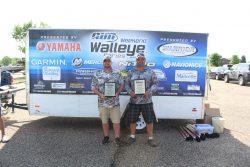 “This is how close this thing was,” said Denny Fox, AIM national tournament director. “They won it by less than a half-pound over a team that’d never fished this world-class walleye lake’s east end before, and who’d never fished an AIM tournament before this season. ”

Krieger and Ellingson, both from the lake’s western end at Williston, punched their 250 Verado for a run to a point they found about 13 or 14 miles from the launch, and a few boat lengths from the third-place team of Grant Miller and Mark Nies, both of Dickinson, who won May’s AIM tourney on Lake Sak at New Town. Krieger didn’t want to be specific about the location, because he’s got another tournament coming up, and hopefully the fish will still be there.

They thought they were going to do it with Jigging Raps, which worked in pre-fishing the day before, but such is walleye fishing: what worked yesterday doesn’t necessarily work today, but they only got one fish on them Sunday. Instead, they got their bag with: Lindy rigs and minnows.

“I started pre-fishing Thursday, more just driving around and graphing. Come Friday, my partner showed up and we fished up in Douglas Bay and did some slip bobbering and found just a few fish. So we went onto the main lake and tried the points and came across one that just lit up with fish,” Krieger said.

You can bet they went back on Sunday, and ‘eyes were still holding station on that point, a bit farther from shore, in the rocks.

“It must be a pretty well-known point because there was another tournament boat there (the eventual third-place team of Miller and Nies), and they put on a clinic for us. Those guys were just on fire,” he added. Until, that is, their fire went out, and Krieger and Ellingson’s lit up, and the students became the teachers.

Right now, Krieger’s feeling pretty good, too, about their place in Team of the Year standings.

“I think we’re going to be right up there, pretty close to the top. We had a good average. It was a great day on the water. It’s a world-class fishery out there, amazing. And that thing’s going to light up once the water level starts dropping,” he said.

The Lake Sak event was the team’s third AIM event this year, and Krieger says he’s sold on Catch-Record-Release™.

“I like the format. I’m a catch and release guy. I release everything 22 inches and over for sure. I love the fact that these fish go right back in. I’m not really happy with kill tournaments. These other summertime tournaments, the mortality rate is so high since the fish can’t survive in the live well,” Krieger said. He’s hoping more NoDak anglers will see the benefits of AIM’s resource-preserving system, and sign on.

The second place team of Greg Abdallah and Mike Donohue of Spearfish, South Dakota, also in a Verado-powered boat with a Merc 15-horse kicker, boated 31.03 pounds, within a fish tail’s length away. And he said the pair lost a couple that might have done it.

“We lost a couple that probably would have helped us but that’s just the way it goes,” Abdallah said. “When our electric motor ran out of power we used that kicker a lot.”

They found fish during pre-fishing Saturday, but not the size they wanted. Sunday, however, was different in the back arms of Douglas Bay where they trolled. “Our first fish was 10 pounds, and second was eight,” he said.

“We fished one side of the bay arm where we had fished Saturday and lost a pretty nice one right away, and never had another bite for about a half-hour. Several other boats came in on us so we went to the other side, and maybe 20 minutes later, caught that big one. We ended up getting our first fish there.

“We left at noon and went to another part and that’s where we caught the one that was almost eight pounds, using bottom bouncers with smile spinners and either a fathead minnow or a crawler. We pulled them at 1 to 1.5 mph,” he said. On Saturday we were catching fish in the weeds as shallow as four feet. But Sunday, the bigs were in 18 to 22 feet.

Abdallah said he’d never fished that part of Sakakawea before. “I felt like a six-pound average was going to be pretty strong, but there were some good fishermen there,” he added.

This was his first year fishing AIM, and like anyone who’s ever done it, he’s hooked. He’s convinced about the format.

“It used to be in the Governor’s Cup we had to keep fish alive in mid-July,” he said. And, that’s a tough thing to do. “We really like that we can measure them and get them back into the water. The rules meetings are short and to the point.”

In third, with 29.96 pounds, good for $1,400, were Miller and Nies, who also added to their Team of the Year points with this finish. He said Kreiger’s description of who was schooling who was “spot on.”

“We were in fishing with them for some part. The morning was a tremendous bite. We thumped’em, but about 11 it turned off for us, and there was about a two-hour lull and we had waited too long to go to our second or third spots. That’s how it goes,” Miller said.  Their main power? Again, Mercury. This time, a 225 Pro XS two-stroke.

Fourth place with 28.82 pounds were Kade Lynch, Bismarck, and Tanner Ouelette, Dickinson, taking home $1,200. In fifth, and bringing in $1,000 were Scot Swain and Jessie Schiele, both of Minot. They came in with 25.80 pounds.

Fan Nation, the Fourth of July is coming up, but so is another AIM state qualifier, this time on Minnesota’s famed Leech Lake. There are some definite faves in that contest, but never, ever, count out any team to bring it and get’er done. Anybody can win any AIM tournament on any given Sunday. Stay tuned. A week later, it’s back to North Dakota and the Missouri, this time on huge Lake Oahe at Hazelton. There’s lots of time to sign up for that contest.

We’ll preview Leech a few days prior to launch. When that event goes green, follow it all via Garmin Fish & Hunt on our Facebook page. Visit our website for information on all AIM tournaments and how to register for all AIM events. Have a great Fourth, everyone!