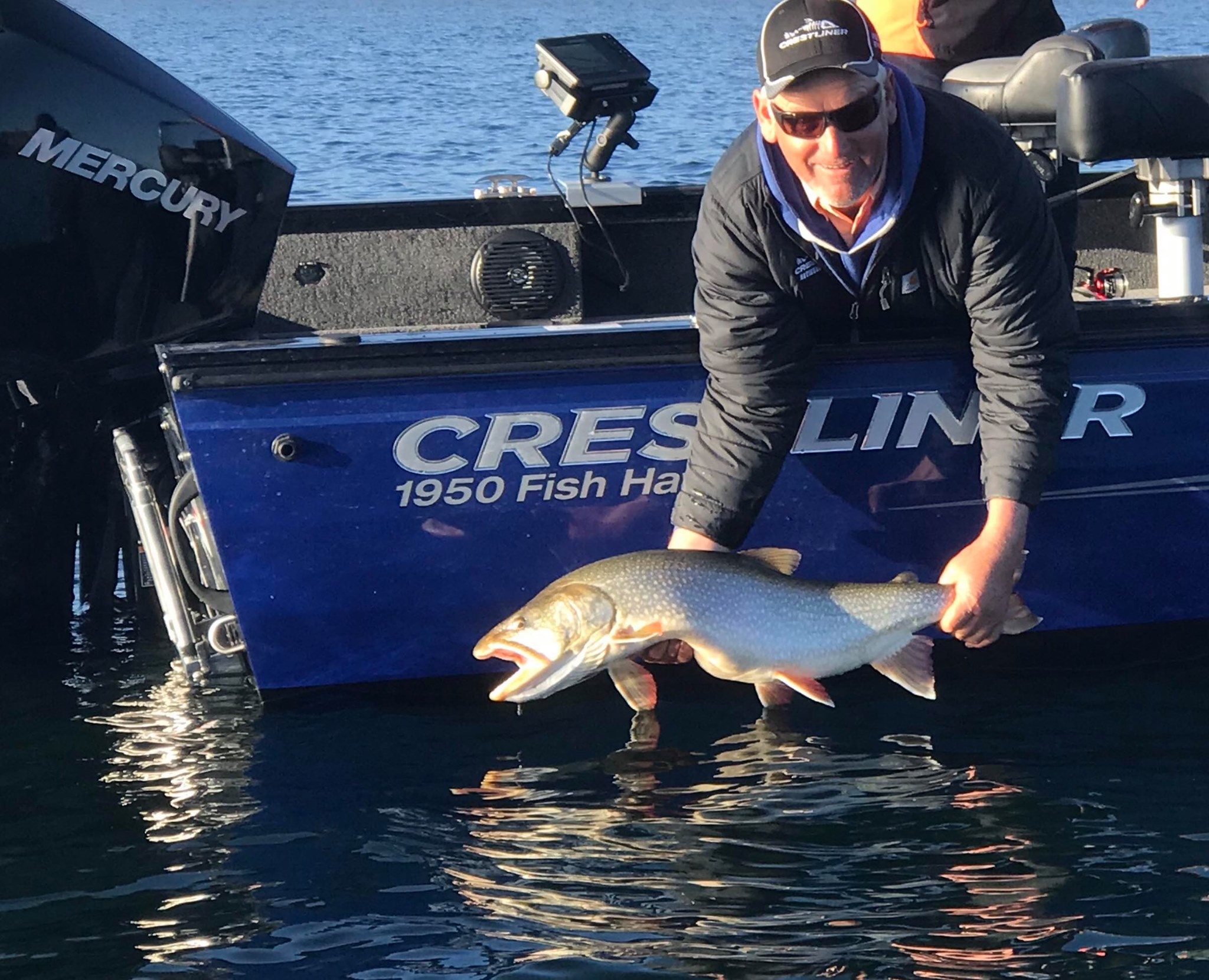 Lake trout spawn in the fall when the water temps fall to 48-57 degrees, eggs hatch about 140 days after being laid. This is a useless piece of information. I thought it would be a good idea to throw it in here, its how my mind works. For years I walked the shorelines of our reservoirs out west. Catching rainbows, browns, lake trout, salmon and pike.

Sometime in the 70’s a Dave Leman and I saw our first float tube. We saved up money and had one before the next spring. Shortly after that we figured out how to rig a sonar units on them. In time we learned how to move the transducers around to look for shallow fish at ice off. Shortly after that we were fishing Green Mountain reservoir, drifting over a deep point when we saw some marks on the bottom. We got the heaviest spoons we had in our box, dropped them down and were ignored until we started reeling them up. We both got hit, we had no idea how much this would change our lives.

About that same time Joe Butler wrote a book about trophy trout. I quickly learned casting big minnow imitating jerk baits was a great way to catch early and late season trout. Following Joes recipe for success after the jerk bait bite was over we switched over to paddle tail baits and lead heads. Having descent success with these techniques we were in heaven.

Sometimes in the late 70’s or early 80’s a gentleman named Dick Gasaway was down at Lake Powell fishing for stripers. During a very successful trip he ran out of spoons, reaching in his box he decided to try a tube jig. The stripers tore them up, fishing was even better with these things. His buddy was headed to Flaming Gorge the next week, Dick reminded him to try those tubes for lake trout and the most famous lake trout jigging lure was discovered. Dick guided on Granby for a few years, then decided he liked fishing more than guiding.

We heard the commotion about tubes and trout so we went and purchased a few. WOW! These things caught everything. One of our first trips with these was to Williams Fork reservoir near Parshall Colorado. We spent this snowy day walking the shorelines with tubes and caught over 50 fish. As time went on we fished them in our float tubes and figured out how and where to catch larger fish.

Around 1985 we started seeing paper topo maps. We ran to the stores and found some of our favorite waters. After looking at places we caught fish, then looking for more spots like that we started to figure out what structure fishing was all about. I started a log book, where I would draw tie points to the spot I wanted to fish. This worked very well but the book would occasionally get wet and the ink would run.

In the early 80’s I was given my first boat. It had fallen out of a pick-up and was in very bad shape. With a lot of help from a great friend (Curt Gallagher) and a few tubes of silicone we made the boat sea worthy (kind of). I could not afford a motor so I rowed everywhere I went. About a year later my dad gave me a 7 hp motor. Now I could go anywhere. After spending afternoons and sometimes an entire night on a windblown bank (The wind taught me the same lesson a lot of times. I learned to watch the weather and get off the lake before I almost died.)

I found an electric motor at a garage sale, built a small deck at the front of the boat and had a great boat. The boat ended up leaking A LOT! This taught us mobility, we could only fish one spot for a little while. We would have to get the boat on plane, pull the plug and drain the water out of the boat. Life jackets and throw cushions were on the bottom of the boat to help keep our feet dry.

One late September evening a friend of mine and I went out to fish for browns at night in Columbine Bay on lake Granby. There were low clouds, rain and a little wind. Perfect weather for browns. As the night got later the fog came in, we could not see 50 feet. It was so dark we could not find our way out of the last “pond” in the bay. When we finally did we got back to my trailer, I called and ordered my first GPS, this changed everything.

Now we could use our sonar units, the paper maps, my drawings to locate spots and mark way points on the GPS. I remember going out for hours locating structure and marking it. After a short while I realized the info I was putting on the GPS was a bit incomplete. I had so many waypoints I could not remember what was what. A friend mentioned putting names to them. We started naming spots some were common local names others were just made up. We then realized it would help if we added the depth at full pool this would help us know when to fish what spots. A waypoint might read “GRCC85” This included the lake, the spot and the depth at full pool. It was easy and quick.

In the late 80’s I found a 16’ Starcraft with an 80 hp motor on it. After putting a Lowrance LMS 350a and an electric motor on it, we were off. Then on a curious twist of fate on my way to the lake one day my truck blew a head gasket. That cancelled fishing, I took the truck to High Country Motors in Granby and had it fixed. While I was in the shop the owner came out and asked if I wanted to guide for him. He told me he just purchased an outfitter business for the hunting but needed a fishing guide.  I asked him “Why me” he stated “You are the only one dumb enough to go out every day”. That was my interview and I started guiding on Lake Granby.

I was just hoping to make enough money to pay for a couple fishing trips out of state. After a couple years I figured guiding also bought new rods and reels. In 2003, guiding was getting busy enough I went shopping for a new boat.  A friend of my brothers was a sales man for Colorado Boat Center, he found out I was looking for a boat and called me. I stopped by looked at what was then a Tournament Series 192. Really liked the lay out and purchased it. The boat center put me on their pro staff, gave me a discount on the boat. All I had to do was work a couple boat shows for them. This is when I met Terry Wickstrom, he was full of great insight and advice in the business. He still invites me on his radio show to share fishing reports and stories.

The following year I found myself guiding on Grand Lake, Williams Fork and Granby. Working almost 7 days a week between my day job of Utilities manager at Snow Mountain Ranch and guiding. The ranch was having a lot of problems with the water system and the swimming pool on the weekends. My boss came to me and made me an offer I could not refuse. I started working Friday thru Monday and guiding during the week. This opened up even more opportunities for me to guide.

In 2008 I met my wife Leesa while on vacation in Florida, after a couple dates and about 6 weeks we decided to get married. Within about 3 years she convinced me to quit my day job and follow a passion. We bought a house close to Lake Granby, and with great apprehension I started guiding full time. Guiding got busier then I could handle so I started bring a few people on board I thought I could trust. Now we have a great team with Dan Shannon, Randy Hall, Jake Foos and Sam Hochevar.

I started writing this article on lake trout and the spawn, that subject did not get far. But that’s how fishing goes. Plan on doing one thing, then change to another. I never thought that guiding would give me the career it has. With any luck we can supply enough education, laughs and fish to make everyone happy. Our motto has always been “Learn something, have fun and catch fish”.