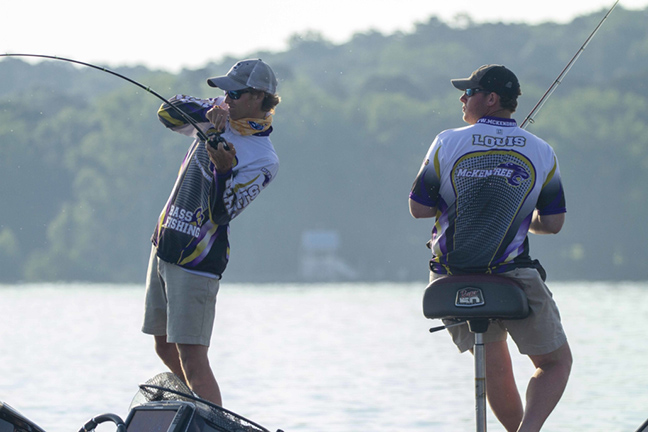 Park Falls, WI (August 12, 2019) – Team fishing is an interesting concept. New to bass tournaments, the idea of a true team effort where individuals strive for success of the group over that of themselves has never really been in play.

Given the growth in popularity of college fishing, however, anglers are now taking the team concept to new heights. And, while individual accolades are still important, one special award shouts unity more than any other: Bass Pro Shops School of the Year.

The brainchild of the popular Bass Pro Shops / Boat US Collegiate Bass Fishing Series, the School of the Year award considers performance in that circuit, as well as the BASS and FLW college fishing trails, when determining a champion. High finishes in major open tournaments also amass points. The award is incredibly hard to win, as the perennial top-seeded team from McKendree University found out with a near miss in 2017-2018.

After six years of competition and a top-10 finish nearly every time, the Bearcats finally got it done in the 2018-2019 season, taking the title by a wide margin.

“It was a real team effort this past year,” a relieved coach Jon Rinderer confirms. “This means everything in the college world of fishing.”

With help from his wife, Carla, Rinderer is taking the team-fishing concept to the next level with his athletes. “We travel to all the events, we organize everything, shop for all the food and cook all the meals,” he says. “We log over 12,000 miles annually, and every penny we can save, we use for gas and expenses.”

Rinderer admits that the cooking aspect – especially when trying to feed an army of twenty-something boys – can be quite the task. “At the Big Bass Bash on Kentucky Lake, we take the whole team – twelve boats – so it’s like having Christmas dinner every night,” he chuckles.

Through it all, Rinderer employs a message of unity and teamwork, which directly transfers into tournament performance. McKendree anglers begin with pre-tournament lake study, supplementing with important pointers from team veterans. “Many of the upper classmen now have experience on the tournament waters – including those on the Tennessee River. That was a struggle when we started,” Rinderer admits, as the vast waters of the mid-south were drastically different from those of McKendree’s home in Illinois.

During the team’s infancy, many of its members were understandably tight-lipped when it came to fishing locations and methods. After all, tournament bass anglers have always guarded their secrets. However, as college fishing evolved, so have the McKendree members, who are now “confident in multiple techniques, and finding and catching fish with each,” and anxious to “build and share on each other’s knowledge,” according to the coach.

Winning Team of the Year quickly proves the effectiveness of such an approach.

In addition to their performance on the water, the McKendree team has excelled in other areas within the fishing industry. Members have embraced the St. Croix Rod scholastic program, employing the finest rods in the industry to excel in the highest level of competition, and offering frontline insights in return. In addition, many former McKendree team members now work full time in the fishing world; one is even a college fishing coach, himself.

Rinderer confirms that turnover of athletes is always a concern for any college coach. “We have six new freshmen on the team this year (2019-2020), and four of my top guys from last season have graduated”

With such an overwhelming team concept trickling from the top down, however, there’s likely little room for concern. After all, proof is in performance. Once a perennial bridesmaid for School of the Year, McKendree’s unique team concept has pushed them over the top, and should threaten to do so for years to come.

As of the date of this release, McKendree is sitting in second place in the 2019-2020 School of the Year standings, well within striking distance of a repeat.​