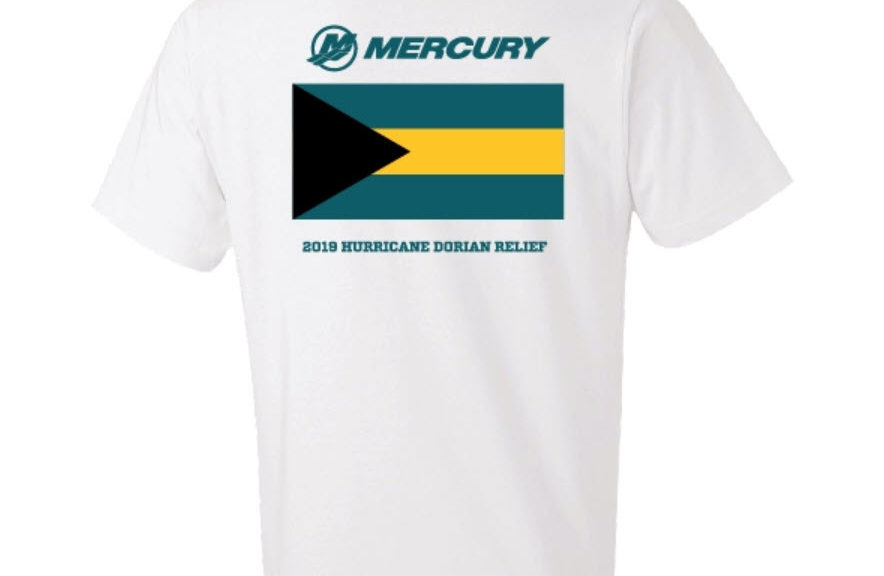 FOND DU LAC, Wis. (Dec. 4, 2019) — Mercury Marine, a division of Brunswick Corporation (NYSE:BC), today announced that proceeds from sales of a special, Bahamas‑themed T‑shirt have resulted in a donation of more than $15,000 to the American Red Cross in support of Hurricane Dorian relief efforts. With a pledge to donate the profits, Mercury began offering the shirt at its apparel website, MercuryDockstore.com, shortly after Dorian hit the Bahamas in early September. The shirt was in such high demand that Mercury decided to keep it available through mid‑November.

“Many of our customers were affected by the storm and it is our responsibility to do whatever we can to help,” said Michelle Dauchy, Mercury Marine chief marketing officer. “Threds, Inc., our partner in hosting and managing the Mercury Dockstore, played a huge role in conceiving this initiative and spooling it up quickly. The generosity of everyone who purchased the shirt, many of whom were inspired by some outstanding social‑media engagement by Mercury’s partners, made this fundraising effort a big success.”

“There was a snowball effect,” said Stuart Halley, general manager of Mercury Racing, a division of Mercury Marine that specializes in high‑performance marine engines and accessories. “Nor‑Tech provided the T‑shirts to its employees, who wore the shirts and gathered in front of one of their boats for a photo. The company posted the photo on Facebook with a challenge to fellow luxury performance boat builder Marine Technology, Inc. to do likewise. From there, the challenge spread to Fountain Powerboats, Cigarette Racing Team, Outerlimits Offshore Powerboats, DCB Performance Boats and even powerboating media outlet speedonthewater.com.”

The T‑shirts featured Mercury Marine branding, a line‑drawing map of the Bahamas, the Bahamian national flag, and the words, “2019 HURRICANE DORIAN RELIEF.”

With sustained winds of 185 mph, Dorian was the strongest hurricane on record to strike the Bahamas. Moreover, the storm transited the island nation at an excruciatingly slow pace, lashing it with Category 5 winds for more than 22 hours and causing up to $3 billion in damage.

« INDUSTRY NEWS: More Females in Fishing
Who made more an angler, a bull rider or a bowler? »