Neither Wind, Rain, Nor Waves Stopped Erdman And Hurst From First Place At Day 1 Of AIM At Oconto 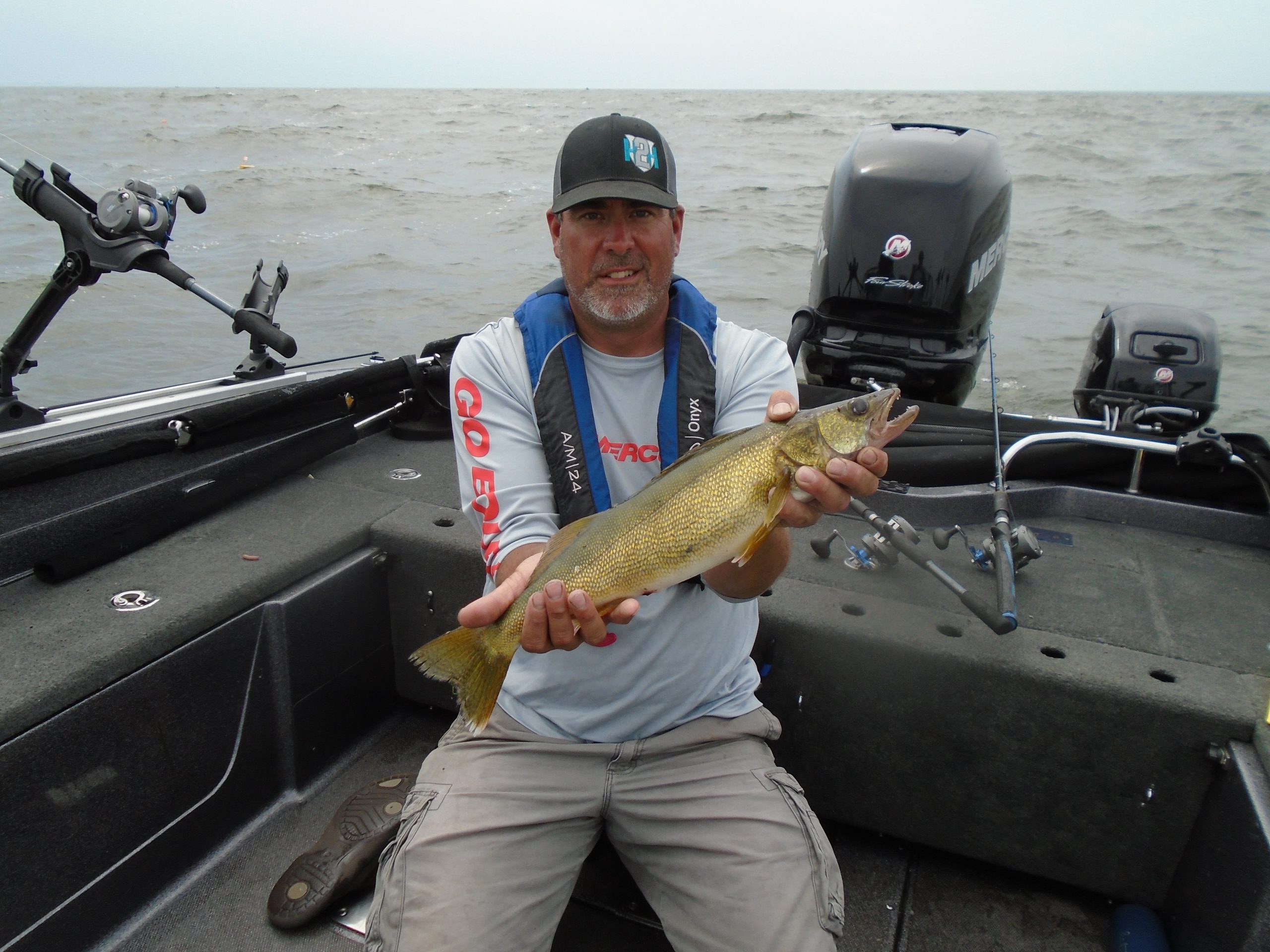 The question earlier this week was, do you turn left or right, and Jim Erdman and partner Jeremy Hurst answered it, turning south to harness the mud bite south of Oconto on Green Bay, collecting 42.80 pounds and $8,000 in the AIM Weekend Walleye Series/ Garmin Open  Saturday, July 18, one of two final back-to-back Wisconsin qualifier tournaments this past weekend.

“It was a pretty rocky start, with storms delaying the launch and big waves until mid-day, but the two got it done using crawler harnesses about 12 miles from the start,” said Denny Fox, AIM national tournament director. “This was the first of two final qualifiers prior to the Wisconsin championship at Lake Winnebago on Aug. 21 and 22. 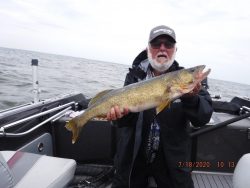 “Our side pot of $100 per team brought 26 teams to enter. It’s won by the highest placing teams entered in the side pot. The first-place team in the pot gets 50 percent of the pot, and 30 percent goes to the second-highest placing team entered,” Fox said. “Third highest gets 20 percent. Erdman and Hurst also got the first-place side pot for another $1,300, so it was a great payday for them, as well as the other two teams.”

While many of the teams turned north for hoped-for big fish, Erdman and Hurst, both from Oshkosh, joined about half the field after the storm delay and pounded south to the mud flats in their Mercury 300 Verado-powered boat, but they were always apart from most of the boats. The other half, they said, seemed to turn north. They were by themselves for much of the day, on a pod of fish that Erdman had found Wednesday and checked their location every day. Saturday’s weather, however, made zeroing in on them again hard.

“We’d check on them every day and on just one pass through we had between 30 and 35 pounds every time. We knew we could get at least one big fish and actually we caught bigger fish in practice there,” Erdman said. Then the storms made for a slow ride down. They finally set up about 8:40 a.m.

“We made our first set using Offshore Tackle inline planer boards and our line was on the wrong waypoints. We caught a catfish, followed by a sheepshead. We picked up and moved. After that we never caught another junk fish all day,” he said.

“Our first fish came, and it was a 26-1/4-incher at 10 a.m.  After that we had a bunch of 20s and 21s. We knew the bite didn’t go early, so we stayed with our spinners. By 11 or 11:15 the wind picked up. We had our kicker in reverse and the bow motor pointed backward to slow us down,” he said. Their target speed was around 1.8 mph. When the duo would see pods of fish on the bottom as they trolled past, they would throw a Shiver Minnow from Moonshine lures at them and pick one up here and there. They use #3’s for this.

After noon, the wind finally began to lay down and the pair slid into that pod, and from then on it was constant action.

They knew this wasn’t just another day on the water. It was special. But, they also knew that this was Green Bay, where a 50-pound day, especially from the north, wouldn’t be surprising.

“We’ve been fishing together since we were 3 or 4 years old, so this was a lot of fun,” he added.  “If it had been going on up north, we probably wouldn’t have had a shot.” What will be just as fun will be competing in the upcoming state championship.

The second-place son-father team of Kevin Wetmore and father Tim, of Wisconsin Rapids, also headed south, hanging about three miles north of a large group of boats by what locals call the “shark fin,” a spot of structure in those long mud flats. They too pulled harnesses, looking for pods of roaming walleye.

“That was about it. We didn’t have a whole lot going on during pre-fishing and found them Thursday afternoon, a pod that was worthy of checking out. We scoped them and pulled in two we marked and left. They were probably around five pounds, and they weren’t as big as we got on tournament day,” Kevin Wetmore said.

“We felt we could do 25 to 30 pounds, and we got more. The fish got bigger the longer we stayed. We pulled spinners and crawlers and never changed our plan,” he said, even when the bay rolled up three- to four-footers.

At one point a couple of other boats showed up, but he wasn’t sure if others were around, since, he added, “there was a lot of up and down action, and it was tough to see.”

This was the pair’s highest AIM finish, and they definitely will be at the state championship on Winnebago next month.

The third-place father son team of Cole and Guy Engebretson of Wausau finished with 36.43 pounds and $2,000. The also took second in the side pot for another $780. The third-place side pot went the team finishing in sixth place, Lynn Niklasch, Oconomowoc, and Mark Kumorkiewicz, Pleasant Prairie. They will split $520.

Fourth in the event went to Gary and Grace Mongelli of Suamico. They boated 35.82 pounds, good for $1,700. In fifth were the eventual second-place finishers on Sunday, Isaac Lakich of Richfield, and Tristan Beckwith of West Bend, with 34.53 pounds, earning them $1,400.

What a unique, and crazy good qualifier season for Wisconsin that will be capped by a great state championship in nearly a month from now on ‘bago. Watch for the re-cap of Sunday’s final state qualifier, as well as all the action still coming up in Minnesota and North Dakota, with all the details at AIM’s Facebook page.

Want to enter one of AIM’ remaining state qualifiers? All the details are at the AIM website.