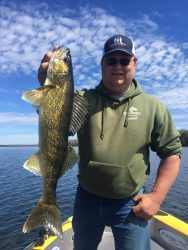 A 43-year-old media expert and avid walleye angler is the new AIM Weekend Walleye Series (AWWS) North Dakota tournament director, promising to bring his expertise as well as in-depth knowledge of the “NoDak fishing culture” to move AIM’s presence there to the next level and beyond.

Geremy Olson, of Washburn, ND, situated along the Missouri River between Garrison, site of several AIM tournaments, and Bismarck, site of the upcoming National Championship Shootout May 31-June 1, is the second North Dakotan to be tapped for an AIM leadership role since October.

“We are extremely excited to have Geremy aboard as the new face of AIM North Dakota,” said AIM National Tournament Director Denny Fox. “He knows what North Dakota anglers want. He’s well-known both in-state and in the media. And, what’s more, we didn’t need to go find him. He came to us. That’s always a bonus. Geremy is a busy guy, but as the saying goes, when you want something done, find a guy who’s busy to get it accomplished.”

Olson’s main job? Help grow the North Dakota Division to match the prominence that walleye fishing holds in that state. He will be in charge of all four 2019 divisional qualifiers, plus the state championship, and also will attend the National Championship Shootout.

“Growing up near Minot, I learned to fish on the Missouri system, and I’ve been fishing as long as I could hold a fishing rod in my hand,” Olson said.

“I was the kid who never got in trouble because I was too busy fishing.” He’s also guided in Minnesota’s Boundary Waters.

Olson comes from a varied work background. He became an inspirational speaker after suffering serious injuries during a range fire while a volunteer fireman, which left him in a wheelchair for three years.

He also is in the ministry, is an author, and works wildfire prevention. He also is involved in live event and video production as owner of 241Ink Productions. His experience includes local projects, the Republican National Convention and other national events, most recently with the National Professional Anglers Association. His company’s expertise also will be seen at AIM events this season. He holds degrees in both broadcasting and bible from Northwestern College in St. Paul, MN.

“The biggest thing I bring to AIM is, this is my home state. I bring a level of professionalism that’s going to greatly impact and help AIM. I’m very tuned in to what I call the North Dakota walleye fishing culture, and I’ll be better able to communicate with anglers throughout the state about what AIM is, and its goals,” Olson said.

“AIM has a great format that is the future of fishing. It’s a super simple way to have fun, catch big fish and even win some money without harming the fishery of any lake AIM comes to.”

This season that will include the first NoDak AIM state championship qualifying tournament May 12 on Lake Sakakawea. Stay tuned for more news at AIM’s Facebook site. The season begins April 7 on Wisconsin’s Fox River at Green Bay. For info on all AIM events, including how to register for this year, go to aimfishing.com.

Anglers Insight Marketing LLC (AIM™) is a unique tournament organization created and owned by many of the most accomplished and recognizable professional walleye anglers, along with others who share the mission of advancing competitive walleye fishing and making it sustainable into the future. AIM is committed to marketing excellence on behalf of its tournament competitors, the tournament host communities, and the brands that partner with it. AIM is also committed to maintaining healthy fisheries across the nation by the development of the exclusive AIM Catch-Record-Release™ format which is integral to its dynamic events and unparalleled consumer engagement.