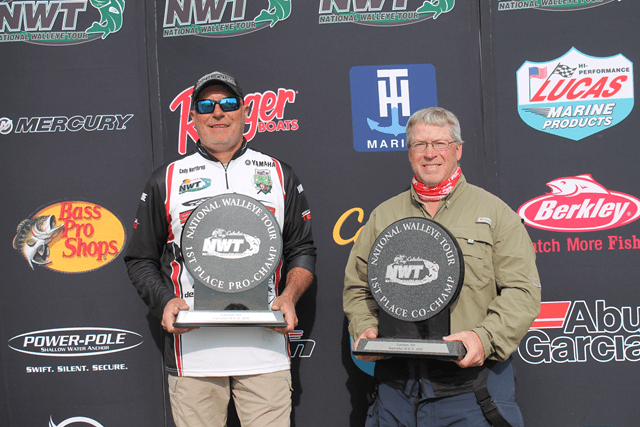 Cody Northrop, of South Heart, North Dakota, weighed a combined total of 50.91 pounds to win the National Walleye Tour Presented by Bass Pro Shops and Cabela’s event at Garrison, North Dakota, September 11. Northrop won a fully rigged Ranger 2080MS with a 250-horsepower Mercury outboard, $15,000 in prize money and $3,003 in Anglers Advantage cash for a total of $82,598 in winnings

The dock talk leading up to Sakakawea was that trolling leadcore with Berkley Flicker Minnows was going to dominate. That all changed in practice when Mother Nature threw a nasty cold front into the mix, complete with freezing temperatures and relentless winds. Instead of trolling, casting and jigging took over post front, and Northrop was one of the first to adjust.

“The west end, from McKenzie Bay to New Town, that’s my home water,” said Northrop. “My main spot was 60 miles from the ramp in the Van Hook Arm. It was a submerged island 5 miles north of Shell Village.”

On day one, Northrop fished the outside edges of the island in 35 feet of water. On the final day, a southeast wind pushed the bait up to 20 feet. When the day started, Northrop was not necessarily swinging for the fences.

“I’ve had three tourneys this year with good first days, and then I fell off the second day,” said Northrop. “I was just going to put weight in the box today. My first fish was an 18-incher, which I kept. Then I caught a 23- and 20-incher, both of which I kept. Then I drifted 40 or 50 feet down the island. That’s when I hit the bait, and it went crazy. I’ve never seen that much bait in that area. It was thick from the top of the screen to the bottom. I saw that, and I knew it was going to be game on.

At that point, Northrop knew he wouldn’t go backwards in the standings, but he wasn’t sure he was going to win. Either way, his day was finished as anglers are permitted to keep eight walleyes and weigh their best five. Culling, or upgrading, was not permitted. His official weight for his best five was 28.20 pounds.

“I didn’t know I was going to win. I really thought the rest of the lake would fire up.”

Northrop’s main bait was the No. 9 Rapala Jigging Rap. Custom greens and whites (from Alex and Christina Gorske at Team Ultimatum Customs) were the best colors. While he would vertically fish the Jigging Rap, he would dead stick a 4-to 6-inch creek chub on the bottom. Of his 10 weigh fish, eight came on the Jigging Rap, and two came on the chub. Today, all his fish came from the sunken island, but on day one he upgraded an 18 and a 16 from milk-run spots on the way back to the ramp.

“These fish are so full of smelt that it takes a big bait to get a reaction bite out of them,” said Northrop. “The key to the win was just my knowledge of this lake. I’ve fished this spot numerous times before in tournaments. I think the MWC was won on this spot earlier in the year. But in all my years, I’ve never seen it light up with bait like today.”

Brad Heim, of Bismarck, North Dakota, took home top honors in the Co-angler Division with a total weight of 46.73 pounds. On day one, he fished with Jason Votava, and he was paired with Dustin Kjelden on the final day.

The next stop for the NWT is the three-day championship set for October 14-16 on Lake Erie at Huron, Ohio.