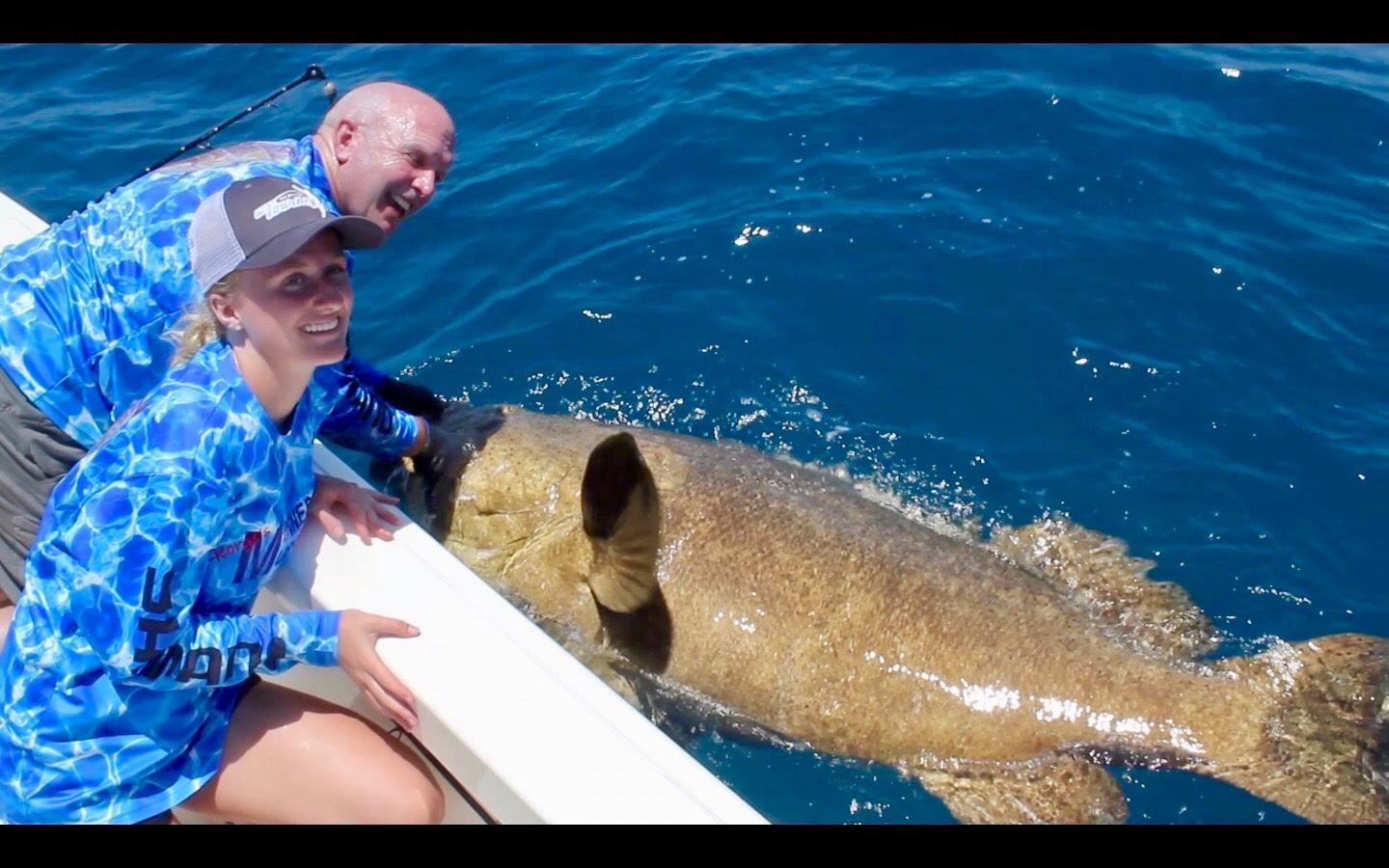 A 29-hour drive to escape the Minneapolis riots had landed fishing guide Paul Hartman and his family in Marco Island, Florida. On May 31, Hartman, his wife Kimberly and stepchildren Reegan and Owen Werner would be 50 miles out in the Gulf of Mexico, wrestling a record-class goliath grouper. Before the battle ensued, they’d watch the mammoth fish bite on the screen of their Aqua-Vu underwater camera.

Early in the day, on the way to their offshore fishing spot, Hartman and family had tried to catch a few amberjack for grouper and shark bait. Each time they hooked one, however, a barracuda attacked and stole their prospective bait. After boating two of the big ‘cuda, Hartman finally decided to cut the tails off the toothy fish, and rig each on a 12/0 circle hook in hopes of tempting a hungry shark or goliath grouper. Attached to heavy-duty rods and Penn International reels loaded with 250-pound braided line, the baits plummeted into 50 to 70 feet of water. 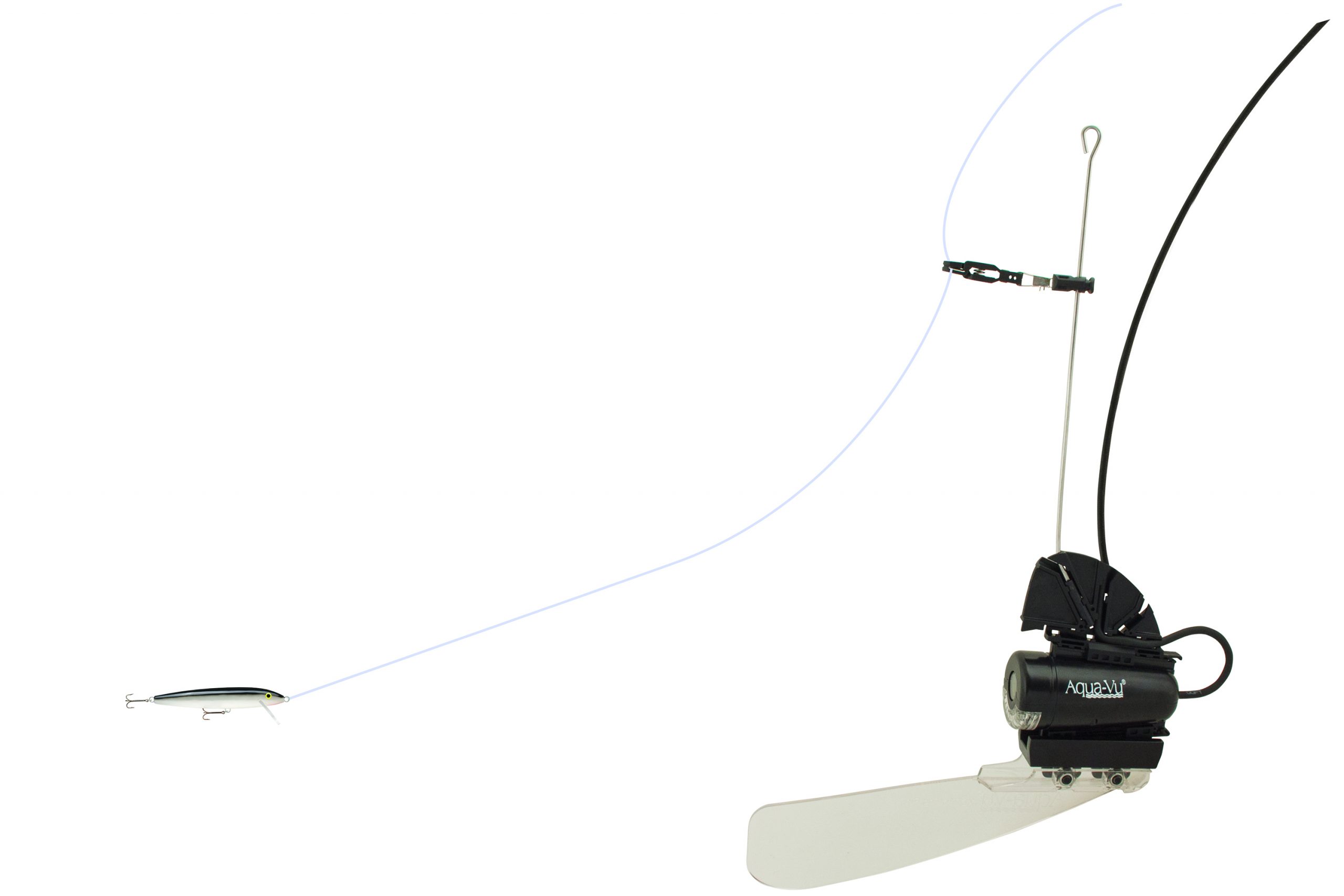 Endeavoring to witness and record the actual bite, Hartman and his son attached one of the fishing lines to the “Live Strike” release clip connected to the lens of an Aqua-Vu HD10i Pro camera. “We had rigged the camera to face at about a 45-degree downward angle, keeping the lens just a few feet above the bait,” said Hartman, a well-known fishing guide specializing in trophy muskellunge back in Minnesota. “We watched on screen as the big chunk of ‘cuda sank down toward bottom. Almost right away, my son Owen excitedly described the action as he watched a massive grouper charge over and eat the nearly 50-inch bait in one big gulp.”

“When Owen saw the fish coming, he screamed, ‘It just ate the whole thing! The whole entire bait is gone!” recalled Hartman. “I reeled down, got the fish hooked and the fun began.” 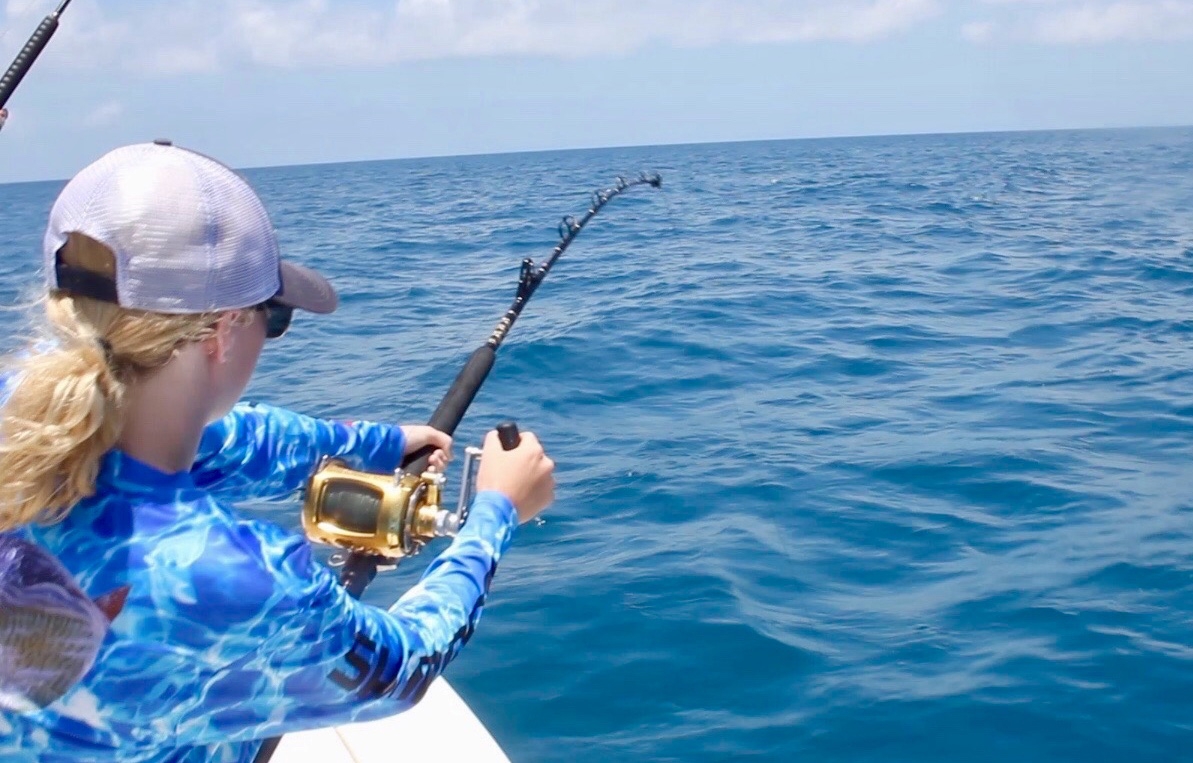 Unfortunately, in the heat of the moment, the family forgot to hit the record button and failed to capture the underwater video with an attached recording device. “But watching that giant grouper engulf the entire bait in one powerful snap has given us ample incentive to try again. What an experience!”

Equipped with 125-feet of heavy-duty cable, the Aqua-Vu HD10i Pro high-definition underwater camera houses internal weights and allows the user to attach additional 1-pound weights as well as the XD Live Strike™ accessory, via Aqua-Vu’s Quick Attachment system. In effect, the camera acts as a weight, pulling the bait toward bottom.

The Live Strike accessory slides easily onto the camera lens housing, terminating with a downrigger-style line clip. Anglers can instantly attach their fishing line to the release clip and monitor the lure or bait on the LCD display above. When a fish strikes, the line is effortlessly pulled off the clip for a direct rod-to-fish battle. The Aqua-Vu XD Live Strike system is the only fishing-ready video device that allows for full HD viewing of lures and striking fish in real time. 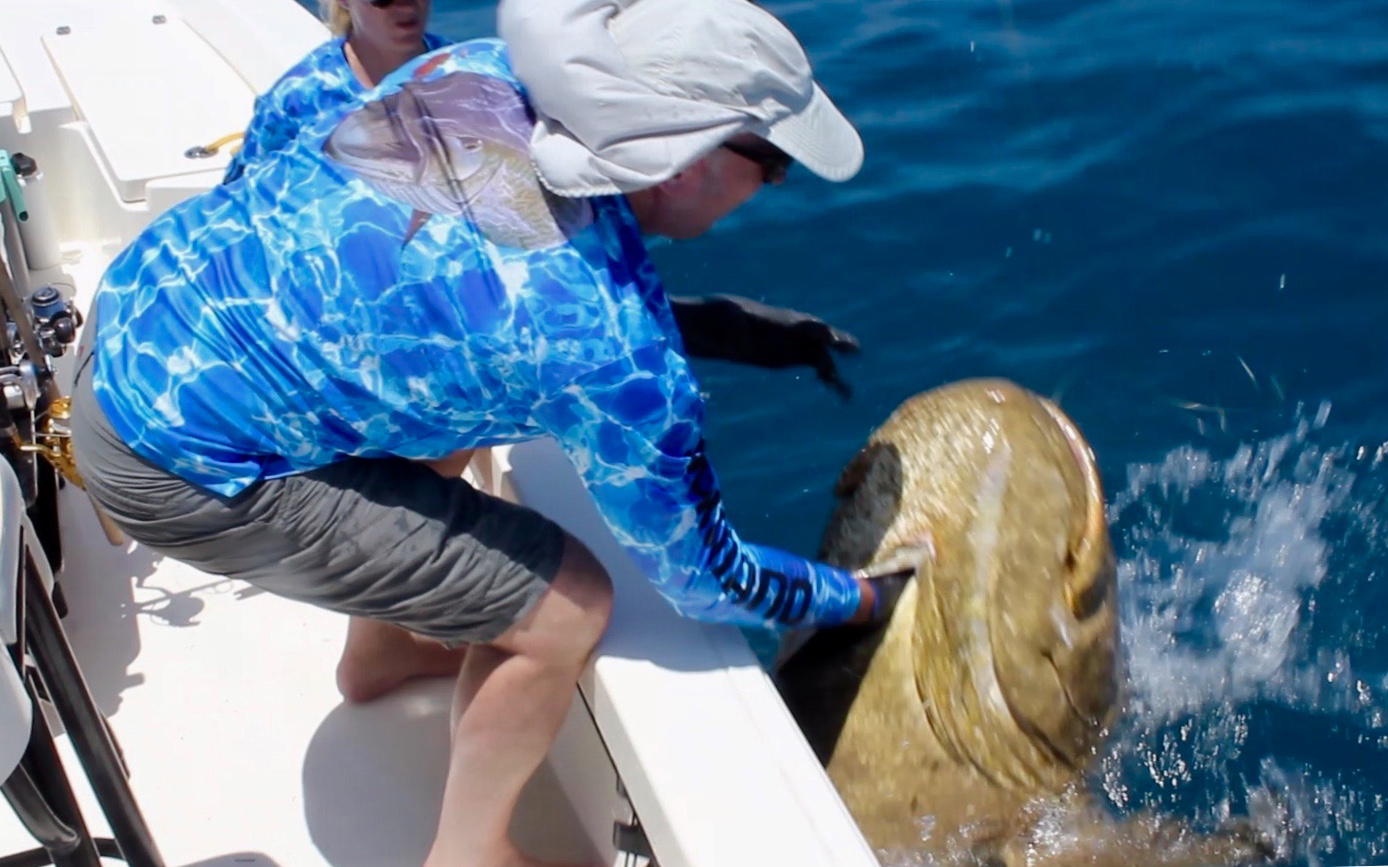 “Having just witnessed the sheer size of the animal as it swam over and engulfed the bait, Owen was buzzing with excitement,” recalled Hartman,” “That got us fired up, too. I asked Kimberly to back the boat away from the structure, while I gently towed the unsuspecting fish to smoother bottom, where it would be more difficult to wrap the line around an obstruction and break off. As Reegan strapped on the fighting belt, I handed her the rod and told her to get ready for a battle.

“Once the fish realized it was hooked, it began thrashing and surging. Reegan is an athlete with lots of competitive spirit, but at 115-pounds, she was in for a major challenge versus a fish five times her weight. After just ten minutes, with assistance from her brother Owen, Reegan managed to get the fish up off bottom and in to view, so we could get a good idea of its enormous size. After working the fish hard for another 5 minutes, I was able to grab the 400-pound test cable leader and begin measuring the fish boatside. We got the hook out, took a few photos, and let the fish give us shower as it kicked and swam back to the depths.”

Later, looking at the photos, Hartman realized the goliath grouper was almost certainly the same fish caught by a friend in April of 2019, a specimen named My Lord. Just 14 months later, the fish had grown three inches and gained 50 pounds, now measuring 83-inches long with a 75-inch girth and estimated weight of 583-pounds. According to the International Game Fish Association, Reegan Werner’s fish was the largest grouper ever caught by a female angler.

“The first time my friend Captain Ben Olsen saw the fish, all he or his crew could say was ‘oh my Lord, look at that!’” said Hartman. “Eventually, the name stuck and when we got back in and looked at our photos, we realized, the fish was indeed the same one.”

“It’s not like these fish are super abundant,” Hartman added. “You can find five to ten fish living on one particular structure. But then you might not find another big grouper for 30 to 50 miles. Releasing these fish safely and carefully is a must. Who knows, next year, we might come back and watch My Lord eat on the camera again. Who knows how much bigger she’ll be. This time, you can be sure, we’ll hit the record button.”