Opportunity Knocks: Jesse Wiggins Reflects on The Bassmaster Classic How the St. Croix Pro seized the opportunity to climb the ranks 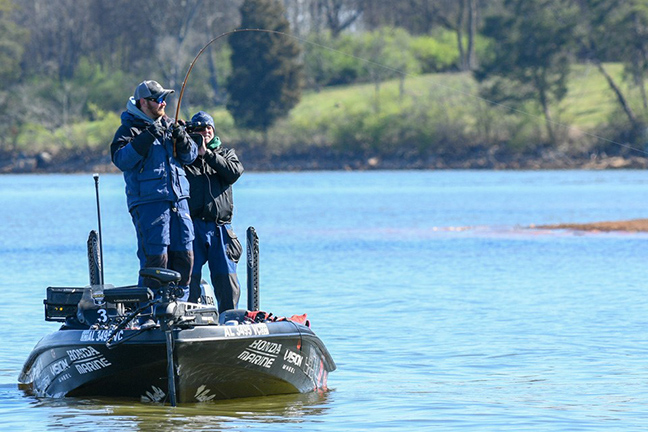 Park Falls, WI (March 3, 2019) – St. Croix bass pro Jesse Wiggins just finished competing in the biggest event in bass fishing, the Bassmaster Classic held on the Tennessee River in Knoxville, Tennessee, placing third, just behind champion Ott DeFoe and second place finisher, Jacob Wheeler. It was a narrow margin of total weight between these three anglers, which literally came down to who had the best bites and was able to capitalize on each and every opportunity at hand to land a fish. Such calls into question how tournament anglers prepare for and act on opportunity.

For example, Wiggins had been busy for weeks and months preparing his gear and mindset for this tournament of tournaments. Wiggins’ third consecutive Bassmaster Classic, he says a big part of that was choosing the right rods for the prevailing combination of presentations and locations fished.

Wiggins often plays the Legend Glass card when the pot calls for crankbaits.

“When it comes to the Bassmaster Classic, you have to control everything you can control, including all your equipment. In terms of rods, I only use the best stuff possible so when I do get a bite I can land it. Each cast is critical and you absolutely have to be able to land a fish when given the opportunity. I know with St. Croix rods there is no weak link.”

And when it comes to fishing crankbaits, Wiggins says there’s nothing he’d rather be fishing than fiberglass—and for a number of reasons that help him make the most of every cast.

“It’s hard to believe how sensitive Legend Glass rods are. With most glass rods you lose sensitivity, but not with Legend Glass. They’re so sensitive that you can throw flat-sided crankbaits which don’t have a lot of thump—which is the reason you throw them in the cooler waters of pre-spawn—but you can still feel their minimal action with the St. Croix Legend Glass so good you can tell if your bait is ever getting fouled by a leaf, stick, or anything else. Feeling that immediately so you can get your bait back to running right is a key deal in tournaments where you absolutely cannot waste a single cast. Being able to feel the bait at all times plus having the glass rod so the fish can load up on the bait are two significant reasons I’m such a big fan. Fiberglass rods are also great casting tools with a moderate action that makes their use with baits like crankbaits and chatterbaits ideal. Of course, this moderate action also comes into play when fighting fish and keeping them buttoned to land without fish getting off. Those reasons and more are why I chose St. Croix fiberglass rods as my primary tools for fishing the Classic. They’re almost like an insurance policy.”

Wiggins expected the fish to be in full pre-spawn mode and in terms of location had key spots pretty much dialed in from the get-go.

“It was pretty simple for me once I got there and saw the water color and temperature. I knew if I was going to catch them it was going to be a shallow crankbait deal. So, I had two main rods on deck—the 6’10’’ medium heavy moderate St. Croix Legend Glass LGC610MHM and the 6’10” medium power moderate St. Croix Mojo Bass Glass MGC610MM TARGET CRANKER. I had those two rigged up and when practice started I started catching them immediately with shallow-running crankbaits. With those rods, I used anything from a little flat-sided shallow-diving crankbait, square bill, and anything that dove to about ten feet, all on 12 pound Seaguar AbrazX fluorocarbon line,” says Wiggins.

“Given the areas I was practicing in, I figured it was going to be tough. I was fishing in the creeks and flats but I knew the bigger bass would be coming off the main river to spawn, and that’s exactly what happened. Part of why everything played out so well for me is the time I took preparing my rods, baits, and overall plan of attack, which you don’t have to be a professional angler to practice. Preparation can help any level angler make the most of whatever bite’s at hand. There was no question that I could rely on my equipment one-hundred percent so I could focus on putting fish in the boat. And it got better and better each day of the tournament. On days two and three I got some big bites and put myself back up there in the running. It wasn’t quite enough to place first or second, but I’m incredibly happy with how everything turned out. I was only a couple bites away from the win.”