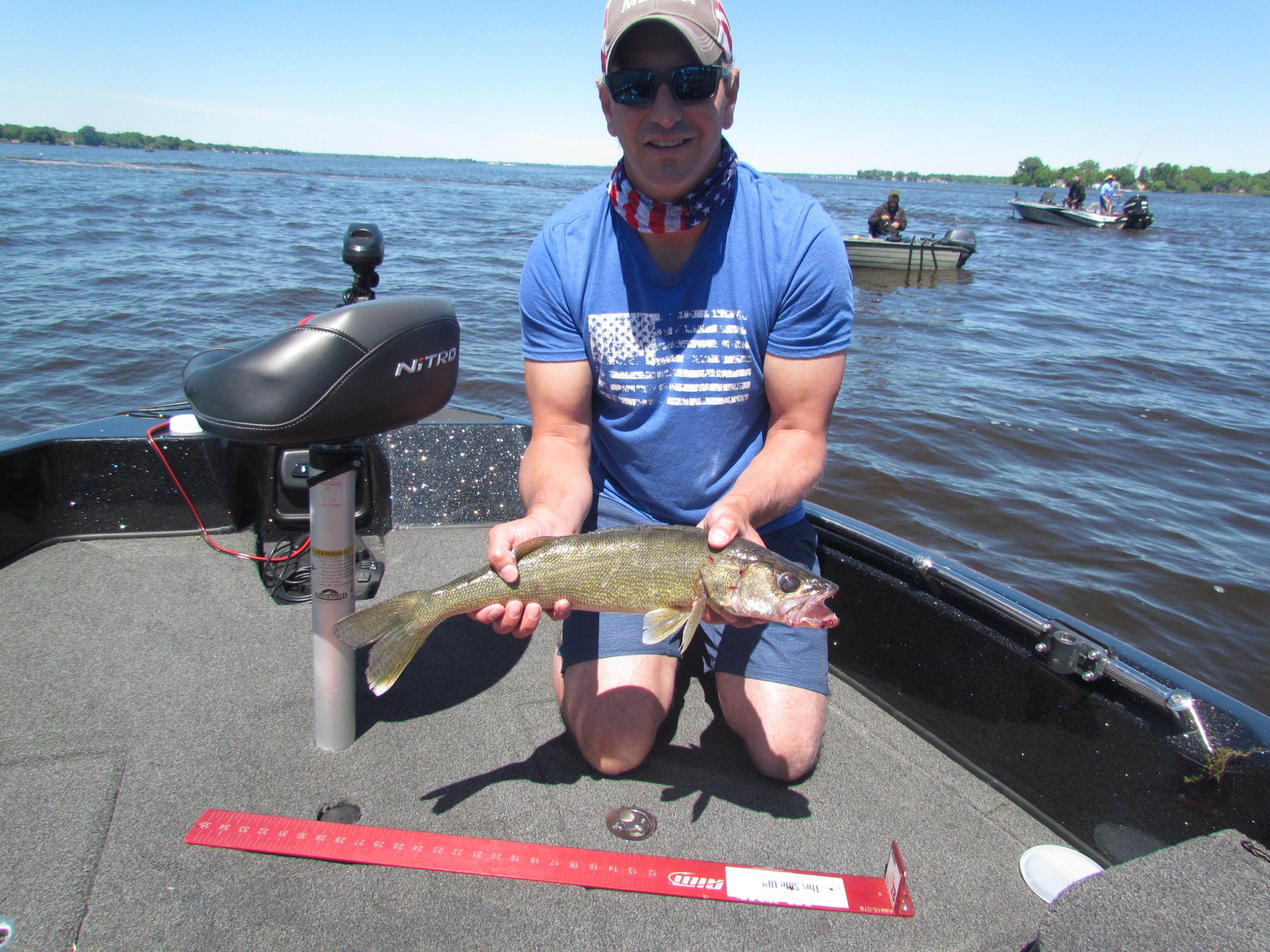 Cousins Michael and Brandon Popp didn’t have to travel too far to find the fish they were looking for, as they took the first of two Wisconsin Qualifiers of the season in the AIM Weekend Walleye Series/Garmin Open Saturday, June 6 to win $8,000 and first place by less than a quarter-pound.

Cousins Michael Popp, from North Fond du Lac, and Brandon Popp, of Fond du Lac,  did it in Michael’s Watercraft powered by a Mercury 350 Verado, both pulling Berkley Flicker Shads and Salmo Hornets and  jigging leeches at two different spots on the lake, just south of Winneconne, to boat 17.19 pounds, good for an $8,000 payday. The pair only fished Day One of the ‘Bago dual duel. They’ll also cash a few more checks, as they were using Garmin Livescope (good for a $500 bonus incentive alone) fish finder to keep them on walleye while jigging, and Offshore planer boards when they got their clinching fish later that day.

Michael said that his nearly life-long familiarity with the system definitely helped him eliminate water, and zero in on two spots: that U.S. 41 bridge that’s so popular with anglers, and one point on Butte des Morts were what brought home the cash, and those all-important points towards Team of the Year. Problem is, this is the only AIM Wisconsin event they’ll fish—at least this year. They WILL be back in force in 2021, he said. Here’s how they clinched.

“Pre-fishing, we didn’t do a whole lot in the upper lakes,” he said, concentrating instead on Lake Winnebago, and the Fox River near Oshkosh.

“We had decent fish but not great. On the last day before the tournament, we did fish the cane beds (on those upper lakes) and made a pass on one of the points on Butte des Morts and caught some nice fish.” With that in their back pockets, come game day Saturday, they headed towards the end of that lake to start at the U.S. 41 bridge. The reason that bridge is so popular, he said, is the rock that walleye like is there, and the channel narrows, meaning if you were a fish and want to head downstream to Lake Winnebago, that’s the way to take. They may have hoped to finish there, too, but it didn’t work out that way.

“We went a long time without even getting a short fish or a trash fish, and then the wind picked up from the north. We weren’t very far from that point so we went there and trolled Flicker Shads and Salmos. We set up on our first pass and there were a bunch of local guys in there anchored and jigging, so we hugged the outside, and found there were fish there, too,” he said.

They had time to make one more pass to see if they could upgrade but weren’t able to and decided to check in early.

“We knew that the way it was going we had a pretty decent bag and we’d hope the top three to five at least,” Michael said. Brandon was guessing top three. They were both wrong. Back on shore, they said they didn’t hear of anything bigger, which added to the wait until totals were announced.

“It was a stressful three hours waiting until Denny posted it at 6 p.m. and that’s when my wife was looking at the Facebook page and she said, hey, you won!”

The Popps said they plan on signing up for all AIM Wisconsin events next season. It was only their second AIM event ever. “I really like how it’s done and the C-R-R (Catch-Record-Release™). It’s a fair playing field and I like the fact that you don’t kill fish. I’m a big advocate for it.”

“On Saturday we pulled shiny No. 5 Flicker Shads by the river mouth in Oshkosh, and then went into the mud. We started in the morning on the lake. There’s a little hump that’s not on the map (he said later it’s off the former site of the Pioneer Inn) that I like fishing. We pulled over that hump and on our first pass had two boards go back, and we put a 21-1/2 and a 16-3/4-incher on the card. We re-set and pulled over again and got a 19-1/2 and a 14-3/4. So we’d pulled over it twice and had two doubles,” Schneider said. But, that was it. They tried a few more passes and caught smalls.

“We went to our spot on the mud and about 10:45 or 11 we had a board go back pulling harnesses, and got a 26-3/4-inch fish, which could be the big fish of the day, and I said to Brian that we’ve got a really good weight and it’s only 11:30. If we could put two more good fish in we have it won, but we could never do it. You’ve got to remember that we launched out of Winneconne and we had come all the way to Winnebago. We left about 1:45 to have a lot of time to get back. So, you take away about two hours of your fishing time when you’ve got to travel that distance,” Schneider pointed out.

In fourth were Ken and Grant Groeschel of Malone, WI, with 13.93 pounds, and in fifth and winning $1,300 for 13.37 pounds were Mike Blanck, also from Malone, with Dan Bodinger, Chilton.

Stay tuned for the wrap-up of Sunday’s tournament, where wind on a bit-choppier Lake Winnebago played a role.

As we are still doing, please follow government guidelines regarding COVID-19, and stay tuned to both our website and our Facebook page for that report, as well as AIM’s upcoming return to Mille Lacs after the National Championship Shootout just two weeks ago, for the first Minnesota Division qualifier of the season on this Sunday, June 14.